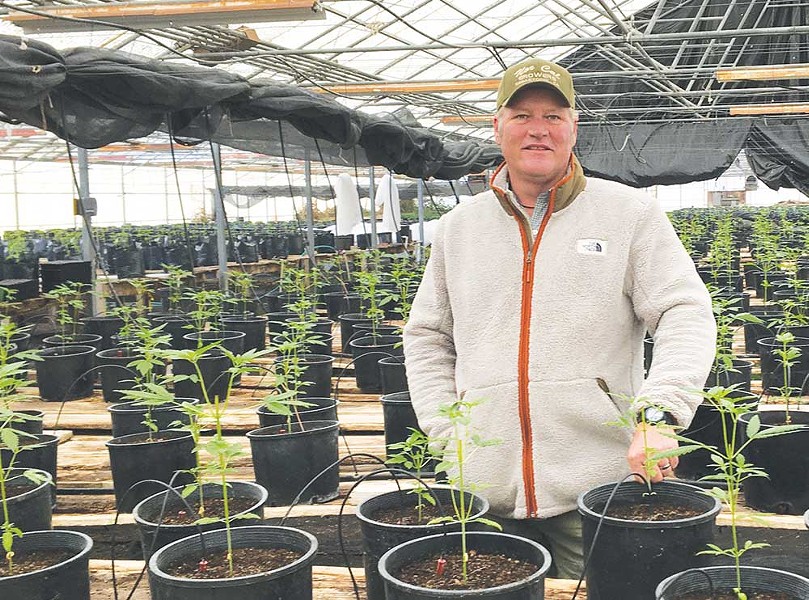 Vince Scholten, 52, is packing his bags.

He’s also putting the finishing touches to a half-dozen or so resolutions about weed, hemp and small farmers that he’ll take to the annual state-wide meeting of the Grangers in Sacramento. He’s been there before. He’s eager to be there again and rub shoulders with farmers from all over California.

A longtime organic nursery man, a Dead Head and a Burning Man veteran, Scholten has revived, over the past year or so, a dormant chapter of the Hessel Grange which is affiliated with The National Grange of the Order of Patrons of Husbandry.

“I have always grown medicinal weed for myself,” he tells me. “My goal has been to breed weed and hemp and sell plants to growers, but the county hasn’t allowed me to do that.”

The Grange was originally formed in 1867 to help farmers from Maine to Caifornia who were trying to eke out a living in the face of railroads and warehouses that set rates and gouged them. In the 1870s membership was close to a million. For a time, the organization was open to African-American farmers as well as whites. Women played leading roles, as did teenage boys and girls. Later, Franklin D. Roosevelt and his wife Eleanor belonged.

“We’re grangerly,” Scholten tells me. “We try to do things the Granger way, which isn’t the Trump way.” That way means discussion, debate and operating under the guiding spirit of inclusivity.

Scholten is the president of the Hessel Grange and the ag chair for the State of California Grange. His wife Lynn is the secretary of the local branch. An executive board meets and makes decisions. No other group anywhere in Northern California does what the Hessel Grange does; neither the Farm Bureau nor the Community Alliance with Family Farmers (CAFF), both of which steer clear of anything that smells or smacks of cannabis and hemp. (They smell identical.)

The Hessel Grange boasts 70 active members, all of them commercial weed and hemp farmers. The organization grew exponentially through word-of-mouth, though Covid-19 slowed the initial burst. A kids’ auxiliary is in the works.

The Grange on Hessel Road near Sebastopol is the only grange in California made up exclusively of weed and hemp growers who have banded together to survive the onslaughts of corporate cannabis and resist the power of local regulatory agencies, which for years have failed to issue permits in a timely fashion to applicants eager to grow their chosen cash crop.

For Sonoma County’s cannabis farmers, it’s as bad perhaps now as it was for the men and women who tilled the soil in the aftermath of the American Civil War and were squeezed by the robber barons.

“I knew that I had to take a stand and get farmers together to stand with me,” Scholten says. “It’s been challenging to persuade them to meet with one another because for a long time growers kept their heads down and rarely talked to one another. All by myself I didn’t carry much weight. With like-minded farmers we all have a chance.”

Three-and-a-half-years ago, Scholten applied for a permit from the county to grow cannabis. He still doesn’t have one, though in July 2020, late in the growing season, he was issued a permit to cultivate hemp. He’s growing it in a greenhouse at the back of his property which is nestled in the hills of West Sonoma County, where hundreds of acres of vineyards have replaced dozens of apple orchards. Monocropping bothers Scholten and the Grangers as much as anything else.

Just a few years ago, thousands of farmers grew cannabis in the rolling hills of Sonoma. But county officials decided that citizens who owned parcels designated Rural Residential (RR) and Agricultural Residential (AG) were ineligible for permits. Sholten calls that misguided policy “a shit show.” He adds, “Luther Burbank would be up in arms.”

Like Scholten, many of the members of the Hessel Grange feel they have their backs to the wall. That collective feeling stiffens their resolve and brings a goodly number of them to a meeting on a fall Tuesday evening. Under a dark, smoky sky, they pledge allegiance to the flag. Some Grangers puff on joints, others inhale tobacco. Many, though not all, look like they’d have been at home on a commune in the 1970s.

Sam de la Paz, who was born in Mexico and who’s bilingual and a techie, too, tells me, “Growers, like me, have been stuck in the hills and not as outspoken as we could have been.” To get the word out, and draw growers down from remote gardens, de la Paz created a Facebook page for the Hessel Grange and drafted an email list. He sends out “regular blasts.” He adds, “I’m trying to be the glue.”

Half-way through a Tuesday meeting, Sonoma County ag Commissioner Andrew Smith arrives by phone and tells the Grangers that they need a lobbyist in Sacramento, and that they also need to pressure the state to view cannabis as an agricultural commodity, like grapes and apples, not as an agricultural product like milk and eggs. “That’s the biggest thing to do,” Smith says. Clearly, he wants Sonoma to remain an agricultural county, and for hemp and weed to be cash crops, along with grapes and apples. If hemp and cannabis were treated as commodities, it would help to normalize the industry and make the rules more equitable.

David Drips did tours of duty in Kosovo, Afghanistan and Iraq, where he learned, he says, to “get up early, get the job done and curse like a sailor.” He thinks of the Hessel Grange as a “brotherhood and a sisterhood,” a “safety net” and “the collective political voice of the small pot farmer, which is louder than any individual voice.”

Drips grows weed on a windy hilltop west of Petaluma. Like his fellow Grangers, he loves what he does. “It’s good to be legal and out in the open,” he says. “When I go to my son’s school I put on a clean shirt. I’ve told the principal I’m a licensed cannabis grower. No secret there.” This November, Drips says, he plans to cast a write-in ballot for Elon Musk, the CEO at Tesla. “We need a third-party option,” he says. “If we pick a Republican we get fucked and if we pick a Democrat we get fucked. Trump gets things done, but they’re the wrong things.”

Scholten looks at the grape industry and at county bureaucrats in much the same way that the Grangers of the 1860s and 1870s looked at the railroads and the robber barons. “So far, Sonoma has chosen to be guided by the grape industry, and not allow hemp and cannabis to be cultivated here in any significant way,” he says. That’s a bummer for Scholten and everyone else in the Hessel Grange. But Scholten is looking forward to the state-wide meeting of the Grange in Sacramento. “It’s serious business,” he tells me. “We’ll be working the whole time.”

Jonah Raskin is the author of “Field Days: A Year of Farming, Eating and Drinking Wine in California.”