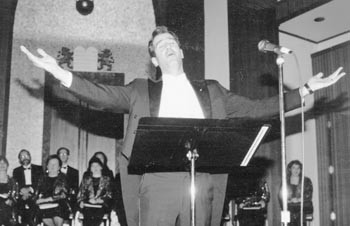 EARLY ON IN Cantor Mark Childs' spellbinding 90-minute performance last weekend, the celebrated visitor--making his first professional appearance in Sonoma County at an evening concert at Congregation Shomrei Torah in Santa Rosa--set the tone for the evening by excitedly acknowledging the presence of his large family.

"Not only my mother, but my entire clan of siblings is here," he announced, beaming as he pointed out three brothers and three sisters. "And each of them," he joked, "will be glad to tell you they taught me everything I know."

He then launched the show with a warm, joyful rendition of Algazi's "Hinei Ma Tov," taken from the scriptural text of Psalm 133, with the oft-repeated phrase "Behold, how good it is to gather together as family."

The theme of family--appropriate enough at this time of the year as Jewish families gather this week for the observation of Passover--was woven throughout Childs' eclectic repertoire.

Accompanied by pianist Bob Remstein, the renowned recording artist and full-time cantor--who has served for over seven years at Congregation B'nai B'rith in Santa Barbara--released his rich, powerful baritone on 17 songs, both sacred and secular, including an irreverent Tom Lehrer Hanukkah ditty and "The Ganze Mishpocha," L. Midler's hilarious homage to bar mitzvahs told from the point of view of an overwhelmed, sharp-witted 12-year-old boy: "They say my cousin's about to become a man/ Well then, what sex is he now?"

Childs, whose youthful energy and passionate performing style have won the singer increasing acclaim (think of him as the Bruce Springsteen of cantors), showed himself to be as comfortable with Jewish religious songs--which Childs affectionately refers to as "Jewish Soul Music"--as he is with Broadway show tunes and bluesy folk-rock. Having made a mark as an opera singer, performing Don Giovanni and Die Fledermaus with the Santa Barbara Grand Opera, Childs has gained scores of fans with the release of Cycles and Symbols, his remarkable folk recording of great Jewish masterworks.

In recent weeks, he's been touring extensively throughout the United States and Canada, almost always with Remstein's assistance. Remstein, it should be mentioned, is the composer and performer of "Theme for the Children," an instrumental piece on the recent compilation CD Love Shouldn't Hurt (Qwest/Warner Bros.), which benefits the National Committee for the Prevention of Child Abuse.

Childs' sense of humor and effortless singing style enriched the entire Sunday evening performance, part of a monthly music series at Congregation Shomrei Torah. Among the many lighthearted moments was a rendition of the rowdy boogie-woogie tune "Gefilte Fish": "What's that sitting on my plate? It looks like food that someone already ate."

An early highlight, paired with the dramatic and soaring Psalm 23, was the gentle Yiddish love song "Ven Ich Volt Geven." One verse, translated into English, claims, "If only I were a goldsmith/ I would make a wedding ring of pure gold for you/ and cover you with hot kisses/ But I am, after all, only a singer/ singing beautiful songs."

With no offense intended toward the goldsmiths of the world, we can all be thankful that Mark Childs, an artist of extraordinary power, is content to be "only a singer."