There's something new cooking up at Capo Creek 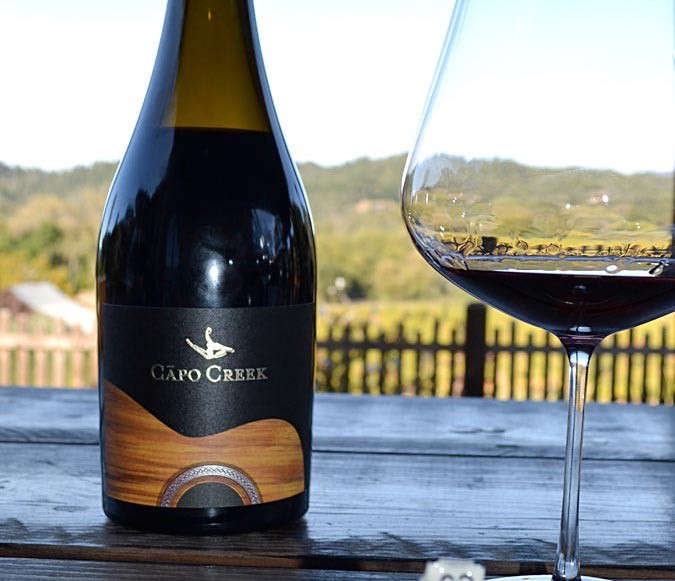 It's hard to imagine this corner of the world without Healdsburg.

But it was new to Mary Roy when, seeking a breather from an intense medical conference in San Francisco, she asked a hotel concierge where she could go to get off the beaten path, away from tourist-trammeled wine country. The answer was Healdsburg.

Some years later, just after Mary and her husband, Bob Covert, fired their realtor after a pricey prospect fell through, their new realtor said, "Would you try looking in Healdsburg?"

Hard as it is to imagine that a 50-acre parcel with a neglected old-vine Zinfandel vineyard, some run-down barns, and lots of potential, could still be found in 2014 in these parts, they found their dream property on Capo Creek.

The little seasonal stream didn't actually have a name, Mary explains while I sample a floral—but fleshy—2018 Grenache Blanc ($28), so they named it for the guitarist's clamp, capo tasto. They're big music fans, Mary explains, as the croon of the late Eva Cassidy wafts from the kitchen alongside savory scents. It's not a random play from streaming music: they named the vineyard below the rustically landscaped tasting area Eva's after one of Mary's beloved recording artists, and named the new planting of Rhône varieties on the hill above the handsome barn-style winery Eric's, for his. While the vines grow, Capo Creek's 2016 Grenache Noir ($52) is sourced from Carneros, but this cool and silky, mint-accented red is a standout rendition, sure to ease any worried mind.

Bob and Mary's dream-winery retirement project hit a few roadblocks along the way. It seems that wresting a building permit or two from the County is not the stuff of dreams. So, while Bob stays on in Chicago, where he's a noted neonatologist, Mary runs the winery with the help of her sister, with whom she formerly founded a radiology service.

"I don't want to just be serving wine to people," Mary says of her winery's approach to hospitality. There is no tasting bar. She does like to cook, however, and serves up a tasty little pierogi to pair with the plush, estate-reserve Zinfandel ($52), which she farms with organic inputs, though not certified as such. "I'm a doctor, so I don't do Roundup," Mary says.

It might be a good idea to upgrade from the one-hour tasting to the two-hour food pairing experience ahead of time. "People come here, and they never want to leave."