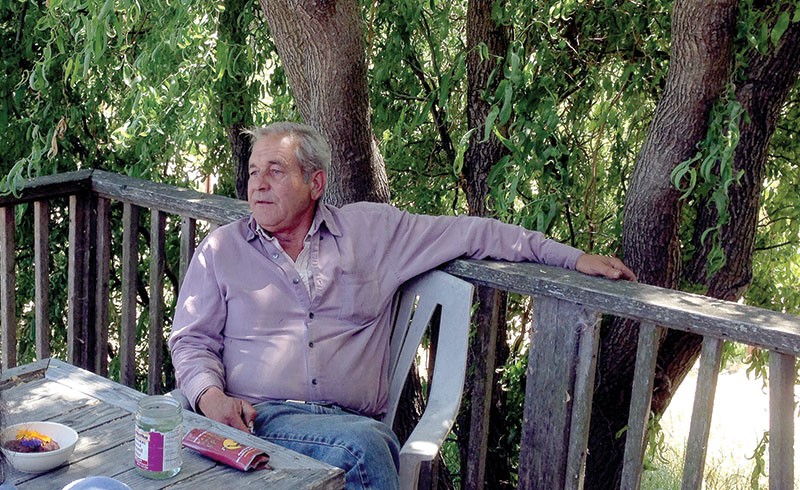 IIn the middle of a lecture on the second day of class for the new crop of Green String Institute interns, pioneering farmer, gardener and teacher Bob Cannard slams his fist on the handmade picnic table that serves as the outdoor classroom.

"First week of June, yellow wax beans, because I pay attention to nature!" Not one of the dozen of so students is surprised or concerned at this outburst—in fact, about half crack a knowing smile.

Cannard rose to fame in the farming community with Alice Waters, founder of Berkeley's celebrated Chez Panisse restaurant. Cannard continues to provide produce to the restaurant. Like Waters, Cannard cares deeply about how food is grown, pushing him to create his own "beyond organic" certification label, Green String Certified.

"We don't do anything non-organic, but we can't use the o-word," says Cannard. "We can't afford to be certified, and we're not inclined to get the blue stamp of the federales as a tattoo on our right cheek."

To certify the 140-acre Petaluma farm, which includes several acres of vineyards with partner Bob Cline, would cost about $200,000 annually and require four full-time administrative staff, says Cannard. Not just that, but farms can't claim to be above the standard set by the government. "You can't have anything that claims that you're better than organic," says Cannard. "That's unconstitutional."

Instead, he self-certifies. "It's based upon our integrity. You can believe us or not believe, it's up to you." He says it's a workaround that he hopes will catch on with other small farms.

Cannard's reverence for the soil and plants is almost spiritual. His respect for nature is evident in his gardening methods, which includes leaving many weeds to grow among his crops.

"One of the elements of physical completeness [of plants] is nutritional soundness," he says. "Another element is etheric sweetness. It had everything that it needed so that it can be a most wonderful kind of plant, whatever plant that it is.

A well-grown eggplant is a tremendous example," he adds. "A beautifully grown and perfectly ripe eggplant is the only fruit that I've ever picked that, once harvested, will for a few seconds vibrate with happiness in your hand. Just shimmers." After a pause, he adds, "Literally."

That intensity and knowledge draws in students every three months to participate in the Green String Institute's internship program. The current session of curious cultivators will live, eat and work on the farm for one season. Rebecca Winters, a 33-year-old 2013 graduate of the Green String Institute, came to California from Brooklyn, where she was a successful graphic designer. "There's nothing here that's not intense," she says, referring to life on the farm—as well as the flavor of the produce.

Top-tier restaurants know this and use that intensity to their plates' advantage. Petaluma's Central Market, Wishbone and Thistle Meats all routinely shop at Green String Farm for things like veggies, fruit and eggs. And it's not just for their customers.

"A lot of chefs shop here for their homes," says Winters.