A (Dining) Room with a View Awaits at Chalk Hill Estate 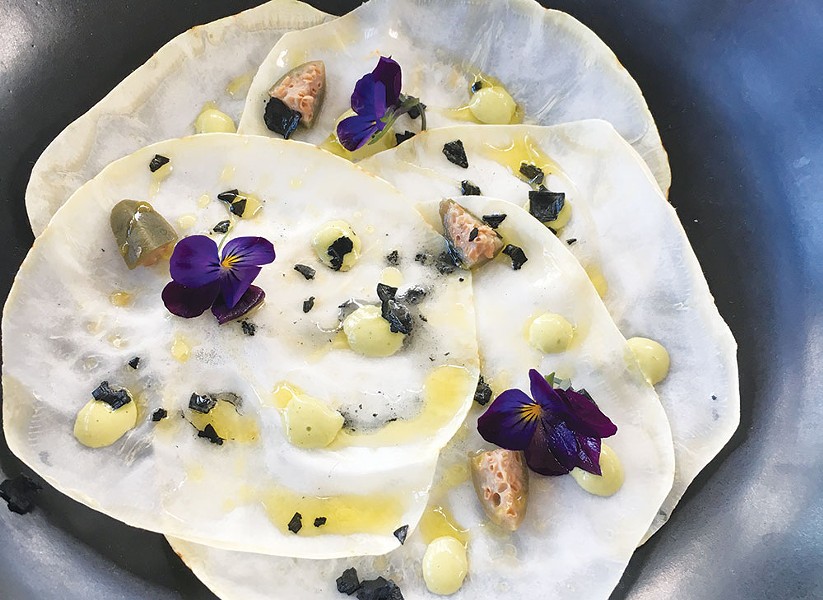 The meals are largely sourced from culinary gardens just below the dining room, a modern, glass-walled building with sweeping views of the 300 acres of vines and points west.

Unlike many wineries that limit dining to wine club members, Chalk Hill Estate is open to the public. The 90-minute lunch goes for $120. For club members it's $96. The experience, which includes a brief tour, is available by reservation, Tue-Sat at 11am.

The man behind Chalk Hill Estate is the late Fred Furth, an aviator and litigation lawyer who used his funding from a few big litigation wins to purchase his first three acres of land here in the 1960s. He planted some vines and by 1974 had produced a small lot of Chardonnay. Eventually, he purchased all 1,300 acres. In 2010, Bill Foley acquired the property as part of his ever-growing wine empire. Foley lives on the property half the year and produces 26,000 cases of Sauvignon Blanc and 12,000 cases of Chardonnay.

In spite of a large, domed horse pavillon, horses on property are a thing of the past, and the stables have been renamed as "VegStables." Three culinary gardens on the property grow 80 percent of the daily culinary tasting menu. Produce is harvested early each morning for the kitchen.

Chalk Hill's executive chef is Dave Thater. Lunch began with a tiny cup of delicious chilled leek soup served with bits of crunchy pancetta on top. The 2017 Felta Chardonnay pulled out the citrus notes of the Meyer lemon oil drizzled over the next dish: earthy, paper-thin slices of celery root carpaccio. Each slice varied the strength of the lemon that changed the acidity of each sip of wine. A garlic-cilantro emulsion and edible pansies added to the complexity of the dish.

The next course of roasted acorn squash topped with mint pistou of macadamia nuts was the size of a deck of playing cards. Underneath the block of squash was a bed of black lentils and wispy sheets of sliced carrots. Ricotta salata, pressed and aged one week, was strewn over the dish like confetti.

The 2015 Pinot Noir provided the perfect tannin structure for this pairing and was the only wine served that wasn't grown on the Chalk Hill Estate vineyards. It's a bit too warm for Pinot Noir here so the grapes come from the Russian River Valley.

Course three was a miso-braised octopus with pickled shiitake mushrooms and a briny vegetable broth served in a fire engine red Le Creuset crock. The earthiness of a 2014 Syrah served with it was a great pairing for this hearty dish.

The New York strip loin topped with a Petit Verdot saba (wine must reduction) and a dusting Bodega Bay sea salt ended the meal on a strong note, made even better with a glass of the 2014 Clara's Blend (namesake of Furth's granddaughter), a blend of Cabernet Sauvignon and a bit of Malbec and Petit Verdot.