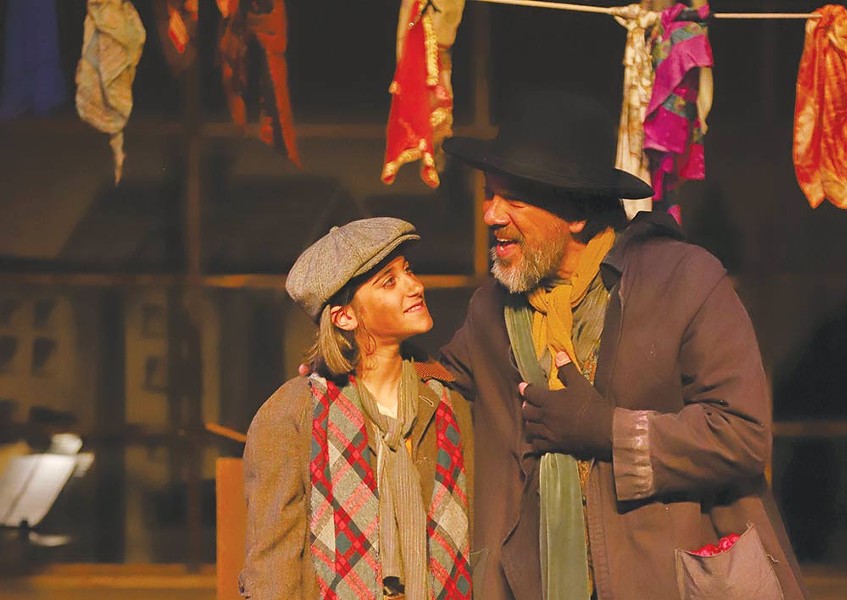 North Bay theater patrons are well aware of the numerous performances cancelled because of the Kincade Fire and PG&E power shutoffs. What they may not know is the impact those factors had on shows in the middle of their rehearsals.

There's no doubt that loss of critical time can be attributed to some—but not all—of the raggedness evident in the 6th Street Playhouse production of Oliver!, running through Dec. 15. Odd directorial choices and horrible sound mixing also contributed to a less-than-satisfactory opening night performance of this classic musical.

Charles Dickens' Oliver Twist is a dark look at the underbelly of a 19th century England full of orphanages, workhouses and crime. British writer/composer Lionel Bart managed to turn it into a somewhat family-friendly musical with a very successful West End debut and Tony-winning Broadway run, followed by a multi-Oscar-winning film adaptation.

Orphan-boy Oliver (an under-rehearsed Cecilia Brenner) is living the hard-knock life when he's sold to a local undertaker. He runs away to London and falls in with a young pickpocket known as the Artful Dodger (a personable Mario Herrera). The Dodger introduces him to Fagin (David Yen, strong), the "mentor" to a gang of youthful thieves with a beerhall lass named Nancy (Brittany Law, excellent) as a mother figure. Circumstances soon find Oliver in a good home, but Nancy's mate Bill Sikes (a sinister Zachary Hasbany) sees Oliver as a threat. A violent end is in store for someone.

The show requires a large cast and while director Patrick Nims has 24 performers on stage, more than half of them are kids. Consequently, the adult actors essay multiple roles (Dwayne Stincelli is the undertaker and a curly-locked housemaid; Maureen O'Neill is the undertaker's wife and a ridiculously mutton-chopped Mr. Bedwin, etc.) as well as inanimate objects like doors and window blinds, while the kids play street urchins, the occasional adult and animals. This gave the show a strange tone and led to the evening's oddest moment when the violent bludgeoning death of a character was immediately followed by the sound of the audience's "Aw!" at the sight of a child portraying a dog.

Conceptual issues aside, poor sound work off stage repeatedly undermined quality performances on stage. I'm starting to sound like a broken record here, but sound really matters in a musical.

At some point, could someone step forward and say, "Please sir, I want some more ... rehearsal"?