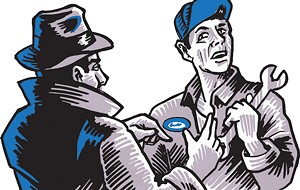 Jake had a frown to match the Roadmaster's grille when he rolled into Petaluma, only not so shiny. He lost sight of the girls' bus after they pulled into town. After cursing himself, he found a phone booth to check in with Pemberton, hoping for another lead but not wanting to tell him Molly had given him the slip.

Since the surf shack, Molly had been careful. Paying cash, leaving no trail. Until she used daddy's plastic at Empire Automotive. The transaction had just popped up on Pemberton's account. Jake told him he was making progress and headed to the garage.

"Sweet ride." A mechanic ambled out of the garage, wiping a greasy wrench with a rag. "What's the horsepower, 144?"

"One sixty-five," Jake said. "Nineteen forty-two. Last one off the line."

"She's fine. It's a couple of broads in a yellow krautwagon I'm worried about. Do you know when they're coming back?"

The mechanic paused and smiled—like an ant just bit his nose. "Oh, you know those nice young ladies in that Vee Dub? Sorry, sir, but I really can't—"

"Listen here, mac. Reynolds Pemberton is the guy I'm working for and the guy that's paying your bill, too. So give me the skinny, beanstalk, if you don't want trouble."

The mechanic folded like an old metal chair and told Jake that the girls were headed up to Santa Rosa, and that they then planned to get some kind of cedar enzyme spa treatment. Whatever that was, Jake thought.

It was getting late, so Jake looked for the hotel with the best neon sign and checked in at the Flamingo. My kind of place, he thought.

As he walked up, a silver Tesla zipped in and parked right in front of the door. The license plate read, "TECBUKS." . . .