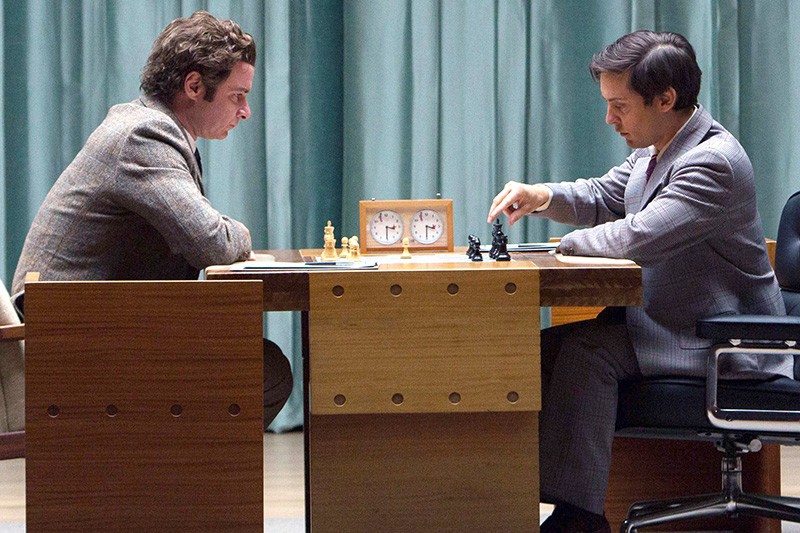 Pawn Sacrifice is a monomaniacal character study of 1970s chess master Bobby Fischer, who was always very close to madness. Tobey Maguire, as Fischer, plays a man besieged by the world. The film seems to think that blunt competitiveness will make us identify with a climber; after all, movies can make us identify with anyone, as long as he's playing offense. But Fischer is a genuinely offensive guy: paranoid, mercenary, anti-Semitic, insufferably arrogant, and he doesn't seem very interested in women.

Director Edward Zwick (Glory, The Last Samurai) takes it on faith that Fischer must win for the good of the nation and to take the Soviet Union down a peg: "We've lost China, we're losing Vietnam," points out Fischer's government handler (Michael Stuhlbarg). Even hippies get their patriotism on when they see Fischer's game: "Maybe the U.S.A. isn't so bad after all!" exclaims an extra.

It's tough to judge what's more clumsy, the five-ton needle drops—really, the Doobie Brothers? "White Rabbit" again?—or the appeals to the flag via newsreel montages of the Soviet Union at its most blustering. Zwick's scenes are flat except for some Icelandic landscapes that no doubt paid for themselves in tax credits. Maguire, in endless close-up, seethes as his Russian nemesis, Boris Spassky (Liev Schreiber), flashes a wafer-thin, sardonic smile.

Schreiber eroded my patriotism. He keeps taking the movie into an interesting new direction that Zwick won't follow. When Fischer's nerves snap, Spassky murmurs, "You don't look well, Robert James." It would have been easy to make Pawn Sacrifice work better: give us more Spassky, show his share of hard times, which would have created some communion between the opponents. But as it stands, the film simply encourages us to see Fischer as a Cold War casualty who cracked up to keep us free.