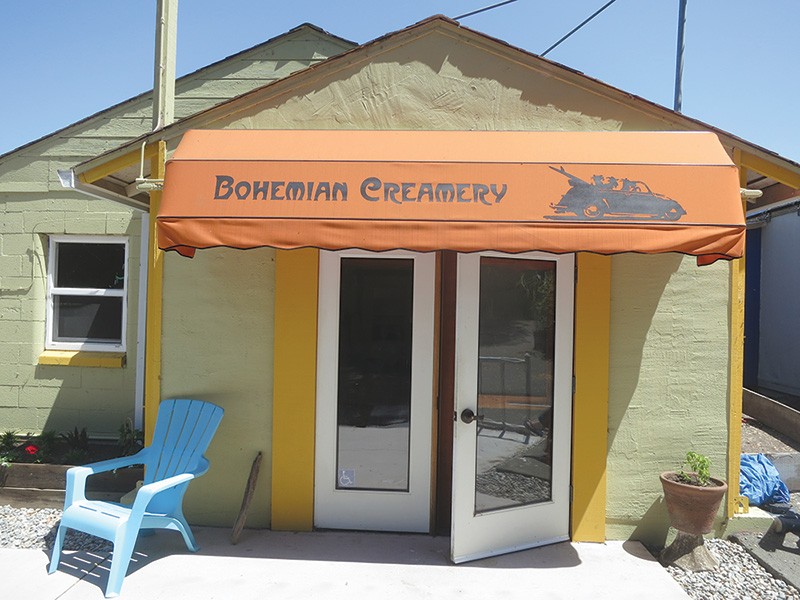 The North Bay has an embarrassment of riches when it comes to local cheese. All that cow, goat, sheep and even water buffalo milk is great for cheese lovers, but it can be hard for cheese makers to stand out in an increasingly crowded field.

Lisa Gottreich, owner of Bohemian Creamery, doesn't have that problem. Not only does her business have a cool name (ahem), she makes some of the most distinctive cheese in the North Bay. And now its available right where it's made.

Bohemian Creamery cheeses are served at top-drawer restaurants like the French Laundry, Chez Panisse and Dry Creek Kitchen. The Obamas seek them out when they dine at Cotogna. That means you have to spend some serious money to try them. Gottreich had long wanted a retail outlet, but farmers markets took too much time and made her too little money, and grocery stores marked up her cheeses too much. So four weeks ago she opened her own shop. And what a shop it is.

The little market was once Gottreich's office, but it's been dolled up with bright paint, a cool bench atop two milk pails, framed photos of goats and a beautiful display case of her many splendid cheeses. Directly behind the market is the creamery where Gottreich turns milk into cheese, and behind that is a stunning, hilltop view of the Laguna de Santa Rosa and Mount St. Helena. Below is the pasture where Gottreich raises her hundred or so Alpine goats. It doesn't get more farm-to-market than that. She plans to offer patio seating where you can nibble on cheese and take in the view.

Gottreich, who lived for years in Italy and was raised by European parents, calls her cheese shop a "latteria," or dairy bar, because it will offer more than cheese. "I want to introduce people to other things that can be made with milk," Gottreich says.

How about soft serve goat milk frozen yogurt? On my visit she had a refreshing, delicious and not too sweet, ginger-agave flavor. She's also perfecting a recipe for whey sodas, a lightly carbonated and flavored beverage made from what's left over when the solids (curds) are separated from the milk. Soon there will be espresso drinks made with fresh, mascarpone-like ricotta and cow's milk cheese filled with cajete (goat milk caramel) called Cowabunga.

Most artisanal cheese makers in the North Bay specialize in cheese from one kind of milk. Gottreich makes cheese from every kind available—cow, goat, sheep and buffalo. In addition to Cowabunga, the creamery's non-traditional cheeses include a semi-soft, water buffalo cheese, called PocoLoco, infused with bits of Italian Lavazza coffee. It's crazy good. There's an intriguing organic cow's milk cheese made with local dulse seaweed called Surf and Turf.

Gottreich also makes several traditional cheess. One of my favorites is the Caproncino, a semi-hard goat cheese aged up to eight months.

The cheeses are great, but traveling to the shop with its views of goats, mountains and verdant plains makes it really special. Get there before Sunset magazine writes it up and the crowds come.