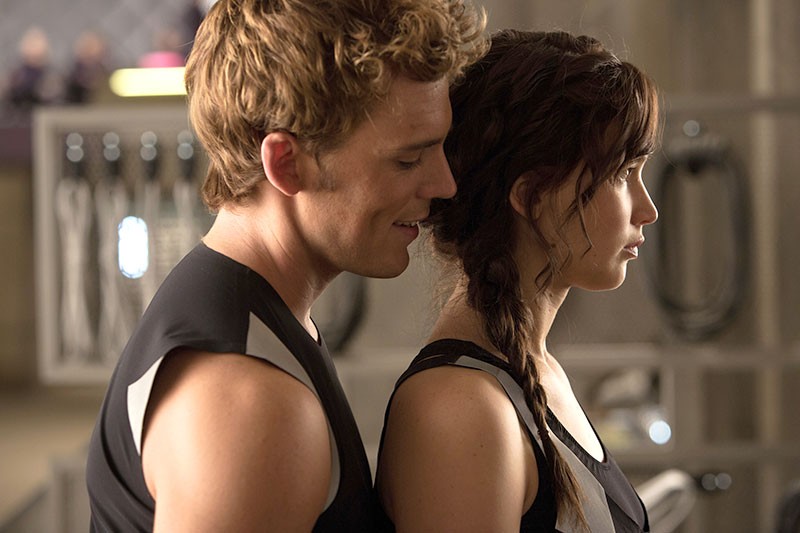 The rushed, jostling sequel Hunger Games: Catching Fire has a severe case of middle-child syndrome; it's only there as a conduit to the invention of the two-part sequel.

In the film, the military-industrial-entertainment complex of futuristic Panem celebrates the 75th anniversary of the Hunger Games by staging a pit-match with more than a dozen badly introduced previous winners. The traumatized Katniss Everdeen (Jennifer Lawrence, still solid and enigmatic, an action heroine to reckon with) must fight alongside the boy whose life she saved in the last film. He's Peeta, played by the inert Josh Hutcherson. The government is propagandizing a trumped-up romance between Katniss and Peeta, while the Girl on Fire's old flame, Gale (Liam Hemsworth), languishes in coal country. But "Bow" comes before "boyfriend" in Katniss' dictionary. The most dangerous game commences in a tropical thunderdome, beset by mustard gas, annoying birds and purple-assed baboons.

As in the Harry Potter films, it's the character actors that wake this movie up. Stanley Tucci corners the market on humor here as the smarmy TV host Caesar, with his cotton-candy purple mullet. Playing the new torture-master, Philip Seymour Hoffman has a tunnel-visioned viciousness, as does Johanna (Jena Malone), the Faith to Katniss' Buffy.

We don't get a better idea of how Panem exists here, except as twittery partygoers and proles standing around giving the Boy Scout salute. Donald Sutherland, as the aging President Rose, glowers, sneers and personally delivers information that a smarter dictator would keep to himself. We know Rose is declining, but it's strange how Panem doesn't have the interesting power struggles that commence when an elderly totalitarian leader has no clear successor.

Director Francis Lawrence, of I Am Legend, softens the distressing kid-killing violence, but he composes as if for the cellphone screen, a matter visible even in IMAX. The Zardozian outfits suggest that the costumers and the makeup people get to have the most fun in this, a solemn sci-fi parody of our own gargantuan American excesses.