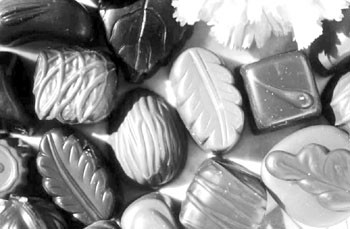 Are American candy companies sweetening their profits with child slavery?

It was hot for February. The sun was beating down on the sidewalk in front of the See's candy store where I was about to pick up a pound of assorted truffles as a Valentine's Day treat for my wife and kids. My mouth was already watering in anticipation of the Mom's Apple Pie truffle I was planning to throw in as a little present to myself. Out on the sidewalk, just to the right of the store entrance, a threesome of smiling young people stood by the door, holding cameras and a big basket full of little paper hearts. As I approached, one of them said, "Happy Valentine's Day," and handed me a piece of paper. Assuming they were employees of See's, I accepted the paper, expecting it to be a discount coupon or perhaps a list of Valentine's Day specials.

Instead it turned out to be a protest flyer, emblazoned with the headline, "See's Candies: Slavery and Exploitation Break Our Hearts!" Under that were the words, "We want Fair Trade not child slavery and poverty wages!" There was a photo of three emaciated boys sitting beside a pile of cocoa pods, staring blankly at their hands. Happy Valentine's Day indeed.

This was no promotional campaign for See's. The polite-as-punch trio was, in fact, standing out in the heat on behalf of Global Exchange, the remarkably well-organized political action alliance that puts pressure on companies engaging in questionable trading practices in regards to human rights and fair wages.

The flyer announced that 43 percent of the world's cocoa comes from plantations on the Ivory Coast, a part of the planet where child slavery is very much in practice. In response to massive national poverty caused in part by the bottoming out of cocoa prices, parents there are taking cash in exchange for sending their children to work the plantations. In other cocoa-producing regions, those workers actually paid to harvest the cocoa earn such low wages their families are "on the brink of debt and starvation," according to the flyer. Workers who try to escape are severely beaten, as are any who fall under the weight of the cocoa bags they're forced to carry.

As for Global Exchange and today's sidewalk campaign, the plan was to collect as many signed paper valentines as possible, each bearing a note asking See's to support a chocolate industry agreement to end child slavery by 2005, and send them off to Charles N. Huggins, president of See's Candies, Inc. I signed one of the hearts, spelling out my name and address to show I was a real person with legitimate concerns.

That accomplished, I went in and bought a dozen chocolates. (In my defense, I did forgo buying the Apple Pie truffle for myself. Take that, you oppressors of children!) I kept the flyer and, once Valentine's Day was over and my kids' sugar highs had subsided, I did a bit of research on the subject of child slavery in the chocolate industry.

Global cocoa prices have taken a serious tumble over the last ten years, with bulk cocoa currently trading at 40 to 50 cents a pound. With West and Central Africa already experiencing devastating levels of poverty, the lost profits in the local cocoa industry have pushed the population into a desperate crisis. According to a report published by CNN in April 2001, the rise in child-slave trafficking has a direct link to the levels of poverty in West and Central Africa. Facing starvation, many parents are handing their children over to traffickers, sometimes under the mistaken belief that they'll be given an education and a better life, though frequently families are actually paid for their children, receiving between $1.50 and $14 per child.

UNICEF reports that over 200,000 children are traded each year. Most of the girls end up in the domestic or sex trades, while the boys get used as manual labor in a variety of trades such as coffee and cocoa.

Two weeks after Valentine's Day, I received a letter from Charles N. Huggins himself.

"I am in receipt of your note regarding child slave labor in the farming of cocoa beans," the letter began. "We do care deeply about the matter of child slavery in the Ivory Coast, which came to our attention several months ago." According to Huggins, See's has signed the Chocolate Manufacturer's Association protocol to end child slavery and has been actively supporting efforts by the CMA, the World Cocoa Foundation, and the American Cocoa Research Institute to "strongly condemn" child-slavery practices and to cooperate with the antislavery efforts of the U.S. Department of Labor and the governments of cocoa-producing countries. "It is my belief," the letter concludes, "that public response from concerned citizens such as yourself, along with the economic assistance of groups such as [the aforementioned organizations], will help to ensure that such practices are eliminated.

"Thank you for writing to me and for thinking of See's."

Though Mr. Huggins seems to be stating that See's has done everything it can to stop the use of child labor on cocoa plantations--they've signed a petition, which, to be truthful, is pretty much all I've done--there are those who have another idea for See's and every other major American chocolate company: Pay more money for the chocolate.

"We believe the $13 billion chocolate industry owes it to the cocoa farmers around the world to be paid fairly," says Deborah James of Global Exchange, "and particularly to the West African farmers--some of which are, unfortunately, under conditions of actual child slavery--to be paid fairly. And obviously, not to be enslaved."

Global Exchange is encouraging American candy companies to adopt Fair Trade Certification, essentially an agreement to pay cocoa farmers a guaranteed minimum price of $80 dollars per pound, which would, in theory, allow cocoa plantations to pay their workers a living wage. It would also boost the economy so that families would no longer be forced to sell their children.

"To accomplish this," says James, "we need an international monitoring system that's Fair Trade, to guarantee that farmers, organized into co-ops around the world, are paid a minimum price per pound."

As for the rest of us, we can write more letters. We can even--I hate to say it--make it clear that we might buy less chocolate until something is done. As for me, if things haven't improved by next Valentine's Day, then, like it or not, my wife and kids are all getting flowers.