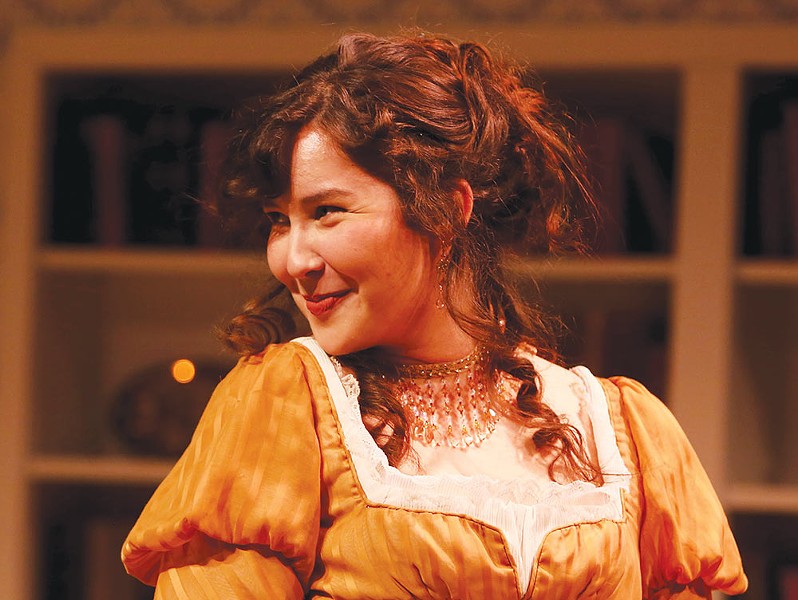 Miss Bennet: Christmas at Pemberley, Lauren Gunderson and Margot Melcon's "continuation" of Jane Austen's Pride and Prejudice, made quite a splash at the Marin Theatre Company in 2016 and since then has become a staple of holiday theater programs. The Spreckels Theatre Company brings it to Rohnert Park with a production running through Dec. 15.

It's Christmas time at Pemberley Manor, where Fitzwilliam and Elizabeth Darcy (Matt Cadigan & Ilana Niernberger) are hosting a reunion of the Bennet sisters—Elizabeth's sister Jane (Allie Nordby) and her husband Charles (Evan Held), precocious sister Lydia (Ella Park) and their somewhat neglected sibling Mary (Karina Pugh). Mary sees little future for herself but the caretaking of her aging parents. Her chances of finding love are as limited as her chances of exploring the world outside of books.

Enter Arthur de Bourgh (Zane Walters), a somewhat nebbish neighbor who has come into his own estate. His interests align with Mary's and there's definite interest in Mary, but Arthur's experience with women is severely limited.

Heeding the advice of the gentlemen of the house, Arthur writes a letter expressing his feelings, which, of course, gets in the hands of the wrong person. As that misunderstanding plays out, in swoops Anne de Bourgh (Taylor Diffenderfer), Arthur's cousin and self-declared fiancé. Will everything work out for Mary and Arthur or are they doomed to lives of spinsterhood and loveless marriage?

C'mon, it's a Christmas play.

And a charming one at that. Director Sheri Lee Miller brings the right touch and the perfect cast to the material. The writing is so good and the characters so clearly defined that you really don't need to know a thing about Pride and Prejudice to "get it." Everything you need to know comes from the characters, and the cast surely "gets it" with each member delivering a strong and delightful characterization via Gunderson and Melcon's witty dialogue.

The characters and their relationships are the root of the show's humor. Pugh's Mary is a tower of strength and vulnerability who meets her match in Walters' spot-on bumbling and loveable Arthur. Niernberger, Nordby and Park's sisters all seem like sisters and Cadigan and Held's gentlemen lovingly exist in their world. Diffenderfer's Anne is a great villain whose need for security leads her to say and do some awful, terrible and very amusing things.

Love conquers all and it will conquer you should you spend some time at Pemberley Manor.