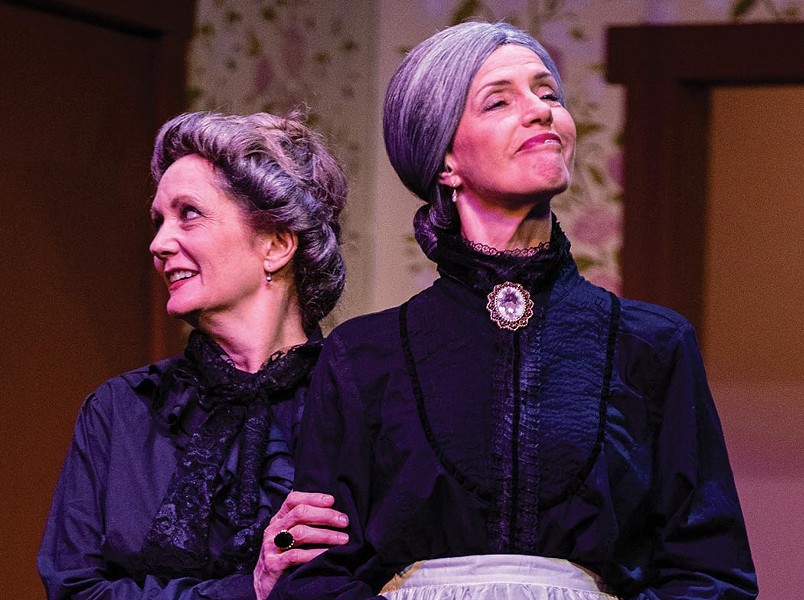 Many people, including Steven King, consider Shirley Jackson's 1958 novel The Haunting of Hill House one of the finest horror novels ever written. Adapted for film twice (and currently a Netflix series), F. Andrew Leslie adapted it for the stage in 1964.

Curtain Call's previous genre production (Dracula) suffered from a leaden script. This time, uneven performances are problematic. Casting often poses a challenge for smaller community theaters, and this West County troupe is no exception. Where they excel is with scenic design. They somehow manage to fit really interesting sets onto their tiny hall stage and also provide effective technical elements. Here, they successfully create an atmosphere of fear and suspense through lighting, sound and special effects.

It's an earnest production—good for at least a shiver or two.

Joseph Kesselring's tale of the Brewster sisters and their proclivity for poisoning lonely, old gentlemen has pleased audiences for over 75 years. The popular 1944 film-adaptation, directed by Frank Capra and starring Cary Grant as nephew Mortimer Brewster, contains what most film aficionados (and Grant himself) consider the debonair star's worst performance.

Unfortunately, Michael Hunter appears to base his interpretation of the role on that performance. The eye-popping, face-mugging approach to the character didn't work on film, and it doesn't work on stage.

Other performances in this Joe Gellura-directed production do work; including Rebecca Allington and Priscilla Locke as Abby and Martha Brewster; Sophia Ferar as Mortimer's girlfriend/fiancé; and Eric Yanez as a play-writing cop on the beat. Steve Cannon is actually a touch Karloff-ian as murderous brother Jonathan Brewster (Boris Karloff originated the role) and the reliable Robert Bauer is amusing as Jonathan's sidekick Dr. Einstein. Michael Romero is a bit young as Teddy, but his appearances bring much-needed energy to the proceedings.

With dated references and its raison d'être (Karloff) long gone, Arsenic is starting to feel old.