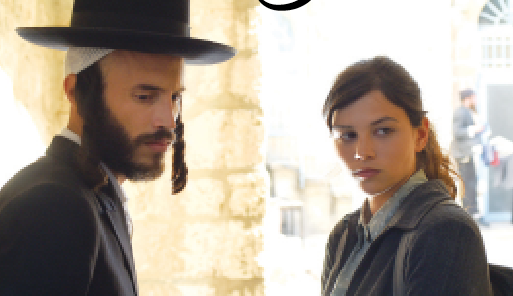 Back for its fifth year, the annual Sonoma County Israeli Film Festival runs March 3–31 at the Rialto Cinemas in Sebastopol. Featuring four films, this year's fest focuses on a bevy of themes including gender identity, love and aging as well as the ongoing Israeli–Palestinian conflict.

"We have a very robust film program at the Jewish Community Center of Sonoma County, but we found that there were so many submissions of Israeli films over the years, we wanted to give them a chance to shine and have their own festival," Hodes says. "So now we have the Jewish Film Festival in October and the Israeli Film Festival each spring."

Hodes goes on to explain that many people, particularly in this area, don't really grasp the depth of the Israeli film industry as a whole.

"People may have preconceived notions of say, Israel as a country but aside from that, there's a high-quality film industry in general with hundreds of films every year, wonderful film schools, a lot of student films," she says. "And just like any country with so many films, a lot of these won't be screened internationally."

Still in its formative years, the Israeli Film Festival features four films spread out over the month of March showing twice daily on Tuesdays. It kicked off last Tuesday, March 3, with the Bay Area premiere of Flawless, written and directed by Tal Granit and Sharon Maymon. The film won four Ophir Awards (the equivalent of the Israeli Oscars).

"The Jewish Community Center wants to give those films a place to be shown," she says. "The curatorial work that I do is to try and create a balanced selection. So, they are not all political, they are not all religious or documentary, they're not all, say, Holocaust specific or Palestinian/Israeli crisis specific. I try to create a very balanced selection in terms of comedy, drama, documentaries and try to show a balanced view of what's happening in that country."

Sameh Zoabi's romantic-comedy Tel Aviv on Fire screens twice on Tuesday, March 17, with a 1pm matinee and a 7pm showing. The film had a very successful film-festival run and won numerous awards including an Ophir Award for Best Screenplay and the Best Picture Interfilm Award, both at the 2018 Venice Film Festival. Lead actor Kais Nashif also won the Venice Horizon's Award for Best Actor.

The film is a satire of the Israel/Palestine conflict wherein a young Palestinian man is given the opportunity to serve as an assistant on a popular soap opera, yet this work requires him to travel between the Israeli and Palestinian border. Sure enough, on his way to work an Israeli border patrol stops him, and confusion and hilarity ensue before the two find common ground.

When discussing the program at large, Hodes seems most excited about Tel Aviv on Fire as she describes the way it takes on a serious topic yet is still very much a comedy. Hodes says the film "really hits so many key topics and does it skillfully in a way we can laugh at at the same time."

Hodes goes on to note the film is a bit tricky on a few levels, language-wise ("pay attention to which character speaks which language" she states more than once) and she will be on hand to provide an intro to the film. To clarify a bit more without providing spoilers, Hodes concedes Tel Aviv on Fire is "all in a foreign language but it's 70 percent in Arabic and only 30 percent in Hebrew so, this is very much a Palestinian-based film."

Hodes also points out that Tel Aviv on Fire shows deep, honest perspectives from people trying to travel between borders. She says viewers will "see the border wall, they will see the travel between Jerusalem and Ramallah, back and forth and back and forth and what that really means in terms of the reality of what crossing the border wall is like."

The following week, Tuesday, March 24, also with 1pm and 7pm showings, is The Other Story. This film is directed by Avi Nesher, who also shares co-writing credits with Noam Shpancer. Nesher has made films in Israel since the early '80s and is widely credited as playing a major role in Israel's prominent rise in International Cinema over the past decade.

Hodes says Nesher is "sort of the Steven Spielberg of Israel" which, seeing as he's relatively unknown stateside, speaks clearly to Hodes' aforementioned goal of bringing excellent yet perhaps not well-known Israeli cinema to Sonoma County.

Based on true events, The Other Story deals with secular Israelis, orthodox Jews and progressive pagans—all wrapped up in a coming-of-age story. The film centers on a rebellious young woman who escapes the chaos of her secular upbringing, hoping to find comfort in the more disciplined Hassidic life. Themes of female empowerment are found throughout the film, and Los Angeles Times critic Kenneth Turan says the film is "filled to the brim with intense emotions and proud of it" before going on to echo Hodes' sentiment about the struggle for smaller foreign films to be seen on American screens. To this point, Turan says the film's ability to cross borders and sell tickets in America makes The Other Story an "outlier among foreign-language films."

Rounding out the Israeli Film Festival is rom-com Love in Suspenders, directed by Yohanan Weller and written by Elisa Dor. The film, which plays at 1pm and 7pm on Tuesday, March 31, is a play on the classic "opposites attract" paradigm, yet this film focuses on two senior citizens who are both grieving the recent loss of their significant other while navigating new relationships.

Hodes calls Love in Suspenders "an incredibly lovely comedy" that she is "happy to end [the festival with] on such a light note." Hodes says that the festival has a sizable older audience and thinks the film will resonate because it "focuses on age and the right to be loved no matter how old you are and what that means in terms of getting older and having a quality of life that you deserve."

In terms of the films lined up for this year's Israeli Film Festival, which is also Hodes' maiden voyage as programmer, she says it's "very much along the lines of what we've done but focuses on more modern themes. We have transgender issues, LGBTQ, we have the Israeli-Palestinian conflict issue. Last year, they did sort of the Israeli experience of international culture."

Asked what makes this year unique, Hodes says, "In my heart of hearts, I would like to see the Israeli film-festival audience-base expand to outside of the Jewish community which, I think it already has in that we have a lot more interest every time we have a festival."