'Of My Native Land.' 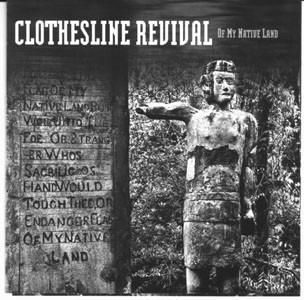 Every now and then, some fragment of what critic Greil Marcus called "the old, weird America" will turn up like an Indian arrowhead unearthed by a plow; a listener, passing by a low-frequency FM radio station or an open window, will overhear a few bars of some early recordings and be transported to that other place.

Santa Rosa's Conrad Praetzel and his collaborator Robert Powell created Clothesline Revival to try to put some of these old songs and singers in a new musical frame. Over the phone, Praetzel--who provides beats, atmospherics, bass, guitar, dobro, and mandolin on the group's first album, Of My Native Land--notes the influence of David Byrne and Brian Eno, who made a suite of re-recordings of ethnographic talk and song titled My Life in the Bush of Ghosts. The idea for Clothesline Revival may have been anticipated by Brian Eno, but Of My Native Land has its own sound.

"I've always been into traditional folk," says Praetzel, who works days as a beta tester with the Scotts Valley sound-system company EMU. "I drifted into working with electronics and sound design. Eventually, I found a way to go back to my roots." Clothesline Revival records (and sometimes re-records) old folk and country songs along with new vocals.

The band includes San Francisco singer Tom Armstrong, and vocalist Wendy Allen of the band the Court and Spark sings on four trad ballads. The standout of those four songs is her eerie, soaring new take on "Gypsy Laddie." There must be a thousand different version of the song about the working-class loverboy who runs off with a rich girl. Clothesline Revival's version is overlaid with muted popping of electronic drums and remote electronic sighs. Sukhawat Ali Khan ululates in the background.

In fact, tomorrow never did come for her. Praetzel explains: "The song note from the CD A Treasury of Library of Congress Field Recordings describes how Ora died at an early age, 'a youngster who would not live to her 21st birthday. Instead she would die of a gunshot wound inflicted during a holdup she perpetrated.'"

"The Time Has Come" is a redo of reclusive English folk singer Anne Briggs singing a cappella--to which Praetzel and Powell added clicks, the rumble of cicadas, and dobro. The most accessible track--the one that ought to be a hit--is "Calling Trains." In the mix is a minor-key progression by Robert Powell on pedal steel and a chatter of harmonica by Bruce "Creeper" Kurnow. An unidentified hollerer shows how he used to call out the all-aboard for the Illinois Central "Panama Limited" train. This unknown man is from another Lomax recording, and his story is also sad: He wasn't a conductor, but a prisoner at the state penitentiary at Parchman, Miss.

Praetzel was once an archaeologist who camped out at digs in Nevada and scratched for history under the Cypress Freeway interchange in Oakland. Finding these musical bits and creating a new musical context isn't quite the same kind of digging, but Clothesline Revival's method of ornamenting songs has lead to critical success and a review on NPR. One critic did complain that the counterpointed rhythm Clothesline Revival laid on Ledbelly's 1944 song "Cow Cow Yicky Yicky Yea" was the equivalent of painting a mustache on the Mona Lisa.

Still, as the album's cover shows--a photograph of an unknown sculptor's warning in stone against any "sacrilegious hand" that would "endanger [the] flag of my native land"--the Clothesline Revival more often treats these old songs with care, remaking them while giving them all due love and honor.