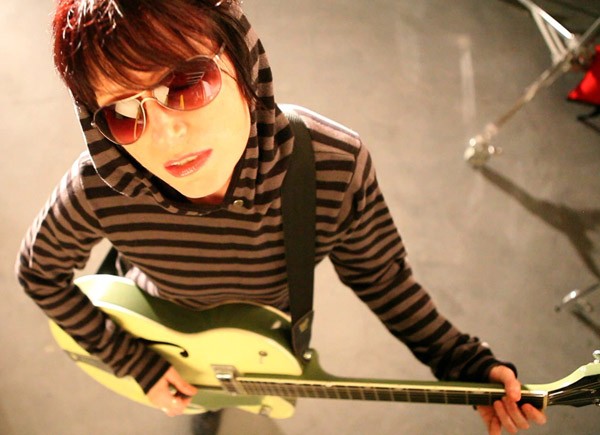 They're ubiquitous, to say the least. You go to a show, ready to hear songs played live, hopefully in a way that adds striking new elements to recordings that you've been listening to at home for months. And then there it is, the laptop, glowing down from the stage and all loaded up with prerecorded tracks, narrowing the possibility of hearing something altogether spontaneous.

"Unless I'm listening to a DJ, I'm not sure how much I like it," says San Francisco–based musician Jane Woodman, who brings her solo show to the Arlene Francis Center on Jan. 27. "I don't really like seeing the Apple logo glowing onstage when I'm listening to music."

Not that Woodman is averse to using digital tools. Quite the opposite, actually. During her own live performances, she uses an iPhone to run prerecorded tracks into a mixer. The tracks act as a supplement to an analog-heavy setup using pedals and guitars.

"I'm all wired in," says Woodman on the phone.

It's all part of recreating a cerebral and ethereal sound, captured on Woodman's new EP, Poéme Èlectronique, that stimulates both aurally and visually; part shoe-gaze, part electro, the songs provide the perfect soundtrack for long car rides. So it's no wonder Woodman has started making her own video art pieces that are projected on the wall behind her, or directly on her body, during live shows.

"I've gone out with just a guitar before," says Woodman. "I did that for many years, and it was really fun, but I want more out of my performance."

Woodman's music career began as a guitarist and singer in Van Gogh's Daughter, a grunge-era rock band that found minor fame with the song "Through the Eyes of Julie." She's also collaborated with experimental cellist Zoe Keating.

Now Woodman is on to something entirely different. She makes what would technically be considered electronic music by building dramatic, reverb-drenched guitar and voice compositions, and creating layers of sound using loop stations, pedals and pads.

Recently, Woodman began teaching herself how to do animation, employing an eerie barrage of images—cloud-mired bridges, a lone gray wolf, icy oceans—in a video for "Vapour." The visuals add a brave new element to the live experience, she explains.

"I find it more exciting to have video going and have things to do up there," she says. "And I love the big sound."