Indigo Girls get political—sort of 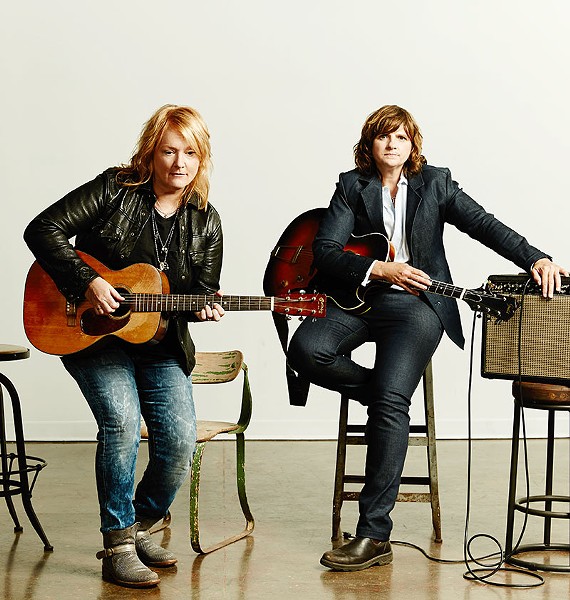 As friends and musical partners since the 1980s, folk-rock songwriters Amy Ray and Emily Saliers, one could argue, are no longer Indigo Girls; they are Indigo Women. Not that anyone should expect a name change anytime soon.

For in the last 30 years, few bands have remained as consistent as Indigo Girls, who have earned a legion of fans through critically acclaimed albums and heartfelt live performances. This month, they touch down in Santa Rosa for a spirited show at the Luther Burbank Center for the Arts on March 23.

"We're like family, really," says Amy Ray. After 30 years on the road, Indigo Girls continue to make it work by constantly trying new things. For example, the duo is recording a symphony in Boulder later this year, as well as performing with Joan Baez and Mary Chapin Carpenter on the Four Voices tour. "It's all about switching things up and not doing the same thing over and over again," Ray says.

In addition to hits like "Closer to Fine," Indigo Girls are also known for championing environmental and social causes, like climate change and the recent Standing Rock showdown in North Dakota.

"I feel like we had made a lot of progress environmentally, and it's being dismantled," Ray says. "But there's a chance for states like California to step in and refuse to sacrifice their environment and public health in the name of profits."

In the face of a seemingly hopeless administration, Ray knows that enough people have learned over the years that climate change is real and needs to be addressed. "That doesn't just go away," she says. "I've been inspired to see all the scientists and people take the situation into their own hands and saying, 'This stuff can happen inside DC, but it's not going to happen in my world.'"

Yet she also knows that the Republicans who have control—"the ones who are decent and practical and want to do the right thing," as she puts it—need to stand up. "It's not about party politics," she says. "We need every single person–Republican, Democrat, Green Party, Tea Party–to build bridges and have a real dialogue."

Even with their activist spirit, Ray points out that Indigo Girls are not overtly political, but rather tell stories of personal experiences and perspective. "I don't want to tell people how to think," she says. "A good story should be something people can find the meaning in."