Sonoma County is known for its posh wineries, natural beauty and upscale living. But in the midst of this affluence is Roseland, an urban, majority Latino unincorporated neighborhood just west of Santa Rosa. Socioeconomic indicators in the area lag far behind the rest of the county—and the country at large. In some parts of the neighborhood, the quality of life is lower than in Mississippi, the lowest ranked state in the country, according to data from the Social Science Research Council.

This spring, the Sonoma County Board of Supervisors received a 100-page report commissioned by the Sonoma County Department of Health Services titled A Portrait of Sonoma County that detailed this inequality. The report examined the health, access to education and living standards of different parts of the county. East Bennett Valley, for example, with a 90 percent white population, has a quality of life on par with the wealthiest in the nation. The area's median yearly income is $68,967.

In Roseland, median yearly income is $21,699, and nearly half of the adult population did not graduate from high school. A 2007 RAND study showed that 65 percent of the population of south Santa Rosa, including Roseland, is overweight or obese. These conditions can lead to a host of problems, including diabetes, hypertension, heart disease, stroke, sleep disorders, depression and death.

The good news is that there are efforts afoot to raise the standard of living in Roseland and break the cycle of poor health.

A visit to the Sarmiento family home, just south of Roseland Elementary School, used to include a soda. "Being a Latino family, you always want to offer someone a soft drink when they visit you," says 32-year-old Alejandra Sarmiento.

But then a doctor's test changed everything. Sarmiento's husband, Jose, 35, learned his cholesterol levels had reached a dangerous 260, leaving him at a high risk for heart disease. Sarmiento, who does all of the grocery shopping and cooking for her household, took a hard look at what her family of five consumed on a daily basis.

"I didn't want to get sick in the future," Sarmiento says. "I don't want to see my children get sick or have the same problems as their parents. I want to improve everything having to do with their health."

A founding member of the Roseland Roadrunners Parents Club, Sarmiento started taking regular weekend walks with her husband, who works long hours as a landscaper, and on weekdays with the rest of the Roadrunners. In March 2014, she started attending free nutrition classes, followed by a calorie-burning Zumba workout three days a week on the Roseland Elementary campus, where her two eldest children attend school.

Taught by Promotoras de Salud / Health Promotors, who are trained as advocates and instructors in their own community, Sarmiento received tips on how incorporate exercise into a busy day, the different ways to get protein without meat (chia seed pudding, for example), and how one can of cola contains almost 10 teaspoons of sugar and how a bag of Takis contains enough sodium and fat to last all week.

"You won't find a soda in my house now, even as a remedy," Sarmiento says with a laugh.

Jose's cholesterol level has dropped to 200, significantly lessening his chances of heart disease or stroke. Sarmiento has lost 10 pounds, and says she feels happier and more connected because of the camaraderie found at the energetic Zumba class, which attracts dozens of mainly Latina moms. Plans are in the works to add yoga, Pilates and cooking classes later this year. 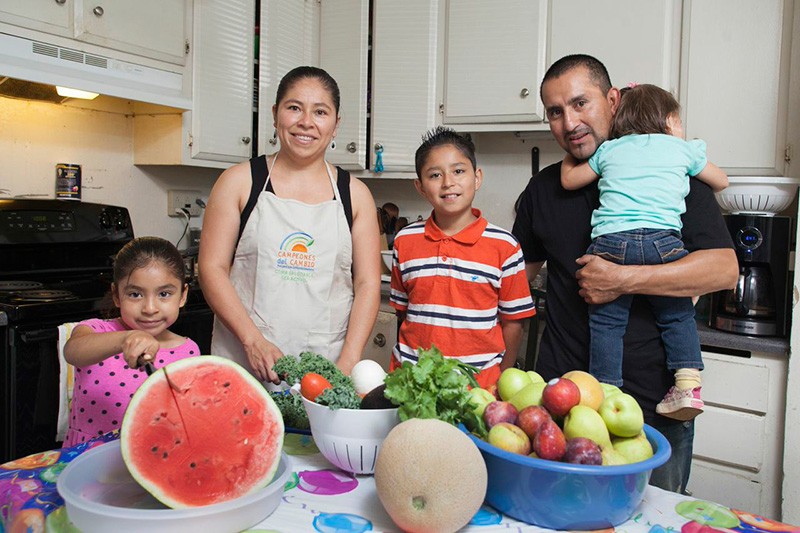 "Last year, during a community forum, parents expressed frustration at the difficulties of exercising and eating healthy in their neighborhoods," Lopez says. "They said they couldn't afford the gym and they wanted more accessible exercise classes and nutritional lessons."

They were able to get classes off the ground quickly; the scaffolding already existed due to the Healthy Eating, Active Living Community Health Initiative (HEAL), with which St. Joseph is a partner. A project of the Community Activity and Nutrition Coalition of Sonoma County and funded by Kaiser Permanente, HEAL began in 2006 and runs through late 2014.The idea is to build a "sphere of influence" in Roseland, creating a "HEAL zone" where community members of all ages and economic backgrounds can access healthful foods and physical exercise with ease.

'Roseland School District is a hub for resource-needy people," says Jessica Peterson, a community grant coordinator at the district. Peterson works closely with staff and administration to create a "culture of wellness" for the district's 2,727 students.

Lack of transportation and financial resources bind many residents to their neighborhood, says Peterson. Some kids have never traveled to Howarth Park or Spring Lake, only a few miles away. Families are therefore dependent on the local schools, markets, streets and parks to provide exercise, education, nourishment and entertainment. But, as Portrait of Sonoma County points out, Roseland lacks open space and parks. In other words, the "built environment," as public health officials define it, has everything to do with the health of a community.

Peterson points to Bayer Farm, a six-acre community farm and neighborhood park just a block from Sheppard Elementary, as one of the great HEAL zone successes. Built in a collaboration between Landpaths and Santa Rosa Parks and Recreation Department, the farm offers gardening and cooking classes and the opportunity grow organic foods.

"We can make systemic changes in the neighborhood," says Peterson, emphasizing the long-term goals of HEAL.

In response, the school district contracted with Oakland-based Revolution Foods to be the new lunch provider. The school meal service provides lunches made from whole, non-GMO, organic and, when possible, local ingredients. Every meal comes with a fruit and a vegetable.

"It was a big change for our students," says Alicia Vega, the district's food manager. The first year, kids refused to eat the food. Most of the organic Granny Smith apples ended up in the trash.

But participation has improved dramatically since then, says Vega. The next step was getting kids to eat in the morning. Before the roll-out of what's called "universal breakfast," just 6 percent of the students were eating breakfast at school. Now, with milk, cereal, hard-boiled eggs and fruit brought to classrooms by "breakfast ambassadors," about 96 percent of kids are eating a nutritious breakfast district-wide, says Vega. Other changes include the "Yummy Curriculum" taught by nursing students from Sonoma State University.

A program called "Harvest of the Month" is one of the biggest hits. Once a month, each elementary classroom receives a delivery of fresh fruits or vegetables from local farms like Bloomfield Organics in Valley Ford and Stony Point Strawberries in Petaluma. The kit contains enough of that month's selection, of say, strawberries, kale, cabbage or multicolored carrots for 32 kids to taste. It's rounded out with farmer profiles, a nutritional and historical factsheet and a newsletter for the parents. Harvest literature and recipes are also posted in local markets, part of a HEAL zone's Healthy Food Outlet.

"The kids in Roseland have the greatest health risks by far having to do with where they live," says Heather Granahan, regional food systems manager for CAFF's North Coast office. "Schools have a huge role in establishing eating habits with kids. According to research scientists at Kaiser, it's key that kids have peer-support for eating healthier foods."

If student response to the kits is a clue, then the peer support is happening. 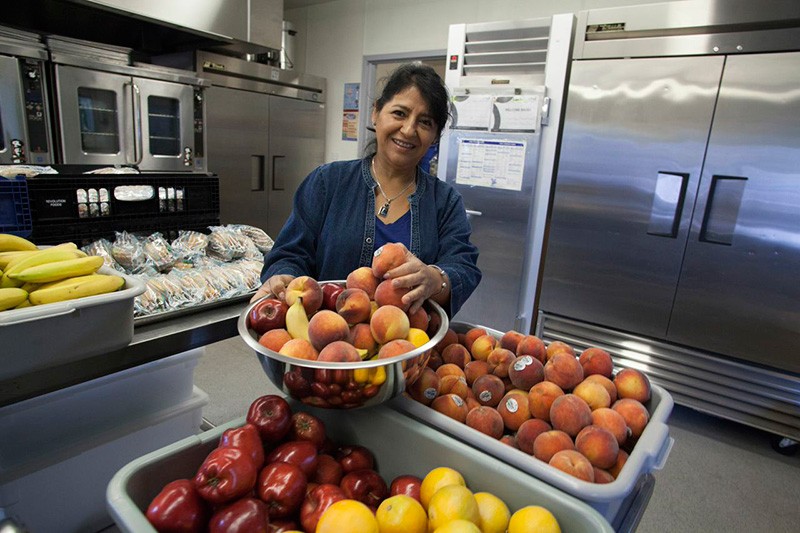 "We've had kids fighting over the leftover kale," says Granahan. "We've had reports from parents about students asking for better food at their house. We're trying to have a ripple effect here."

Physical activity on campuses has increased with "active recess," where a trained coach runs kids through fun, gender-neutral games like celebrity tag to get them moving. The Sonoma County Bicycle Coalition sponsors a walking school bus and family bicycle workshops. Plus, instructors like Garret Cuneo, who teaches fourth grade at Roseland Elementary, are doing their part. Cuneo's class does a 30-minute workout routine in the morning before class starts.

"There's a very tangible difference in their attitudes and performance after the workout," Cuneo says via email. "They're more alert and responsive."

The data isn't yet clear, but preliminary 2012–13 body-mass measurements at Roseland elementary show a decrease in obese and overweight students. But it's not possible to form absolute conclusions from the data yet because of differences in sample sizes and methodology.

What is clear is that kids like Jesus and Daisy Sarmiento are benefiting in two ways: they get good nutrition at school, along with chances for exercise; and at home, their mom Alejandra Sarmiento reinforces the knowledge by modeling healthy living herself.

Some parents have not gotten on board. Hortencia Garcia manages the kitchen at Roseland elementary. She says she still sometimes sees people buying lard-laden tamales for breakfast, for their kids and for themselves, from mobile food vendors parked just outside the school limits. A county ordinance passed in 2009 prohibits vending within 500 foot of any school property, but it's been difficult to enforce the rule. And the vendors keep coming.

But go to a Zumba class at Roseland elementary and you'll see the success stories. One woman's depression is gone. Another has lower insulin levels. And many of the women have dropped a few pounds.

You'll see that Alejandra Sarmiento has become a community leader. Recently, she was recruited for a five-day neighborhood leadership training class through St. Joseph's. Sarmiento got a crash course in social justice, community organizing and outreach. She learned about the relationship between governmental policy and the health of communities and strategic planning. She's excited to go to neighborhood stores as a Healthy Food Project representative, where, for a stipend, she'll promote marketing and product-placement.

Sarmiento says the training, the nutrition classes and, yes, even the Zumba sessions, have given her a voice.

"I didn't feel empowered before," she says. "I felt embarrassed and unsure of myself. But now I feel able to make change."

This article was produced as a project for The California Endowment Health Journalism Fellowships, a program of the USC Annenberg School for Communication and Journalism.