the reissue of the 'Company' cast album, which was first released in 1970.

Buy the libretto to 'Company.' 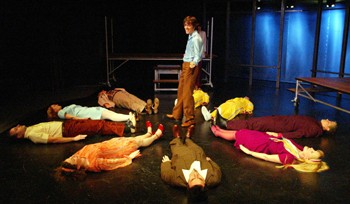 Love Is Everywhere: The cast of 'Company,' ably directed by Sheri Lee Miller and Argo Thompson, do the song-and-dance thing with style.

One is the loneliest number in 'Company'

Before Broadway played slumlord to a bunch of shivering addicts confronting death in an unheated apartment, it hosted Robert and his swinging stewardesses. Before an outraged transsexual named Hedwig rocked a restaurant full of Shriners, an actress named Elaine Stritch withered a whole town with a little ditty called "The Ladies Who Lunch."

Is it going too far to say that neither Rent nor Hedwig and the Angry Inch would exist without Company? Maybe. Cause and effect, chicken and egg, cart and horse--who can really say which goes where or what came first?

But we do know that when this Stephen Sondheim-Harold Prince collaboration opened on Broadway back in 1970, it meant revolution. With its nonlinear narrative and relatively provocative subject matter, Company--now onstage at Actors Theatre in Santa Rosa--blew a big, fat hole in the ironclad conventions of the Great White Way. Every weird, wonderful musical that followed owes a nod of thanks to this graceful pioneer.

The story itself is simple stuff. Robert (played here by Steven Abbott) is 35, handsome and heterosexual, sweet and successful. But he remains stubbornly single. After we meet his married friends, we start to understand why. "It's not so hard to be married," one female friend tells him. "I've done it three or four times." A husband has this to say: "I have everything but freedom, which is everything."

There's also a perfect couple who are getting a divorce and an engaged couple who are going insane contemplating actual marriage. Still, the single life ain't all gravy either, and Robert longs for a soul mate.

Sheri Lee Miller and Argo Thompson direct this AT production, which opened on the Luther Burbank Center's main stage. It must have been a challenge to retrofit the show for the rest of the run, which takes place in AT's smaller in-house theater. In one number, when most cast members are on their backs and kicking the air, the audience can't help worrying that someone might roll off the stage.

But on the whole, Company works surprisingly well in this intimate setting, thanks to adroit choreography by Miller and Kimberly Kalember. They deploy their cast atop and around a set of mobile mini platforms that put AT's minimal space to maximum use.

The performances range from good to remarkable. Abbott makes Robert both sympathetic and engagingly sly. The statuesque Jessica Powell, who plays the cynical JoAnne of "The Ladies Who Lunch" fame, is as eye-opening as a cold cup of coffee.

Some of the funniest scenes come courtesy of a couple played by the delightfully deadpan Denis O'Brien and the delightfully feral Dyan McBride, who give Robert a karate demonstration that goes terribly wrong. The cast sport a number of strong voices, including that of Sheila Groves, who put her singing talent to excellent use in "Another Hundred People."

Most costume designers presented with a '70s musical would take the same liberties as a hungry jackal stalking a wounded baby antelope. But AT's Mark Novac shows remarkable restraint: polyester claims its victims, but we see nothing truly painful.

Of course, the story's slightly maudlin exploration of the bittersweet nature of marriage may seem a little dated in the cold light of the 21st century. But no one comes to a musical for the theme. Song, dance, and maybe a little skin are the goals, and in these areas, Sondheim's lyrical genius and AT's high production values make Company something more than a mere history lesson.