Masters is at work on his third book (he also published Finding Freedom, a collection of prison writings, in 1997). This one is going to be called Out of Bounds, a fictionalized retelling of his early-1970s childhood, he says, that will explore the abuse and molestation he says he experienced as a youth. "Out of Bounds" is the single most prevalent stenciled signage on the walls of San Quentin. The signs inform inmates that they've entered a restricted area.

Masters, a native of Long Beach, covered a lot of biographical ground in That Bird Has My Wings, which told the story of his rough upbringing, his four siblings parceled out to foster homes, him getting shuffled from a nurturing foster-care environment to another that was full of violence and abuse. All of which led to his life of violent crime as a young man.

Masters spent 21 years in the Adjustment Center, and turned to Buddhism and meditation to help survive the intense psychological strain of long-term solitary confinement. He has a dedicated support network on the outside that includes renowned Buddhist author Pema Chödrön, and a legal team at work to get his conviction overturned. Masters says Chödrön understood why he had undertaken the hunger strike, though she did not support his decision.

Some inmates, Masters says, have come to a kind of peace on death row; they've outgrown their criminality, but it can leave them in an awful and hopeless limbo. "Some people have made the transition," he says, "but there are more suicides than executions here."

Masters' Buddhist practice and meditation have kept him grounded in the face of a death sentence handed down after he was implicated in the 1985 murder of prison sergeant Howell Burchfield. "Spiritual grounding is a real, real, enduring force if you ever find yourself in a situation like this," Masters says.

There are all kinds of ways to torture yourself on death row, he says, which include dwelling on "the contradictions in your life, the callings that you will think about for the rest of your life." Whether an inmate is innocent or guilty, "death row means you are in a lot of trouble, and you sit with that—my writing, that is how and where I found my greatest reflection of that fact."

Masters was sent to San Quentin in the early 1980s to serve a 10-year armed robbery sentence and then joined a prison gang. A few years into his term, he was implicated in the death of Burchfield and charged with sharpening a piece of bed frame into a shank, which was then fashioned into a spear, using rolled-up paper. Two other inmates were given life sentences without parole for their role in the murder; Masters got the death penalty.

There's a website called the Officer Down Memorial Page (odmp.org) that honors law enforcement officers killed in the line of duty. The entry for Burchfield contains a quote from Euripides that has a particular potency when it comes to Masters, who has maintained his innocence all along: "When a good man is hurt, all who would be called good must suffer with him."

I ask him about his writing process, and Masters enthusiastically pulls out a white five-gallon bucket from the back of his cell. That's his writing chair. A large board propped on his rack serves as his desk. Then he shows me his pen.

When he was in the Adjustment Center, Masters' writing implement consisted of a floppy pen tube sans its plastic outer shell. He's been in the East Block since 2007 and takes apart the pen and shows me how it used to be. He gets a regular pen here. 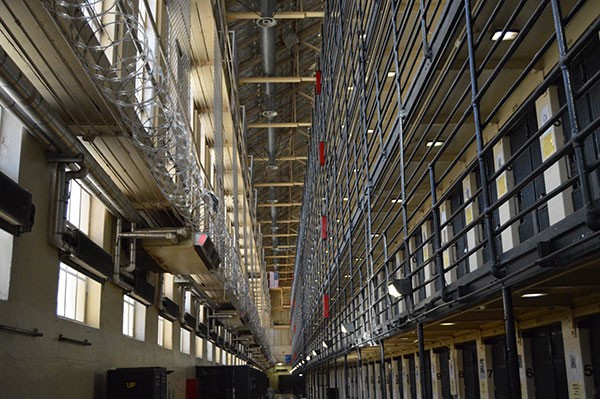 In San Quentin, and especially on death row, the smallest of details and items, which in the outside world would be considered trivial and mundane, can take on a new kind of value and force. Masters laughs as he shows me the other key piece of his writing kit, a tan crocheted hat. "Don't tell anyone, but I need my writing hat. I can't write without it."

Masters' many supporters are adamant that he is innocent of the capital charge that landed him on death row, and with a little bit of luck—and a positive ruling from the California State Supreme Court—he may find himself in a whole new situation by the end of February.

In the meantime, there's a lot of old-fashioned Buddhist non-attachment that has to be brought to bear on the outcome. On Nov. 15, the court heard oral arguments from his defense team and from prosecutors.

"The case is still alive," Masters says, and the clock is ticking on the court's 90-day window to issue a ruling. He could be looking at a new trial, or more of the same. Either way, he's ready. "Life changes one way or the other," Masters says. "One thing I have to do is be in the center; that's where my practice is. Being in the cell, it is so small and you get pulled—it is scary. You feel you are being pulled one way and then you are pulled the other way—the fear of wanting to stay in, the fear to get out—and so it is just so powerful to stay in the center."

His hunger strike ended when Davis came to him in the hospital, Masters says, "and pointed some things out to me. I felt blessed. He allowed me to take a step back when he said, 'You made your reason known.'"

But he couldn't bring himself to eat the prison food after. "I couldn't eat none of it," he says with a laugh. "I stared at all that food, looked at it and touched it. But I couldn't eat it."

We talk about the the idea that you "always want to leave a little bit on the plate," as a gesture, perhaps, of gratitude and solidarity with the suffering—or to simply indicate that you are full. He says of his hunger strike, "You are doing it for somebody, and you got something out of it, too. It was about awareness, not making a demand."

Masters is 52 years old and says one of the great challenges for any death row inmate is to acknowledge one's misdeeds while also leaving open the possibility for a kind of deliverance via personal growth.

In his 35 years at San Quentin, he says the enormous challenge for inmates is to acknowledge "that you can be a better person. There's regret and there's growth. These are the circumstances we all have to deal with, one way or the other. You can have the regret, but also the determination to not give in. You damage a lot of people when you do robberies, and I cried like a baby when I got here. The only thing you can do is sit with it, and say, 'We are real human beings.'"