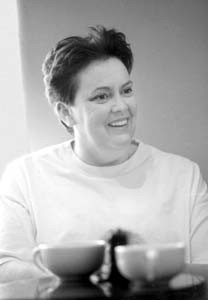 Bean there: In just four years, Condra Easley of Renaissance Pastry in Santa Rosa has become a chocoholic's best friend.

Chef Condra Easley has a passion for chocolate

PITY THE POOR reporter. The thousands of bittersweet, semi-sweet, and white chocolate calories placed with seeming innocence on clean paper doilies must somehow be womanfully consumed and bravely documented. Alas, it's just that kind of a job.

Fortunately, pastry chef Condra Easley is there to lead the charge. "Try this one," she instructs. Oh, one sighs, mustering all strength and courage, all right.

"Can you taste the arc?" she asks.

As foodie culture itself explodes in an arc raised by the flushed economy, some waxy chocolate bar from Pennsylvania no longer satisfies the educated palate, even if it tries to insinuate itself with a Kiss. However, a delicate little wafer with a 59 percent cocoa mass that has been flown over from Belgium, coddled into a ganache, folded into a mousse, or coaxed into a butter-cream casing may be exactly what you never knew you were looking for. A little knowledge is a powerful thing.

It has certainly changed Easley's and emphatically for the better. Co-owner of the award-winning Renaissance Pastry in Santa Rosa with sister Deborah Morris, she will confess to a mild fondness for Reese's Peanut Butter Cups, but her passion is reserved for excellence.

Trained in part at the Cocoa Barry School in France, Easley has developed a culinary sense so acute as to discern whether cows in Petaluma are eating grass or corn. She doesn't sniff it in the air--as Petaluma residents undoubtedly do when the wind changes--but rather, she can see it in the butter, feel it in the whip, and taste it in the cream.

"They think I'm nuts," Easley says with a laugh, relating that the Clover-Stornetta dairy finally had to send a chemist to her kitchen to confirm the difference.

But while Renaissance Pastry--opened in September 1995 after Easley and Morris moved from Colorado, and a perennial winner at the Harvest Fair ever since--is renowned for its butter-cream frosting and elegant cakes, the only cream we're seeing today is in the coffee. Arrayed on a silver baking pan are the aforesaid doilies, each piled with a different cocoa mouth-swoon.

Easley, who has just finished her quarterly stint teaching wedding cake production to professionals at the Culinary Institute of America and on May 27 teaches a "Chocolate, Chocolate, and More Chocolate!" workshop at Food for Thought in Santa Rosa, is on a mission.

"I feel that it's our job to introduce [excellent chocolate]. People often comment that it's not too sweet, because people are used to having things that are very sweet. If you look at the ingredient list, often the main ingredient is sugar, and it shouldn't be.

EXPLAINING THAT cocoa beans are experiencing the same boutique-styling craze as coffee beans--with individual plantations producing signature products--Easley returns to the vintner's theme. "When we talk about chocolate, we use the same kind of terminology used in wine," she says, selecting a piece of Scharfeenberger domestic bittersweet and popping it in her mouth.

Are we talking a sassy piquant piece of chocolate with great legs?

"Well, I've never had one with great legs," she laughs, "but as far as fruity, acidic, vanilla notes, smoky, cherry--it's very similar. And there's that arcing flavor, just like with wine. When you drink wine, it hits in your mouth in different places--well, it's the same with chocolate. As you're eating the chocolate, it develops in your mouth."

Bittersweet develops more slowly, but as with a piece of Scharfeenberger, when it does hit, it packs a wallop. Pineapple, cherry, and raspberry flavors all come swarming out of heretofore unknown areas of the palate. The winemaking context is furthered as this chocolate is produced by the winery of the same name, which Easley terms "the only non-industrial chocolate manufacturer in the United States."

Using vintage equipment that allows the spice of human error to flavor the product, Scharfeenberger chocolates have only one drawback, in her estimation. They sell too quickly. "It needs to sit and mellow," she says. "But this stuff is out the door the minute it's made; it doesn't have a second. Consequently, it's really iffy and not consistent--each batch tastes different."

WHITE CHOCOLATE is offered next. The Guittard brand, which is commonly used in bakeries and restaurants, is pale and reveals a musty, packaged flavor that is instantly recognizable.

"People get used to that bland, conforming kind of white taste, and they think that that's what white chocolate is supposed to be all about," Easley says.

The more elite Callebaut brand, however, has a rich ivory sheen and tastes, well, if not exactly sassy and piquant, really darn good in an ineffably melting kind of way.

Tender Callebaut 811 semi-sweet rounds are served. Like the Platonic ideal of tollhouse chips, this Belgian company's offerings are so extensive that they number rather than name them, like astronomers finally giving up and numbering the stars.

Easley's staff is now firmly gathered around the tasting tray. The Callebaut 811s are popped and each employee wears a thoughtful, inward expression as the small discs seduce the tongue. "What do you think?" Easley asks.

The chorus is singular. "Ummmmmmm."