Not to be confused with its coconut brethren, the macaron is the oldest dessert to make the newest splash 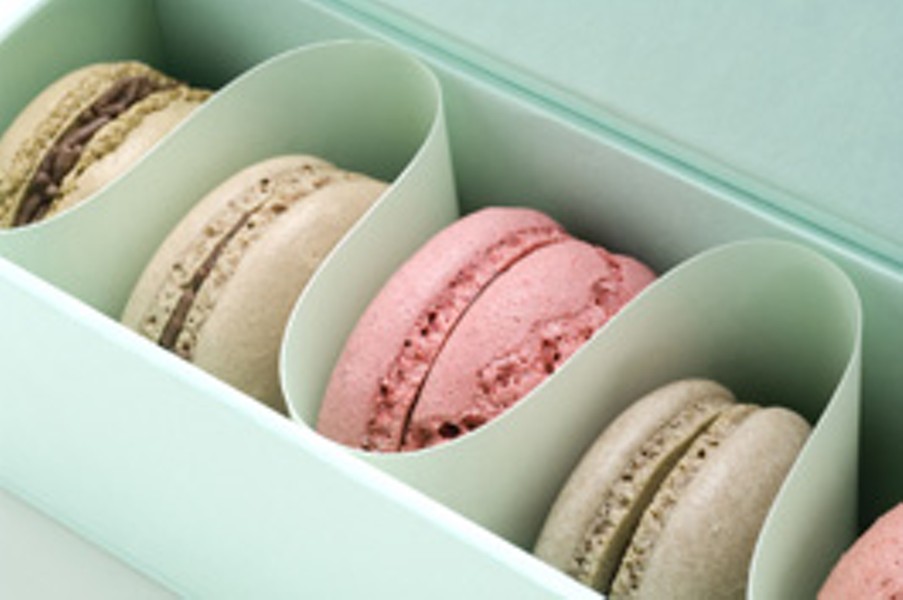 As the century turned, Americans were completely sugar high for the cupcake. After hyperstylish Carrie Bradshaw enjoyed a retro, pink-frosted cupcake from Magnolia Bakery on an episode of Sex and the City, the fashion world became smitten with the little East Village bakery. Cupcakes, with their perfect ratio of frosting to cake, were no longer relegated to the world of kindergarten birthday parties. Exotically flavored, delicately frosted cupcakes were featured in Vogue spreads, and Magnolia Bakery's cupcakes appeared in movies like The Devil Wears Prada and in SNL's 2005 instant classic "Lazy Sunday" digital short.

Just as quickly, the trendy desserts radiated outward from Lower Manhattan. As a luxury, cupcakes, with their humble origins, single serving size and ease of preparation, lent themselves to democratization and offered a taste of indulgence in an economically challenged decade. But America might have finally overdosed on them. In fact, the new cupcake might just be a cookie, the French macaron.

Not to be confused with the kiss-shaped, double-o "macaroon," a coconut cookie often dipped in chocolate, the macaron is a biscuit composed of delicately baked meringue and finely ground almond flour. Ideally, the crunchy exterior of the cookie should give way to an airy interior, a satisfying chewiness and a light but compelling flavor. Perhaps most distinctly, macarons distinguish themselves from the realm of regular cookies by their extraordinary colors, which can range from creamy off-whites to peacock blues, mint greens and rosy pinks.

The culinary history of the macaron is an elusive one, but generally food historians believe that Catherine de' Medici's chef brought the macaron from Italy in 1533 and served them at her wedding to Henry II. But it was two Carmelite nuns, sisters Marguerite and Marie-Elisabeth, who established the macaron as a French classic. When the French Revolution dissolved their religious congregations, the sisters baked and sold the cookies, which had been an important staple of their monastic diet, to support themselves. The popularity of the Champagne-colored biscuits, not unlike chewy sugar cookies, grew rapidly, and the women came to be known as the "the Macaron Sisters." Today in Nancy, a city in northeast France, Maisons des Surs Macarons purports to sell macarons made from the nun's original recipe.

The cookies were traditionally served in pairs, but it wasn't until the 1860s that Pierre Desfontaines Ladurée, a cousin of famous bakery founder Louis-Ernest Ladurée, hit upon the idea of putting the patties together into a sandwich, joined by ganache, jam or butter cream to create the "Parisian macaron." With the concept of double-decker macarons came the notion of flavoring them, but choices were largely limited to chocolate, vanilla and occasionally raspberry until the 1980s, when Pierre Hermé, who originally baked for Ladurée, expanded the menu of macaron flavors to include everything from rose, orange blossom and anise to jasmine tea, vanilla olive oil and basil lime. Today in Paris, ethereally colored macarons are displayed in patisserie shop windows like jewelry, and Ladurée and Pierre Hermé continue to vie both for the hearts of tourists and locals alike.

Macarons have had a cult following for years, but they are now beginning to see the same sort of pop-culture endorsement that inspired the cupcake's all-out celebrity status. Ladurée macarons made a number of cameos in Sofia Coppola's candy-colored Marie Antoinette, Gossip Girl named-dropped Pierre Hermé as trendsetter Blair's favorite, and Jason Wu, the designer behind Michelle Obama's inauguration gown, teamed up with the legendary pastry chef Francois Payard to feature the cookies in the December issue of Food & Wine. Even Google Insights, which breaks down the volume patterns of internet searches, shows "macaron" on a steady progression into the American consciousness.

Popularized in Paris and eaten at Versailles, macarons certainly have more elitist origins than the cupcake, but that might just be part of their appeal. They are difficult to bake and have a shelf life of just a few days, which means they are likely to remain a specialty pastry. With most bakeries offering hand-crafted cookies and innovative flavors per season, each cookie is a piece of art. Prices reflect this individual attention and luxury ingredients, with most macarons costing between $1 and $3 apiece, and some, like Pierre Hermé's white truffle macaron, commanding prices as high as 8 euros.

This has, of course, not inhibited chains like Starbucks, Trader Joe's or McDonalds—which sells individually wrapped versions of the cookies in its Parisian McCafes— from trying to cash in on the macaron's rebounding fame. But their mass-produced take on this artisan treat have met with chilly reviews from the food-blogger community, whose "food-porn" style photographs and lavish descriptions are largely responsible for the macaron's Stateside momentum.

Ultimately, it is the elusive nature of the macaron that's likely to bring it out on top. Macarons are subtly sweet and often difficult to find, and baking them requires patience and dedication; as a dessert, they inherently balance indulgence with restraint. Anticipation can be delicious, and seeking out the recipe is half the fun.

Food&–related comings and goings, openings and closings, and other essays for those who love the kitchen and what it produces.