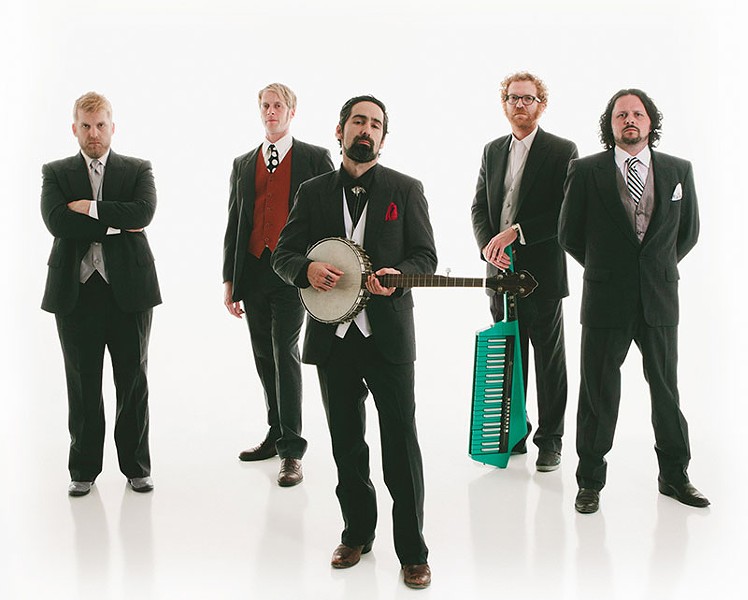 Eric Earley has bluegrass in his bones. The songwriter and front man of outlaw country rockers Blitzen Trapper was raised in the wilds of Oregon, listening to the traditional folk of Doc Watson and playing banjo alongside his musician father from the time he was 6 years old. After a brief stint at a college in the Georgia mountains, Earley returned to the West Coast and settled in the melting pot musical hub of Portland in 2000.

While Earley's penchant for playing house shows passed the time easily enough, it was reportedly his father's dying wish that Earley pursue a real career in music. And so it was that Blitzen Trapper came to be in 2003.

The band began life with a simple, straightforward alternative rock sound, influenced by acts like Smashing Pumpkins and Nirvana—still a powerful force of nature in the Pacific Northwest even then.

Eventually, the bluegrass came out in Earley's work, and the picked guitars and wandering bass lines soon broke Blitzen Trapper away from the rest of the Portland pack. By 2007, the band's blending of psychedelic roots and vintage 1970s folk was garnering them wide acclaim and an impassioned fan base.

Now, ten years plus into their life, the band is still evolving, and their latest album, 2013's VII (their seventh release), is a testament to the eclectic and colorful rhythms that have become the staple of Blitzen Trapper's scene. This album is a funky, downright groovy record that continually surprises at every turn while still reveling in the group's signature alternative country rock.

The band still possesses the joyful, effortless fun of those house shows in their sound. They get the party started right with opening track "Feel the Chill," combining a harmonica drawl and the tell-tale vinyl scratching of a DJ about to lay down the beat.

This trend continues throughout VII, as if Waylon Jennings and Stevie Wonder were both prominent forces in Earley's subconscious, manifested in the high tempo, yet laid back feel of the record as a whole.

For the last year, Earley, along with band mates Erik Menteer (guitar/keyboard), Brian Adrian Koch (drums/vocals/harmonica), Michael Van Pelt (bass), and Marty Marquis (guitar/keyboards/vocals/melodica) have been touring the country in support of the album, and this week they make their way to the wilds of Sebastopol.

Opening the show is another buzz-worthy artist in Cassorla, an indie rock trio whose members split time between NYC and LA, and whose debut EP, Amigos, is a sunny, fuzzy jam of feel-good tunes with lush, lo-fi dreaminess aplenty. The EP even features appearances by actress Aubrey Plaza and Earley himself, which should lend to some fun onstage collaboration this week.