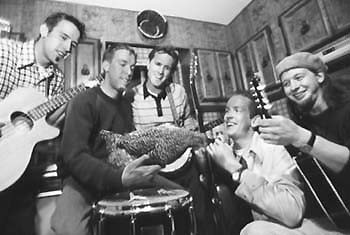 Countrified: Cropduster--can they take the heat of the kitchen?

INFILTRATING the weekly band practice of local favorite Cropduster was a great idea. After all, talking about music holds about as little truth as singing about football, so what better way to get the real skinny on Santa Rosa's most enigmatic band than to catch them, gloves off, at their most honest musical moments?

The rehearsal quickly shows why Cropduster slip out from under any conventional labels. The members, strewn about drummer Jamie Voss' living room amid a cacophony of cheap beer and equally cheap friends display an enormous range of communication.

Quoting from countless years of acquaintance, these jokers run the gamut from easy camaraderie to caustic criticism, from technical mastery to goof-off improv, from bad jokes to sincere revelation.

"We're all good friends, so if we weren't together playing music we'd be here doing something else," says Justin Barr, 27, the band's pedal-steel guitar player, glancing quickly to his beer can as if to suggest exactly what that "something else" might be.

This and similar sessions have resulted in a music that could be described as modern honky-tonk. ("Regressive American music," is Barr's apt description.) Far from being a send-up of corny country notions, Cropduster offer an understanding and appreciation of a genre that shines through in performance.

If the music of Merle Haggard, Buck Owens, and the Flying Burrito Brothers seems an odd fit for the 20-somethings of Sonoma County, understand that Cropduster belong to a growing list of local musicians who've realized that recent forms like punk and its grungy alternatives are in the tailspin of their veracity and have looked elsewhere for suitable outlets.

"This was a punk band a few years ago. We played full-on electric guitars, trying to make it loud and fast," says Barr. "Then we brought in a steel guitar to countrify some obscure punk songs, and these became the songs we liked the most.

LESS VOLUME has yet to signal less fun at the band's live shows. Their humor and exuberance have established a loyal following, and if it somehow turns out that the upbeat sound and good-time themes facilitate libation, so much the better for the band and the venue.

"We play to social settings, so drinking has become a unifying theme," admits electric guitarist Brian Fitzpatrick, 27, whose self-penned, cautionary ballad about alcoholism may very well be the band's most poignant moment. "The bottom line has always been music."

Cropduster obviously have a good time selecting, learning, and ultimately ripping through a large repertoire of classic country cover songs (Hank Thompson's honky-tonk anthem "The Wild Side of Life" and Gram Parson's "Oh, Las Vegas," to name just two), but it's the original numbers featuring the lyrics of vocalist/guitarist Andy Asp that provide the group's most impressive and ambitious aspect.

"It was the stories in those old songs that attracted me," explains Asp, 27.

He doesn't mix motifs. His own stories follow rightfully in the tradition of country's singer-songwriters. Within a lyrical tradition that spawned such humor as "I'd rather have a bottle in front of me than a frontal lobotomy" and promoted such macho pathos as "A Man Doesn't Cry," Asp manages to weave a modern element into his compositions. His story lines mirror those of the great honky-tonks, lamenting and celebrating the shady sides of life, but in this case the sentiments and locales are both identifiable and more than vaguely familiar.

Rounding out the band is bassist Paul Hoffman, whose presence next to Voss' up-tempo drumming supplies the band's rhythmic base.

On top of this come Fitzpatrick's leads and Asp's rhythm changes. Riding atop the entire ensemble is Barr's whiny laptop steel.

Don't be surprised to see at least one of the band bring out a mandolin for rootsier numbers.

Cropduster are now in the mix-down stage of their first CD, a yet-to-be titled effort for Petaluma's Flying Herald label, set for release soon.

"It's something we want to look back upon in 20 years with some pride," agrees the band.

If these guys can take the party into the studio, show off their enjoyment of the form, and manage to tell a few good stories, they might just be on the right track.