TIP OF THE CAP

Ironically, one of the main bulwarks against the emissions cap so far has been the California Air Resources Board (CARB), the agency that implements California's climate change programs. In a letter to the BAAQMD last September, executive officer Richard Corey flatly stated that "a local cap on Bay Area refinery emissions will have no effect on overall GHG emissions . . . Any emissions reductions from a Bay Area refinery cap would likely be compensated by emissions increases (also called emissions leakage) in other parts of the state. This emissions leakage would likely be associated with shifts in business activity outside the Bay Area."

Corey's reasoning is tied to a state-level greenhouse gas reduction program that applies to stationary pollution sources like refineries and power plants: cap and trade. The program caps carbon emissions from these entities, with yearly reductions in allowable levels of pollution. From 2015 to 2020, for example, the cap is dropping by 3 percent per year.

But the program is aimed at providing maximum flexibility to the oil industry, so it allows them to buy credits, or offsets, from carbon-saving projects elsewhere in the United States, or in Quebec, or to sell credits themselves if they've reduced their own emissions.

Environmental-justice advocates have criticized the program for allowing polluters to buy their way out of reducing emissions at the source—and thereby allowing them to continue burdening communities with pollution. Chevron is a case in point. The company was California's second-largest greenhouse gas emitter in 2013, according to CARB data. But it was also the largest purchaser of offsets under the cap-and-trade program in its inaugural two years between 2013 and 2014, according to a recent study by the Oakland-based California Environmental Justice Alliance.

The company used forests in Maine, Michigan, South Carolina, Willits and Humboldt County—and an Arkansas-based project to destroy ozone-depleting substances—to offset its pollution, which mainly occurred in Richmond. As a result, its emissions were undiminished. If the company were to increase emissions through full-tilt tar sands processing, it could purchase additional credits. Another state program, the Low Carbon Fuel Standard, also creates an incentive to reduce at-source refinery emissions but does not require it.

The proposed Bay Area emissions cap would have no trading component.

While some sources say that CARB may be reconsidering its stance, the oil industry's chief regional lobbying group, Western States Petroleum, has seized on the agency's current position. In a statement for this story, lobby president Catherine Reheis-Boyd noted that "if BAAQMD is considering a local greenhouse gas cap on refinery emissions, [Western States Petroleum] strongly encourages the District to take into account the California Air Resources Board's concerns. CARB has clearly stated that a local cap will: (1) not reduce statewide GHG emissions; (2) reduce cap-and-trade efficiencies; and (3) undermine statewide efforts to reduce GHGs."

Environmentalists describe these arguments as right-wing and defeatist. "Cap and trade is being used as a barrier to creating a simple limit on refinery pollution," Karras says. "Tell me if their argument doesn't sound a lot like what the Republicans are saying about why we shouldn't have a climate policy, which typically goes something like, 'China will just pollute more anyway, so we might as well get the economic benefits.'" 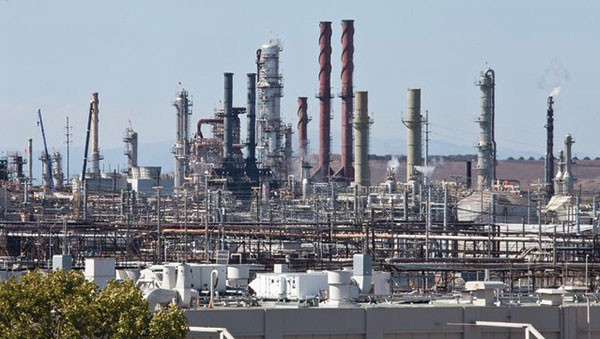 The NRDC's Axelrod agrees. Though his organization supports California's cap-and-trade program, he called the argument that emissions' "leakage" would result from a Bay Area refinery emissions cap "far-fetched."

"Fundamentally, it sounds like the same argument that happened with Keystone XL, which we labeled 'the inevitability argument,'" he says. "The oil industry's line was that if you reject Keystone XL, the amount of tar sands it would have facilitated would inevitably happen anyway. But that obviously hasn't been the case." Not yet at least.

Cap proponents note that any increases in Bay Area refinery production are likely for export.

One of the BAAQMD's most influential directors is Contra Costa County supervisor John Gioia, a fourth-term Democrat who represents the county's westernmost urban area, including Richmond. He serves as the Bay Area representative on the California Air Resources Board, a post he received from Gov. Jerry Brown.

Following the signing of the Paris climate change pact in December, whereby 195 countries pledged to reduce their greenhouse gas emissions, BAAQMD voted to convene a regional climate change summit this October. It will explore strategies for achieving a regional 80 percent reduction in GHG emissions by 2050.

Gioia is taking a wait-and-see approach on Refinery Rule 12-16. "The main point is that we need to keep the pressure on to keep reducing criteria pollutants, toxic pollutants and greenhouse gases," he says. "Whatever the board ends up adopting will be the most far-reaching regulation at a local air district of greenhouse gas emissions and I think that's an important acknowledgment."

San Francisco County supervisor John Avelos is among the BAAQMD directors who unambiguously support the emissions cap. Los Altos city councilmember Jan Pepper has not publicly committed to voting for the cap, but said in an interview that she is motivated to prevent the tar sands from coming to the Bay Area. A version of the same Bay Area Refinery Workers letter sent to Zane's constituents also landed in mailboxes in Pepper's district, a fact that she "didn't appreciate, although it provided a teachable moment where I could communicate with my constituents who didn't already know about these issues."

The letter also went to BAAQMD directors' districts in Alameda and Contra Costa County districts. Steelworkers Union Local 5 organizer Mike Smith said his office had received numerous calls about the letter and that he was also upset by it. He noted the union's continued support for stronger refinery regulations.

"We're the first people affected by the emissions, whether they're from catastrophic failures or longer-term emissions," he says. "Our members are a part of these communities, and we want to have the cleanest and safest workplaces possible."

Sonoma County's other BAAQMD representative, Petaluma city councilmember Teresa Barrett, is also in wait-and-see mode. "I want to make sure that what we're doing is scientifically verifiable and really will get us to the outcome that we're looking for."

Napa County's lone BAAQMD delegate, 2nd District supervisor Brad Wagenknecht, takes a similar position and emphasizes the difficulty in navigating a regulatory process with the knowledge that the air board is likely to be sued no matter what it does, and calls for "both sides" to temper their criticism of the agency's work.

Zane did not respond to a request for comment.

The Committee for Industrial Safety's most recent disclosure statement with the California secretary of state lists Walt Gill, government affairs manager at Chevron, as the organization's president; Chevron attorney James Sutton is listed as treasurer. Neither Gill nor Sutton responded to requests for comment. Gill was among those who signed in as an attendee at the recent BAAQMD meeting.

The oil industry has been California's biggest spender on lobbying and elections for years, with much of their effort aimed at climate-change legislation, California secretary of state data reveals. California mandates GHG emissions reduction by 20 percent from 2005 levels by 2020. Last year, the state moved beyond that goal with SB 350, which requires that 50 percent of electricity generation must come from renewable sources, and that energy efficiency of buildings double, both by 2030.

In the run-up to the adoption of SB 350, oil companies unleashed a gusher of cash. The industry spent more than $31 million lobbying California legislators in 2015, according to data on the California secretary of state website. The effort appeared to pay off, as moderate Democrats agreed to strip a provision from SB 350 that would have required a 50 percent reduction in petroleum use by California's cars and trucks by 2030.

Gioia says he has never seen anything quite like the industry's recent Bay Area Refinery Workers mailer. At the June 1 BAAQMD meeting, he noted that it has become well-known in Sacramento that the oil industry will attempt to pass legislation to limit the authority of local air districts if Refinery Rule 12-16 goes forward.

Proponents say that a regional refinery emissions cap will enable the BAAQMD to fulfill its role in a struggle to starve the tar sands beast, and to stand up to the power of the oil industry. In that way, the agency would fill a regulatory gap not addressed by state climate programs, such as cap and trade and the California Low Carbon Fuel Standard.

But proponents say the cap is also a pragmatic approach to the tar sands invasion the Bay Area faces. The full BAAQMD board of directors will hear a staff presentation on Refinery Rule 12-16 at a San Francisco meeting June 15. Expect it to be well-attended. "Oil refining is the largest industrial emitter of GHG and [particulate matter] in the Bay Area," reads a recent letter from 13 regional community groups who are tracking the tar sands invasion, "and yet refineries here have no facility-wide limits on these emissions, though other industries do. Keeping emissions from increasing would not require any change in current operations of any refinery."