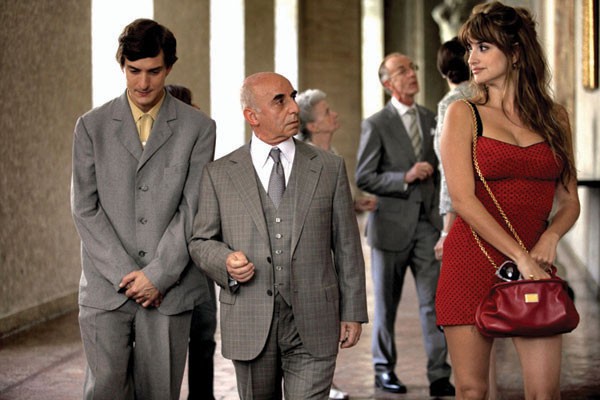 Huge helpings of Roman vistas, including a 360-degree shot of the Piazza del Popolo, are served up in Woody Allen's newest film, To Rome with Love. Also served up are jokes older than Tacitus. It's a sprawling, multipart tale; Allen was evidently thinking Boccaccio, or at least Boccaccio '70.

Penélope Cruz plays a gold-hearted hooker interfering with a bewildered newlywed couple, Antonio (Alessandro Tiberi) and his very pretty and shy wife, Milly (Alessandra Mastronardi). Cruz concludes her utter conquest of Sophia Lorenism by getting a retro hairstyle, speaking Italian and wearing a skintight crimson dress. Unfortunately, this rare sight is introduced with the immemorial "Surprise! You have won a free prostitute!" farce.

In a different triangle, Ellen Page plays a flighty actress visiting a couple, Jack and Sally (Jesse Eisenberg and a squandered Greta Gerwig). Here, Page looks even more like a director's relentless construct than she did in Juno. As an unasked-for mentor, Alec Baldwin materializes to warn Jack about all those irresponsible trifling dames who listen to Bartók and pretend to read Yeats. (Take Allen's word for it, such girls are still roaming loose, wreaking havoc.)

Allen himself plays a retiree going to Rome with his wife (Judy Davis, another rare sight); his time-tested chicken-liveredness begins on the Alitalia flight ("Turbulence, my favorite!"). And Roberto Benigni stars in a pay-off free snippet about the price of fame.

And if one despairs at the Neil Simon–esque lines in the film, one admires Allen's staging of gags, as in the story of an opera singer who can only perform under specialized conditions.

There's an unignorable overlay of fogeyism here, however. Who goes to Rome and murmurs, as Baldwin does, "All these old ruins depress me"? Two separate characters complain of "Ozymandias melancholia" as they get in the way of the scenery. Ozymandias indeedius—what's falling apart here, Rome or Woody Allen?

'To Rome with Love' opens in multiple theaters Friday, July 6.