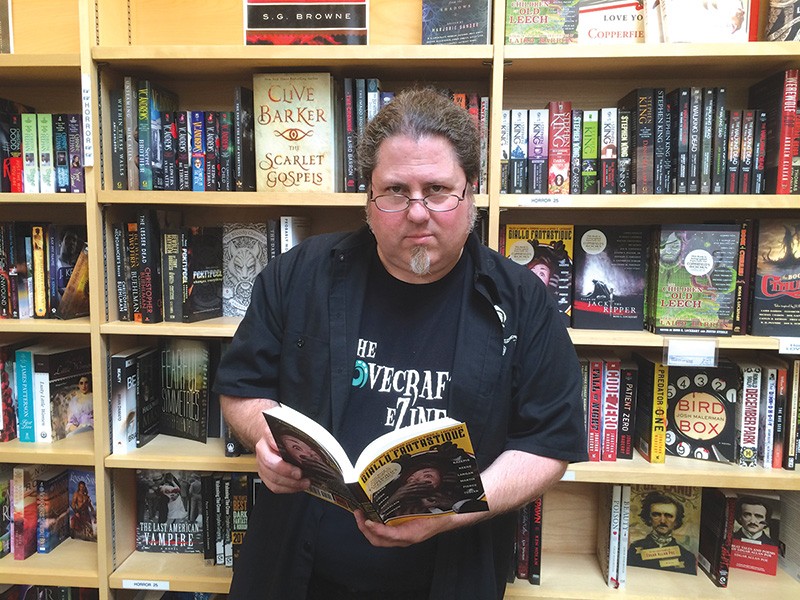 'We've been signing things left and right," says author and publisher Ross Lockhart, describing the terrifying process of buying a house in Petaluma. "Tomorrow, we're signing something else—and then we wait until we get the word the house is empt,y and we can finally move in."

Buying a home, for most people, is always a bit scary and more than a little stressful. For Lockhart, who's been living with his wife in a slightly gothic and gabled rental that used to be a church, the move marks a shift in identity.

"'Lives in an old church' has been part of the professional bio I've run in books and things for so long," he says, "it feels a little boring and mundane to say I'm moving to a 'normal' house."

Adds Lockhart, "I can only hope it turns out to be haunted!"

The distinctively goateed and pony-tailed Lockhart, who works part-time as a bookseller at Copperfield's Books, has been writing stories about ghosts, werewolves, monsters, time travelers and ethereal netherworlds pretty much since he learned to write his ABCs. His colorful and imaginative fiction has appeared in various magazines and book anthologies.

Two years ago, after several years spent working as an editor for small but high-profile genre publishers, Lockhart made a truly scary move and started his own company, the Petaluma-based Word Horde. With a name taken from the epic poem Beowulf—"The eldest one answered him, leader of the troop, unlocked his word-horde"—the boutique publisher (www.wordhorde.com) was founded, as the website proclaims, "to fight the continuing battle against monotony, mundanity, and the forces of darkness and illiteracy."

"Basically," Lockhart explains, "I wanted to create the kind of company I would want to be published by—a company that would be upfront about reporting numbers to authors, that would be honest and above-board, and would put as many resources as possible into making the book look as good on the outside as it reads on the inside."

Word Horde launched in 2013 with just one book that year, Tales of Jack the Ripper, an anthology of stories inspired by the world's most famous serial killer. Critically acclaimed, the delightfully grisly paperback was followed in 2014 by two more titles, which included the juicy horror anthology The Children of Old Leech: A Tribute to the Carnivorous Cosmos of Laird Barron.

Last month, Old Leech—which Lockhart co-edited with Justin Steele—was nominated for a prestigious Shirley Jackson award for best edited anthology. The nomination thrusts the fledgling company alongside some of the best-known publishers of horror, science-fiction and fantasy around.

The increased attention couldn't be better timed, as Word Horde moves through its most ambitious year, with plans to publish five new titles by the end of 2015.

The first, Molly Tanzer's Vermilion, a fantasy novel best described as a "steampunk Western," was released earlier this year, and is already easily the company's biggest hit.

Another collection—the Lockhart-edited Giallo Fantastique: Tales of Crime and Terror—has been garnering strong reviews since being released last month. With three more titles lined up to hit stores before the end of the year, including August's much-anticipated H. P. Lovecraft homage The Cthulhu Fhtagn!, tiny little Word Horde, like many of the monsters loved by Lockhart's growing stable of authors, has been making a large and conspicuous uproar.

"Vermilion, in particular, is exciting for us," says Lockhart, "because it was just released at the beginning of the year, but it's already finding a large audience. NPR did a feature on it. It's gotten other major coverage. It's been getting great reviews, and people have been flocking to it... I immediately wanted to put it out in front of people and say, 'Hey! Look at this. You've never seen anything like this.'"

Tanzer, it should be noted, has a short story in the aforementioned Cthulhu anthology and another in Old Leech. Laird Barron, whose writing style inspired Old Leech, has stories in several of Word Horde's collections, starting with Jack the Ripper. The list of repeat players illustrates a major part of Lockhart's vision: to build relationships among a team of writers whose names will become intimately associated with the dark subject matter and general literary quality of Word Horde.

"Part of the fun of being a publisher," says Lockhart, "is being able to say, 'Look at this cool stuff my authors are doing.'

"Artists are fragile creatures," he adds. "So being a publisher is a lot about reassuring them, telling them over and over that, come hell or high water, their hard work has been worth it, that we are going to get their book out in front of an audience that doesn't yet even know it's been waiting to read it."