Film 2008: I love you because you're frightened 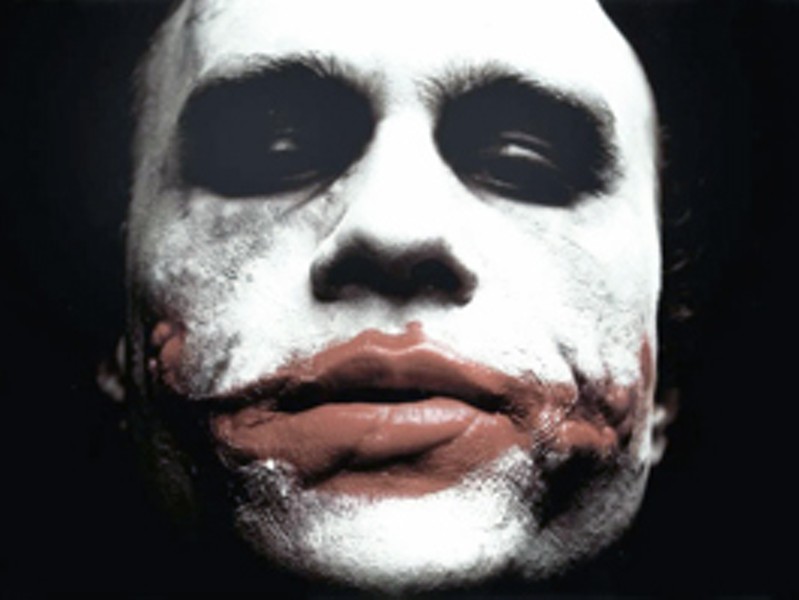 When the World Trade Center went down, the more superstitious among us might have looked at all that broken glass and thought, "Seven years bad luck." And indeed, in the seventh year, the fear grew great enough to be reflected in cinematic terms. Spielberg, being Spielberg, chose to anticipate the terror in his 2005 remake of War of the Worlds. But what this year summed up what critic David Thomson (writing about Fritz Lang) called "state-of-emergency filmmaking"? Certainly that movie everyone saw, The Dark Knight.

In 10 or 20 years, you could show this film to someone and say, "This is how scared we were." This sums up how we wondered if there was going to be an election at all, if some unthinkable even might make them pull the plug. After all, the administration openly reserved that right.

Eventually, USA Today divined the source of the Joker's voice: Heath Ledger was trying to imitate the hollowness of a ventriloquist dummy's speech, the clack of the staggered t's ("You're crazy!" "No, I'm nottttkt. "). Here was our Lord of Misrule, a gangster who, God help us, goes from thief to sociologist. (He probably would have funded a think tank eventually.)

Opposing him was a half-seen figure. The Wall Street Journal's Andrew Klavan descried Bush's face under the bat mask. Alas, misunderstood warrior, Bush did what needed to be done on the war on terror, even under the cover of darkness. Some critics pounced: Christopher Nolan's hit endorses vigilantism! This was a deliberate misreading of the film. The majority opinion, though, understood the film's double edge. Even if the child at the end of the film pleads that Batman "didn't do anything wrong," adults knew he was a criminal: Gordon knew, Bruce Wayne knew, even Batman knew.

And here was the least aesthetic screen version of the adventurer, the oversized casaba-shaped helmet, the seal-like black eyes shining like oiled ball-bearings out of the mask in the interrogation scene, when Batman foolishly tries to beat some info out of Osama Bin Joker. Clown that he is, Joker sees the funny side of it all: "I just wanted to see what you'd do. You didn't disappoint."

Two lines of dialogue summing up how we capitulated in the face of panic—how to our shame, we turned over the weapons and the armies to schemers. Two lines that sum up seven years of war and financial ruin.

Given this bleak picture, others escaped to see Wall-E the robot. The Dark Knight takes a first place for Zeitgeist this year and a second place for film quality. Sure, it's too long. Director Christopher Nolan, being Nolan, tried to invent a new shape for a movie, an arc with an annex. But the single best movie of the year was Wall-E, and that was one-and-a-half hours of bliss.

Showing, not telling, his story, director Andrew Stanton sweetened the mood with Thomas Newman's soundtrack. He is one of the smartest and most feeling composers working, in modes as different as this and Revolutionary Road. The love theme, combining Irish harp figures with Michel Legrande&–style strings, is profound movie music. Maybe I'm overpraising. Wall-E appealed to cinephiles who cherish a snippet of some forgotten movie the way that Wall-E adored his few minutes of Hello, Dolly. If a villain is a movie lover, we will forgive him; if a hero is a movie lover, we will cherish him.

The critic Robert Warshow's famously tough attack on Chaplin should be considered. Watching Chaplin, Warshow wrote, "He has no love to spare, he is too busy pushing his own demand: love me, love me, poor Charlie, sweet Charlie." But this puttering strange robot was so much in his own world that we could meet him half way. It may be that, like Chaplin before him, director Andrew Stanton didn't understand the nerves he was pulling. In interviews, he downplayed the seriousness of his satire, depicting American humanity as devolved, all-consuming blobs, hovering away from the planet they had fouled.

Stanton insists that the love story is where he turned his attention. That is inarguable. The Wall-E and Eva love duet was primal stuff—Joe Lunchpail in love with an unearthly beauty, probably too good for him. In it was the idea of hope from some unlikely union, set against an earth that endures and forgives.

The rest of the top 10 films of 2008 are of less impact but of highest quality. Milk, timely as could be, is a success because of an actor showing unlikely lightness and grace. Can we hope for a new Sean Penn afterward, eschewing the temptation to go "full retard"? The documentary Up the Yangtze offered a deliberately flooded China and a clear vision of the next century, and I am so glad I won't be here to see it happen.

My Winnipeg: Oh rare Guy Maddin, thank you for this memorial to your home town, both fragrant warm blanket and smothering sweaty pillow. (What a rebuke to the crabby cryptic Synedoche, New York. ) The Fall was the most visually glorious film of the year, if too rich, too sweet and spicy for most. Here's to old Roger Ebert, who helped get it released. (And thanks again, Roger, for that fine Dec. 3 essay against intelligent design in general and Ben Stein in particular with Expelled. Sometimes film critics can join Mencken and the muckrakers.)

Happy-Go-Lucky showed the upside of optimism, with an aged director generously conceding that it has an upside. More about Revolutionary Road later, but it was by far the most successful of the holiday prestigeers, and Kate Winslet is a stormy and fascinating tragedian. A Christmas Tale's satisfying heft and tanginess made it the best of a good crop of French films. Finally, let's remember Around the Bay, an ultra-low-budget movie still on the film-fest circuit, with the kind of incisiveness and generosity that ought to have been found in many a blockbuster.

As for the worst, why belabor it? A movie with a number in its title (Fistmaster 4: The Beatening) is usually going to be more crap than one without (see Chapter 27, 10,000 BC and the ineffable Seven Pounds).