Inside the CIA's chocolate laboratory 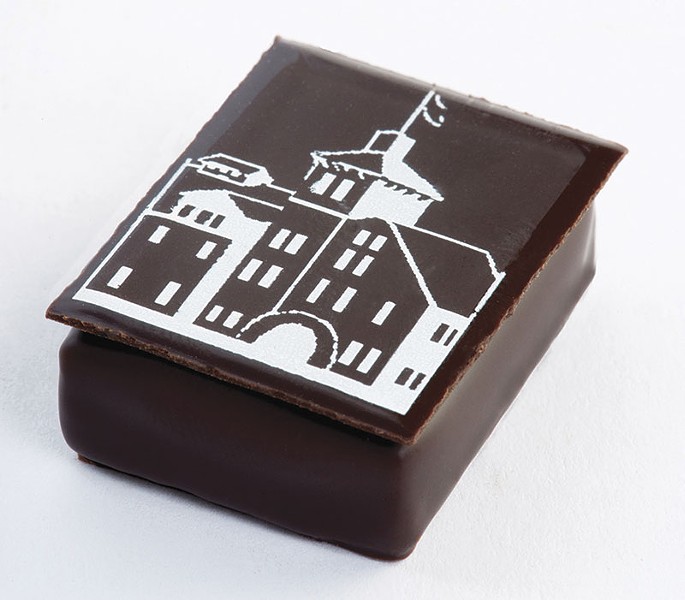 The Culinary Institute of America at Greystone is not exactly a hidden gem; its striking edifice looms off the St. Helena Highway. But there is one aspect of the world-renowned culinary school for which it's not as well known: chocolate.

In the newly dedicated Ghirardelli Chocolate Discover Center at the CIA's St. Helena Campus last week, baking and pastry graduate Katryana Zide was shaping chocolate truffles while describing the steps in the process. First she makes ganache, which, as she explains, is "basically chocolate mixed with any liquid." Often it's cream in a 2–1 chocolate-to-cream ratio; the CIA uses Ghirardelli and other brands of chocolate depending on the desired flavor. Then the liquid mixture is scooped into a pastry bag and squeezed out into what look like bulky brown meringues. After those have cooled, they're rolled by hand into balls and allowed to rest again before the final rolling.

Those are then dipped in chocolate (to maintain the confection's desired shape) and allowed to cool. The final step involves another chocolate dip, this time to get a harder outer shell, and any additional toppings like sea salt or flower petals.

Ganache is really the heart of the truffle, and this is where the magic happens. The liquids mixed in determine flavor and, to some extent, consistency. Alcohol works especially well—not because this turns a decedent treat into sneaky way to get a buzz, but because the alcohol binds with the fat in the ganache (and it can taste pretty good too).

Zide is a fan of savory-sweets, and loves to experiment with new ideas. One that works well, she says, is sage—but it changes the flavor in an unexpected way. There are also truffles made with pine or fir, giving a holiday essence that fits surprisingly well with chocolate. Lemon verbena, on the other hand, did not work, though Zide couldn't figure out why.

If a particular chocolate concoction sounds too weird to be good, chances are that's the best one to try. It might end up being just a gimmick, but when I gave the blue-cheese truffle a shot at CocoaBella Chocolates in San Francisco, it wound up being the best chocolate I've ever had (until someone adds salty bacon dust to the top of it—then we'll have a new champion). Chocolates infused with savory flavors like cardamom, rosemary and fennel are fairly common as well.

Back in the recently renovated tasting room, which is open to the public, truffles in the dramatically lit display case shone like brown diamonds. I chose a 71 percent dark chocolate rectangle—the silky, low-tannin Cabernet Sauvignon laid a bed of deep fruit for the chocolate to melt onto my tongue. Another chocolate, the circular, rose-infused dark chocolate topped with a mauve candied rose petal, detonated its floral intensity in the back of my sinus, like I had been instantly transported into the middle of a giant rose garden.

The tasting experience is only heightened by watching students make the elegant confections in the next room over, leading one to wonder what their next new creation might be.