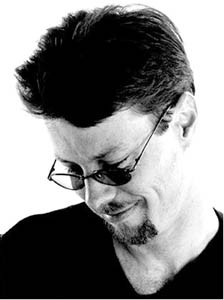 In the Moment: Dave Mac Nab keeps it fresh.

The Sound of Science

After 12 weeks working as a hired gun in the house bands for the national touring productions of The Lion King and Hairspray in San Francisco's theater district, guitarist Dave Mac Nab is eager to get back to his experimental crucible of sound, the Dave Mac Nab Jazz Lab. "I'm hungry to play!" says the highly sought-after bandleader, sideman, session player and songwriter.

Now living in Sebastopol, the New York- born and L.A.-raised musician has shared the stage over the years with Sting, Shelby Lynne, k.d. lang, Matchbox 20, Jeff Beck, Bob Weir, Rickie Lee Jones and a host of other acts. But it is the Dave Mac Nab Jazz Lab--equal parts rock, funk, Latin and blues, and with a strong rhythmic drive--that serves as the main outlet for his creativity.

The Jazz Lab is drawn from a loose-knit confederation of about 10 players, many from the same San Francisco avant-jazz collective that spawned Gen-X jazz guitarists Charlie Hunter and Will Bernard, and violinist Jenny Scheinman. That talent-laden pool of players includes drummers Scott Amendola (of the Charlie Hunter Quartet), Ches Smith (of Theory of Ruin), Jason Lewis, Alan U'ren and Devon Hoff, and bassists Todd Sickafoose and John Shifflett, among others.

"Personnel decisions are based on a combination of what I feel like doing on a particular night, and of course, who's available," explains Mac Nab, who has recorded two CDs on the Noir label. "But no matter who's playing, I can count on any of them to be on the same page as me. And sometimes I really like it when the band comes together at the last minute. While I know it's a little confusing for promotion of the shows, it's cool because I don't have time to think about the gig too much, therefore keeping it fresh and spontaneous.

"This is the spirit of the Lab--keeping the music fresh, honest and alive, regardless of the personnel or repertoire."

That sense of spontaneity comes to play during the song selection process as well, and it lends the proceedings an adventurous edge. "To me, with this type of instrumental music, it's not so much the songs themselves, but rather how they're played," Mac Nab says. "That's why a typical night for me will include Thelonious Monk, Paul Simon, Cole Porter, Sting, the Beatles, Duke Ellington, Radiohead and originals all mashed together, with the cohesion supplied by the players and their interpretations.

"I've never made a claim that what I'm doing here is revolutionary or groundbreaking," he adds, "it's just honest, in-the-moment playing that attempts to incorporate the different styles I like to play.

"We're all up there playing from the heart, and that seems to be what the folks love to hear."

Jazz pianist and post-bop composer extraordinaire Carla Bley, who organized this all-star session, calls The Lost Chords "a continuation of a search . . . of one small corner of American music." This follow-up to 2003's critically acclaimed big-band album Looking for America has as its genesis the frustration that Bley experienced as a child disappointed to learn that Sir Arthur Bliss' piano music "The Lost Chord" proved harmonically ordinary.

Years later, Bley is still searching for that lost chord, and she's come up with some doozies, including some too difficult to play on piano. She employs them throughout (while giving the rhythm section inspiring and challenging parts) on nine songs that include the title track (which opens with an entrancing slow movement), a 15-minute arrangement of "Three Blind Mice," and "Tropical Depression," a revamped version of an earlier previously unrecorded Bley piece once known as "4/4 Under the Volcano."

This newly released CD, full of catchy melodies and evoking a sense of melancholia, goes a long way to further Bley's reputation as one of the most consistently intriguing figures in the experimental-jazz scene. Visit www.wattxtrawatt.com for Bley's extensive account of the recording of this project--truly one of the most eccentric blogs on the Internet.