by Nicolas Grizzle and Tom Gogola 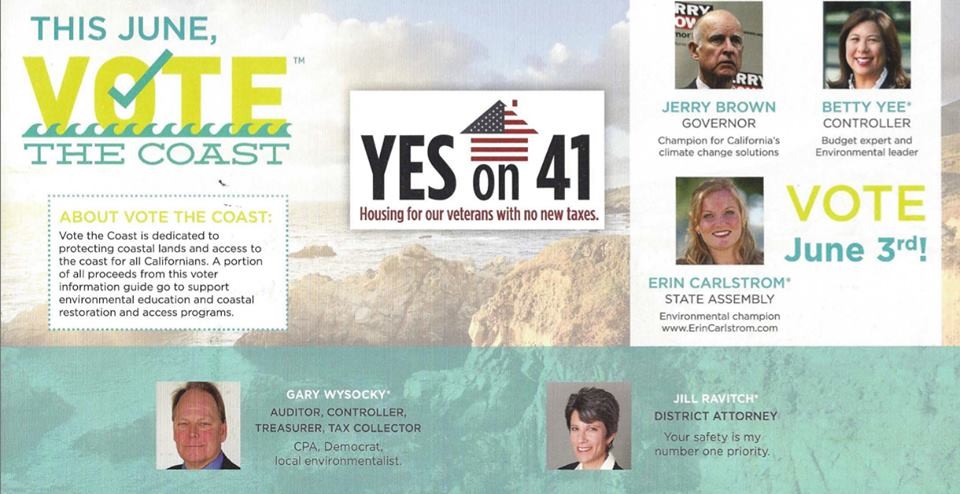 Sen. Dianne Feinstein's Emergency Drought Relief Act of 2014, passed in the Senate last week, much to the dismay of salmon and their statewide advocates.

"This measure could decimate California's salmon industry and seriously harm Oregon's ocean salmon fishery," says a statement from a coalition of fishermen and others led by the Golden Gate Salmon Association.

S. 2918 would allow more pumping from the San Joaquin River to farms and municipalities than government studies determined to be safe for juvenile salmon. The practice would continue until Gov. Jerry Brown lifts the state drought emergency. The fishermen's concern is that the last drought emergency lasted three years, and that more pumping from spawning grounds could be catastrophic. —Nicolas Grizzle

It doesn't note, however, that Carlstrom is the registered agent of Vote the Coast's parent company, Tidal Voice, Inc. Her husband, Nick Caston, is its president, according to filings with the California Secretary of State.

The Vote the Coast website explains that "all the candidates we support have pledged to make protecting the coast and bays a top priority."

Calstrom's campaign manager, Carrie McFadden, says there is no conflict of interest and that the candidate used campaign funds to pay her husband's company for the endorsement, "just like every other candidate on the slate." —Nicolas Grizzle

Jonathan Melrod had been the source of information reported in local news outlets that said Ravitch was poised to make a decision on charges against Gelhaus, who shot Andy Lopez last year.

Melrod told Debriefer that he was signaled that a move from Ravitch could be forthcoming because of recent filings in federal district court over a separate lawsuit against the Sonoma County Sheriff's Department.

That lawsuit was prompted by the Lopez shooting.

Melrod says that Ravitch had previously supported delays in proceedings on the suit, which rests on broad use-of-force issues at the sheriff's office.

"In the past, the D.A. had sought a stay in the proceedings," says Melrod. "A number of attorneys extrapolated that there was no declaration [by Ravitch] in support of continuing the stay to mean that a decision is imminent."

Lopez activists launched a "Andy Lopez countdown clock" effort last weekend to highlight what they call Ravitch's politically motivated foot-dragging on the case. Ravitch is up for re-election June 3.