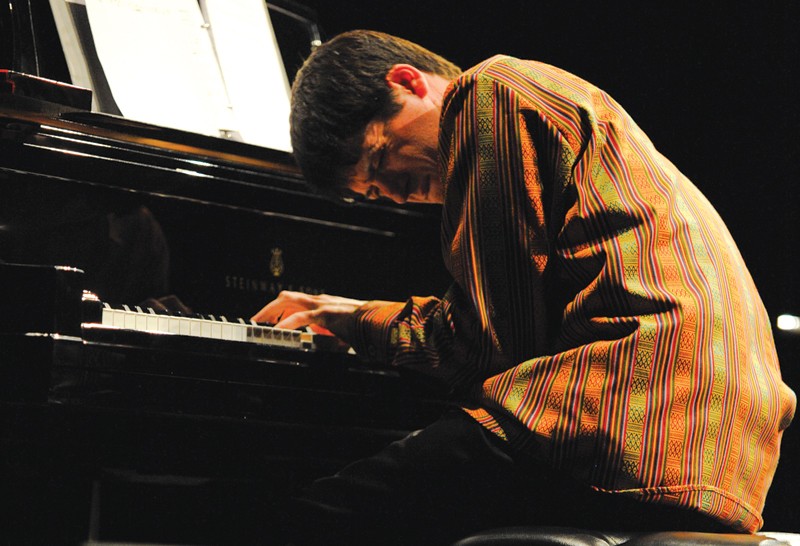 Noam Lemish was sitting on the floor of his unfurnished apartment in Bhutan eating dinner when the text message arrived on his simple, cheap cell phone. "The king really enjoys listening to your radio show," it read.

Needless to say, Lemish was taken aback. "It came out of nowhere," he says today, recalling the news. "I was quite thrilled."

Having started his life and musical career in Israel, continuing in the Bay Area at Sonoma State University and then teaching and performing in Bhutan for a year before moving to Toronto, Lemish has certainly been around in his 31 years. The global traveler shows the same kind of range in his music, and Lemish, a tremendous jazz pianist, is about to release his second album of original compositions with drummer and SSU music professor George Marsh.

But saying Lemish is a jazz pianist is like saying a multi-function Swiss army knife is just a knife. Lemish has credits as an arranger, a composer for film, theater and dance, and a performer in styles ranging from jazz to classical to the eclectic style of the San Francisco Mime Troupe, with whom he toured in 2003.

When he was not yet 30 years old, Lemish was asked to teach at the landlocked Himalayan country's only music school in 2010 (there are now two). After a few months, Lemish had his own radio show playing classical, world and jazz music. The text message about the king's appreciation came from one of the station's owners, and in the conversations that followed, Lemish was asked to compose a piece for the king's upcoming 30th birthday.

Lemish's reaction, he says today, was "Why didn't I think of that?" The only problem was that after only a few months in the country, Lemish wasn't intimately familiar with the culture, let alone the native music. And he certainly didn't want to offend the king.

"I decided to make it an homage to Bhutanese culture and share a part of myself," says Lemish. Limiting himself to the five-note pentatonic scale, a staple of Bhutanese music, Lemish awoke each morning and wrote down the first tune that popped into his head every day for two weeks. He used those melodies to sketch a five-movement, 30-minute suite. The result is The People's King, combining a little Western flavor with Bhutanese tradition, using four traditional Bhutanese instruments and a recording of monks chanting a mantra for long life. He's since rearranged it into a jazzy version, which debuted at the Healdsburg Jazz Festival in 2011.

'Wherever you go in Bhutan, you hear music," says Lemish, sitting at Flying Goat in Santa Rosa and groggily sipping coffee in the morning hours. It's early, the caffeine is taking time to work its magic, and particular phrases from Lemish require a minute to chew to reveal their depth—just like his music.

Nightfall, his second album with Marsh, is just the right mix of avant-garde, time-free jazz with structured melody and form. Some songs feature mallet percussion ostinato punctuated by gong crashes and ominous piano chords at odd intervals, such as "Cosmic Pulse." Some, like "Cape Town," are catchy melodies wrapped in drum phrases that feel like a Fred Astaire dance number. Even with music jumping, sidestepping, twirling and sliding around, everything stays together; it's a dance that is at once choreographed to perfection while improvised on the spot by two minds with one vision.

"Waltz for Pamela" is the album's only song not written by Marsh or Lemish, composed by former SSU jazz professor and bassist Mel Graves. When it's brought up, Lemish begins rummaging through his backpack. "I went to visit him, a couple months before he passed away," he says, pulling out a photocopy of a hand-written piece of music. "This was on the piano at his house, and he asked me to play it. It's stunningly beautiful." It was also the last piece Graves ever wrote. Lemish and Marsh recorded it in 2009, just months after Graves' death. Fittingly, the album is dedicated to his memory.

The duo began playing together while Lemish was still a student at Sonoma State. Their first album, Yes And, came out in 2008. Nightfall is more mature, structured and polished, even though most of it was recorded four years ago. "Collaborating with George has been a huge blessing and a gift," says Lemish. "I learn so much playing music with him." The ability to listen is the mark of a great musician. Listening to this album amplifies that truth.

Marsh and Lemish exist musically as ageless beings. When they're playing together, the only time that exists is the present. "Musical connection has nothing to do with age," says Lemish. "It has everything to do with the kind of listening and presence a person brings."