'I and You' a charming, thought-provoking surprise David Templeton 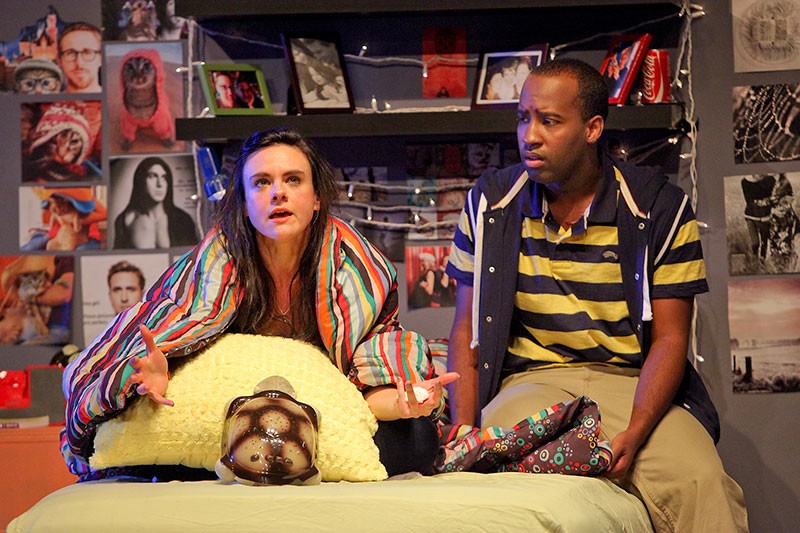 Caroline (Jessica Lynn Carroll) is a typical teenage girl—except that she's spending her senior year at home, in need of a transplant, waiting for someone to donate a new liver. Seriously ill, but with plenty of sassy attitude, Caroline hangs out in her attic bedroom, defiantly resenting her predicament.

Anthony (Devion McArthur) is a sweet, poetry-loving basketball player who's been having a pretty rough day. When Anthony appears with a complicated last-minute English class assignment, informing Caroline that they've been paired up to present a deconstruction of Walt Whitman's "Song of Myself," the articulately odd girl responds in a way that makes her new partner wonder if she's a little unhinged, or just colorful and eccentric. Reluctantly, even a bit suspiciously, Caroline accepts the challenge, though she's never read Walt Whitman's Leaves of Grass and is more interested in testing and teasing her baffled English buddy.

In I and You, Marin Theatre Company's world premiere of Lauren Gunderson's sneaky, insightful two-person play, Whitman's groundbreaking poetry is much more than just a plot point. The poem, a sensual celebration of the interconnectivity of all things, becomes a series of clues, as these two very different teens gradually discover the many things they have in common. Whitman's use of the words "I" and "you," and the way he shifts the meanings of those words throughout his poem, ultimately challenges the schoolmates to reexamine their own definitions of who they are, to themselves as well as to each other.

On a gorgeously detailed teenage-girl bedroom set by Michael Locker, the gently unfolding story seems like pretty slight stuff for a long time, during which audience members might wonder why Gunderson bothered to write a play about two nice kids doing homework. But as in "Song of Myself," the power of the piece is in the way everything comes together, making sense of all that came before in a powerful, deftly accomplished feat of theatrical magic.

Director Sarah Rasmussen is perhaps a little two careful, working hard to let each new revelation arise un-guessed-at, while it might have been more dramatically fluid to let the characters show the weight of the secrets they carry. Still, with loads of charm and a joyous embrace of what it's like to be young, self-absorbed and confidently clueless, MTC's I and You is a sweet and lovely thing, a tiny little play that, miraculously, contains multitudes.

Theater Marin Theatre Company Lauren Gunderson I and You