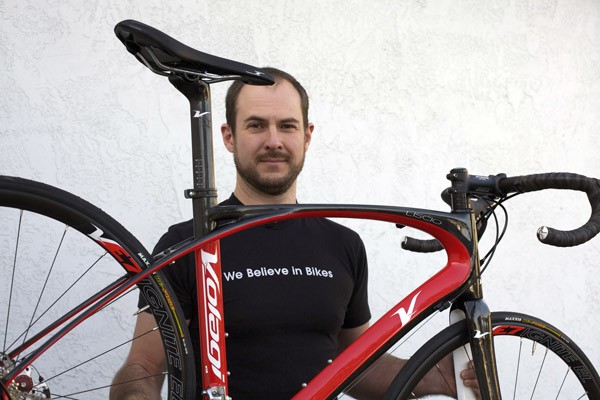 In a classic David vs. Goliath case that has the bicycling community abuzz, two owners of a small Cotati bike company are in a San Jose courtroom this week battling cycling giant Specialized.

At issue is a noncompete clause signed by Barley Forsman and Robert Choi when the two were hired at Specialized in 2008. Though they left Specialized in 2010, the lawsuit alleges the partners' new company, Volagi, represents a violation of that clause.

In a pre-trial brief, Specialized claims Forsman and Choi "stole its trade secrets" and started a competing company while employed with Specialized. Demands include but are not limited to damages, restitution of wages, ownership of Volagi's Longbow Flex technology patent, royalties for Volagi sales and $1.5 million in attorney's costs.

The brief also threatens a motion at trial excluding much of Volagi's defense, alleging that "defendants' arguments will only enflame and enrage a jury against defendants and make their bad situation even worse."

Volagi's own brief paints a sinister portrait of Specialized president and "notorious copycat" Mike Sinyard, and includes a lengthy declaration from another former Specialized employee regarding Sinyard's character and the company's "rip off, duplicate and sue" strategy. It asserts that Forsman and Choi conceived Volagi on their own time and developed their frame only after leaving Specialized, using no confidential information from the company. Neither Forsman nor Choi, it argues, worked in frame development at Specialized.

Forsman and Choi are currently under gag order by Specialized, and the "big S," as Specialized is known in the industry, declines to comment on any ongoing litigation. But the story has caught fire on sites like Bike Radar, VeloNews, Bike Rumor and CBS News, and according to many in the local cycling community, Specialized's fight against the Sonoma County startup is only generating ill will.

"It's ridiculous what Specialized is trying to do," says Jeremy Sycip of Santa Rosa–based Sycip Bikes. "This case has been going on for a long time, and initially, Specialized was going after them for other things."

Sycip, an expert frame builder who gave a deposition to Specialized's lawyers, notes that Specialized originally went after Volagi for calling their frame "Venga"; Specialized had a frame in development at the time called a "Venge." Volagi changed the name of their bike.

Then, Sycip says, Specialized claimed Volagi's frame looked like the Roubaix, a Specialized frame. Now, he notes, the case is based on the company's noncompete clause. "It kept on changing, which to me is ridiculous. Obviously, they were just trying to go after them and trying to buy time, basically, to put these guys out of business."

Sycip himself was issued a cease-and-desist from Specialized in the late 1990s, when he decided to name one of his frames a Pavé. Specialized had a seat post called a Pavé, and to avoid a lawsuit, Sycip dropped the name.

For years, Specialized has had a reputation for suing small bike companies, says Sean Walling, owner of Soulcraft Bikes in Petaluma. "You keep hearing the same stories over and over, and first you think, 'How could they be doing this?'" Walling says. "And then you hear it from enough people, and you think, 'Wow. They really are doing this.'"

Citing oftentimes questionable copyright claims, the company has repeatedly used its legal muscle against custom bike companies, Walling says, and is notorious for forcing independent dealers from carrying competing brands. "Especially people on the industry side of things, they've known what's been going on for a long time."

Support for the underdog has been strong. At the Trek Bicycle Store in Santa Rosa, which sells the Volagi, manager Andrew Nelson estimates that since the story broke, "We've had at least two go out every day in the last week. That's pretty high-volume for something like this." On Sunday, Trek had only one Volagi left in stock, priced at $3,595.

Nelson credits Specialized with development in the road-bike industry, but notes that "definitely you have the backlash, not just from vendors, but from people who are riding bikes, who are making buying decisions."

"I can see rooting for the underdog and encouraging small companies to build bikes," Keene says, "but in this particular case, to me, it's clear-cut. I think Specialized has every reason to do what they're doing."

Soulcraft's Walling says that even if Specialized wins its case, the breach of goodwill in the bike community represents a net loss.

"There are a lot of people who see the bike industry as somehow different from other industries that are more competitive," says Walling. "It's a family thing to them. Something like this sticks out for a lot of people."