'Edge of Tomorrow' mashes up 'Groundhog Day' and 'Starship Troopers' 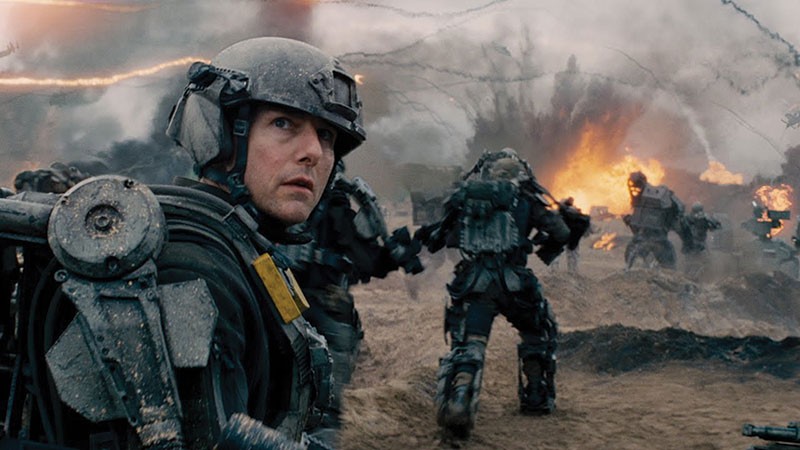 In Edge of Tomorrow, brass-hatted communications officer William Cage (Tom Cruise) stupidly angers his CO, Gen. Brigham (Brendan Gleeson), who is preparing D-Day II against Fortress Europe. The continent is occupied by alien "mimics"—giant Rastafarian wigs made out of barbed wire, spinning around at high speeds like a carnival eggbeater ride.

Busted down to private, Cruise is the new meat in a death sandwich, militarily exo-skeletoned but killed instantly on the Normandy beachhead. He comes back to life to relive the events, this time with some extra knowledge of how to survive. Shortly after a number of deaths, Cage meets Rita (Emily Blunt) a celebrity ace of the war, the so-called Angel of Verdun; that WWI battlefield was the site of a rare defeat for the frightwigs. Minimalist acting on Blunt's part; she emotes believable trauma, without being all that interesting.

Director Doug Liman's straightforward mashup of Groundhog Day and Starship Troopers, taken from a highly derivative Japanese novel, has one strong virtue: it's close to Harry Harrison's parody of Robert Heinlein, Bill, the Galactic Hero, complete with mean fellow soldiers, defective equipment and bloodthirsty sarges. (Bill Paxton, excellent, is set to take over any R. Lee Ermey parts.) Another virtue is the spirited finale in a post-apocalyptic Louvre—heads up Arc du Carrousel!

Early mysteries leads to cast-iron plot points, obvious solutions and the unlikely rational explanation for Cage's "slightly different day, same shit." Some find Groundhog Day deep, but there isn't delve-worthy material here. The tomorrow we can forecast is one where movies devolve into shooter games. Edge of Tomorrow's manifold deaths and reboots give that ominously huge gamer audience the pleasure they weren't getting in the cinema: the aspect of being able to reset and play again.

'Edge of Tomorrow' opens Friday, June 13, across the North Bay.