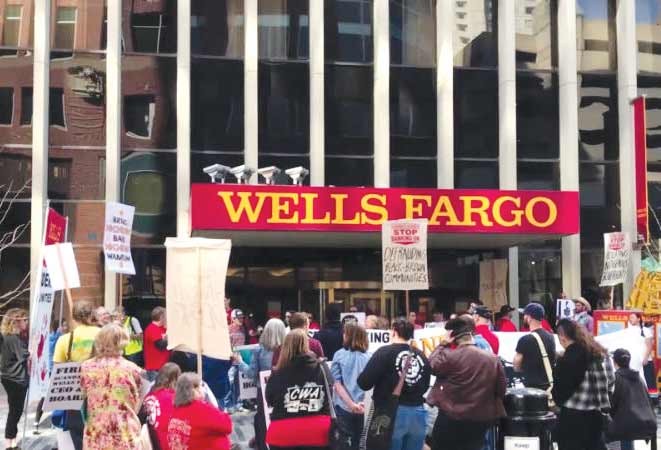 A difficult part of this quarantine stems from an essential loss of American identity: If you’re not working, and you can’t buy things, who are you?

“Your job is your life, here in the U.S.,” says Kilian Colin in season two’s first episode of Dirty Money (Netflix), “The Wagon Wheel.” He was one of the original whistleblowers in the Wells Fargo scandal concerning the “cross-selling” of phony accounts that led to then-CEO John Stumpf receiving a $17.5 million fine.

Fellow whistleblower Yesenia Guitron, of Napa County’s St. Helena branch, calculated that a bank with several tellers in a town of 5,000 would run out of citizens quickly. She was sent to recruit grape-pickers from the local labor exchange, her manager allegedly telling her to “unbutton your shirt and shake your skirt.”

Alex Gibney, the Oscar-winning director of Taxi to the Dark Side, co-produces the six-part series.

The story is deftly told. It explains a complicated grift with pointed visuals, a clip of “The Wells Fargo Wagon” number from The Music Man (1962), wrenching personal stories and an interview with The Wall Street Journal’s Emily Glazier, who wrote 250 articles about the bank. And Krauss gives Woody Guthrie the last word.

Another Dirty Money episode, “Slumlord Billionaire,” by Daniel DiMauro and Morgan Pehme, is about Jared Kushner, who came from a family of New Jersey developers and is now an adviser on numerous U.S. policies.

Jared’s Damien-like smoothness suited the equally kneecap-faced Ivanka Trump, and his fortunes have increased since their marriage. Still, his 666 5th Avenue building required investments from Russians and Persian Gulf potentates, creating a situation that looks awfully like influence-peddling.

Jared’s illegal business practices as a landlord are illustrated in stories about his New York City buildings, where he pressures rent-controlled tenants with horrible neglect and ’round-the-clock construction crews.

For some reason, Kushner refused interviews, and his underlings excuse what they did as “Fiduciary duty.” That’s today’s version of, “We were only following orders.”

‘Dirty Money’ is streaming on Netflix.