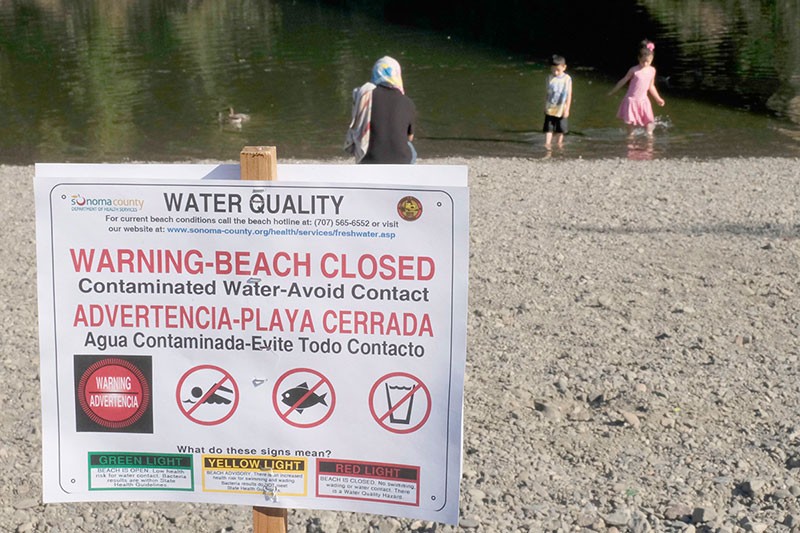 It's become part of summer along the Russian River: the weather warms up, and people flock to the water—only to be warned to stay away because of elevated levels of contamination.

Both bacterial counts indicate the presence of "fecal waste" in the water.

On Thursday, July 6—following some of the largest crowds ever recorded over the extended Independence Day weekend—the Environmental Health & Safety division of Sonoma County's Department of Health Services issued a press release saying that it had ordered staff to post "warning-closure signs" at Monte Rio advising the public against "swimming, wading or water contact."

"At significant levels, this bacteria could indicate that other disease-causing agents are present," the press release stated. "Additionally, these pathogens at certain levels can sicken swimmers and others who use the river."

None of the county's nine other public beaches on the river where weekly sampling occurs—from Cloverdale Park to Johnson Point—were closed. County officials had anticipated that the levels would diminish by the weekend, but follow-up tests indicated no such dissipation. As of Monday afternoon, Sonoma County health officer Karen Milman said that Big Rocky was still closed to swimmers.

"Additional test results are still elevated," Milman said, "so the current recommendations to stay out of the water are the same.

"We don't have a source identified," Milman added in a phone interview. "It's complicated, because there is elevated coliform, but the E. coli is going back down. We will update our website when test results come back later in the week."

Don McEnhill, executive director of Russian Riverkeeper, says the source of those high levels could come from a number of places.

"Livestock, such as cows, pigs, goats, that are frequently fenced so they have direct access to waterways, could be part of it," McEnhill speculates. "Dog waste from careless owners, leaking sewer-collection pipes, leaky or malfunctioning septic tanks, illegal dumping, unsanitary homeless camps—though we have more sanitary ones—birds, marine mammals and other wildlife and kids in diapers playing in water" can all contribute.

"Grab tests," such as those conducted by the county, McEnhill adds, "really don't give a very accurate reading on the state of the river. It's like shining a flashlight in a dark room for a few seconds where everything is moving. It doesn't provide sufficient detail for a full scientific assessment." A grab test comes from a single water sample.

On hearing that the numbers were still elevated, McEnhill noted that it would be hard "to pin the cause on high use" over the holiday. "It seems more consistent than that, so likely a discrete source like a leaking pipe or maybe all those folks jamming into Bohemian Grove and their beach camp area for [their] annual confab."

The Sonoma County Tourism website calls Big Rocky a "vacation wonderland," but the popular beach has been a less than idyllic spot in recent weeks—for reasons other than fecal pollution. During the last weekend in June, Sonoma County Sheriff's deputies broke up a gang-related brawl that left five people injured. Two arrests were made at the scene and others are pending.

In the summer of 2015 there was a large bloom of blue-green algae (cyanobacteria) at various places on the river that also presented environmental concerns. A dog was believed to have died because of the outbreak.

McEnhill, who has been actively engaged in the watershed since his childhood in the 1960s, is generally optimistic about the river's water quality. "For the amount of development and human activity," he says, "the Russian River is in fairly good shape, is safe for swimming 99 percent or more of the time and is much cleaner than 40 years ago, before the Clean Water Act regulations."

He adds that the county is doing a better job of protecting the river than in years past—especially with human waste.

"Helping our river stay clean is like keeping a kitchen clean—if you make a mess, clean it up. Half of dog owners go to the river without bags. Parents need to use waterproof diapers. And we still have a ways to go with agricultural and livestock contaminants.

"We can always do better."