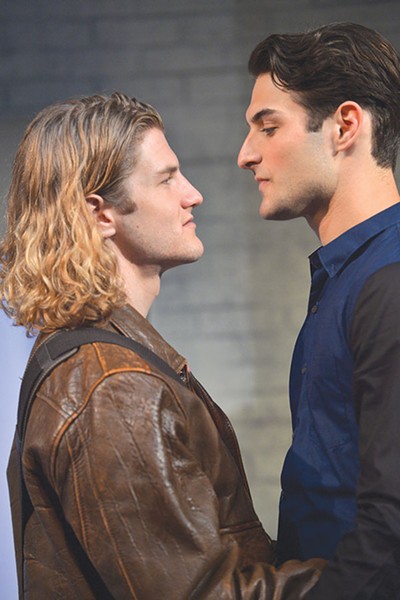 Santa Rosa's acclaimed Summer Repertory Theatre Festival (SRT) has returned for its 45th year. Primarily a training program, the festival draws young theater artists from all over the country for what is often their first taste of what it means to be a working actor.

Audiences have come to expect a comfortable assortment of classics and Broadway favorites. But because this is a program designed to push and challenge its artists, sometimes something really unusual, even a bit controversial, manages to sneak in.

This year, in addition to the cozy-cute Gershwin musical Nice Work If You Can Get It, the musty bedroom-farce Boeing Boeing, the rowdy heavy metal musical Rock of Ages and the Sondheim classic Merrily We Roll Along, Summer Rep is offering one of its edgiest shows ever, though you wouldn't know it from the way Douglas Carter Beane's Little Dog Laughed has been marketed. Hardly the light-hearted romp the festival's advertising suggests, this bold 2006 Hollywood satire brings a bit of welcome bite to a season mostly crammed with frothy crowd-pleasers.

The Little Dog Laughed is narrated by Diane, a hyper-driven Hollywood agent (Alexa Erbach, disappointingly off-key in a performance that is far too over-the-top). Her client is a closeted second-tier movie star, Mitchell (Justin Genna, the best thing about the show), who yearns to balance his professional ambitions with his need to find real human connection.

Early on, Mitchell drunkenly summons a scheming hustler, Alex (David Miller, a bit weak in a tough role, though impressively committed to it), whose primary clientele is wealthy men—though he assumes he's straight because he sometimes sleeps with his best friend Ellen (Makenzie Morgan Gomez, the next best thing about the production). All of this creates a problem for Diane, who might be able to turn Mitchell into a star—if she can only keep him in the closet.

The script is clever, packed with sharp observations and inventive dialogue. The direction by Travis Kendrick is focused and well paced, but too heavy-handed to let the humor breathe. The cast is certainly to be congratulated for its professionalism in handling the script's sexual content, suggested nudity and intimately close proximity to the audience. But this kind of writing requires a better balance of darkness and comedy. Perhaps, with a stronger cast and direction, the frank and confrontational outrageousness of Beane's socially biting storytelling might have been as funny as it is brutal, bleak and unforgiving.