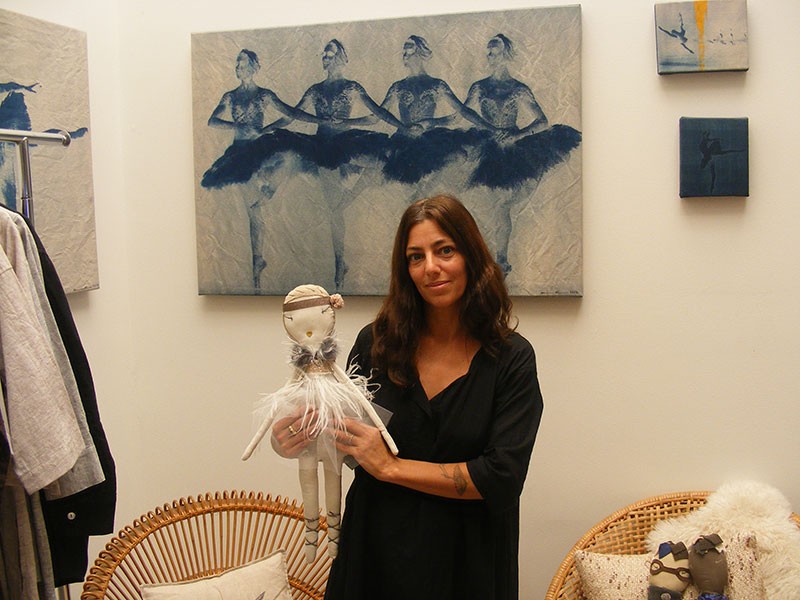 The internet can be regarded as a giant general store, ready to cater to our wildest desires.

But should you look for a handmade, designer rag doll for a girl who deplores anything pink, frilly or girly, Google will raise an eyebrow, and then give you Jess Brown, a Petaluma designer who pretty much dominates this niche category.

Brown's daughter Stella, now 17, was such a girl, drawn to gray and black and admiring Coco Chanel when she was all of three years old. To accommodate her daughter's taste, Brown, then a preschool teacher, took to designing and creating rag dolls, with a twist: she made them lanky and elegant, and equipped each with a stylish outfit.

Fast forward to 2015, and the dolls are an international sensation. Brown ships to Dubai and London, and even collaborates with couture fashion labels.

"I wanted my daughter to have everything handmade, and there was nothing sophisticated for kids," says Brown in her Petaluma Mill studio. "I wanted a doll she could play with, but made out of beautiful materials. She would come antiquing with me, and we'd find vintage fabrics and design the doll's clothes."

Ten years ago, Brown helped open Mod, a children's clothing store in Petaluma, where the dolls made their debut. The pattern came together after a challenging process. Manufacturers told Brown the skinny, fragile hands and legs will be difficult to stuff and sew. The face was even tougher.

"I wanted the eyes to twinkle, and the mouth took forever," Brown recalls. "A smile didn't work, the color [of the lips] couldn't be red or pink."

The result is a sophisticated, almost enigmatic look on the doll's face that appears friendly from one angle and nonchalant from another.

In her studio, dolls in feathers, printed dresses and dainty headpieces share space with an all-female staff of five. "We've established a pretty good fan base," says Brown. "Our clients are anyone from a brand-new baby to 80-year-old women, and pretty sophisticated shoppers who appreciates craftsmanship and are interested in design."

About half of the dolls are sold for children's playthings and the rest become stylish home accessories, she says. The prices range from $100 to $234.

The fashion element is strongly present in Brown's work. Like a designer, she issues four collections a year: spring and fall for smaller dolls; holiday and summer for larger ones. Each collection has a clothing theme, a hairpiece style and a color scheme.

During New York's Fashion Week in 2012, Brown collaborated with the Italian fashion powerhouse Bottega Venetta to create life-sized dolls that appeared in the windows of the brand's flagship stores in Milan and Paris. This month, she'll collaborate with the San Francisco children's boutique Peek Kids on a series of limited-edition dolls dressed in outfits matching pieces from the kids' collection.

Devoted customers had joked that they would wear the tiny clothes if they could, so three years ago, with no formal education in fashion design, Brown started making women's clothes. With nothing more than a good eye and the help of a pattern maker, she was motivated to recreate some of the pieces in her antique clothes collection. Unlike some of the more elaborate dolls, the dresses and blouses are reserved and muted, created from gray and beige linens and wools, with rare explosions of fuchsia. Often, Brown uses scraps from the women's garments to make the dolls' tiny jackets and skirts.

While her clothes are sold in a small number of boutiques across the country, the dolls have sold worldwide: Australia, China, Japan and numerous European countries. But Brown is perfectly content with basing herself in Petaluma.

"It's a very exciting time to be a business owner in this town," she says. "When I opened a sophisticated baby store 10 years ago, people were surprised, but stores started opening with that same level of curation and passion."

When asked about the tempting fashion scene of New York, where Brown lived until she was 11, she claims New York often comes to Petaluma.

"People from New York or even Europe design their vacations around Petaluma," Brown says. "In New York, you're a needle in a haystack, but here, people are seeking you out."