Despite Tuskegee heroism, 'Red Tails' is a historic bust 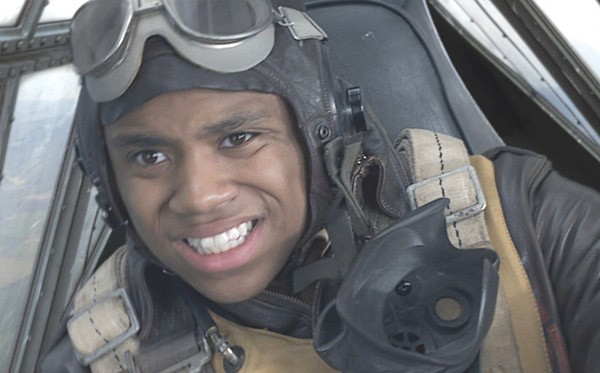 The heroism of the Tuskegee Airmen will never be forgotten. Red Tails, however . . . forget about it. Executive producer George Lucas once stitched in excerpts of WWII movie dogfight footage to let the studio know what he had in mind for the battle sequences in Star Wars. Red Tails seems to have re-woven all those snippets together.

Red Tails follows the history of the African-American 332nd Fighter Group, stationed in Italy in the last two years of the war. In charge is Col. Bullard (Terrence Howard), who urges the War Department to give his men a chance to perform in combat. His assistant is the thoughtful Maj. Stance (Cuba Gooding Jr.).

As per Top Gun, everyone has one well-defined problem. Director Anthony Hemingway disinters every pre–Catch-22 devil-dogs-of-the-air nugget of dialogue ever written. "How do you like that, Mr. Hitler?" says one ace, after shooting down a plane. A scar-faced German called "Pretty Boy" (Lars van Riesen) attacks in a Messerschmitt 262 jet fighter, shouting "Die, you foolish African!" This pumped-up late-show offering has a few vintage planes, mostly CGI fighters rolling in a spotless, synthetic white sky. And there's not much more of the unexpected in the tender courtship between an Italian girl (Daniela Ruah from CSI: Los Angeles) and the hotshot "Lightning" Little (David Oyelowo).

Lastly comes the point: "We are on the side of God almighty," says an officer, and the screen goes wall-to-wall full of American flag. It's hoped patriotism will make us turn a blind eye to the weary falseness of Red Tails. But it's not WWII anymore—a film could tell the truth about the bitterness and pain of it, and explain the backgrounds of the soldiers and the depth of segregation in America, all without encouraging the Axis.