Down to the Bone

It's wintertime, a bull market for bone stock 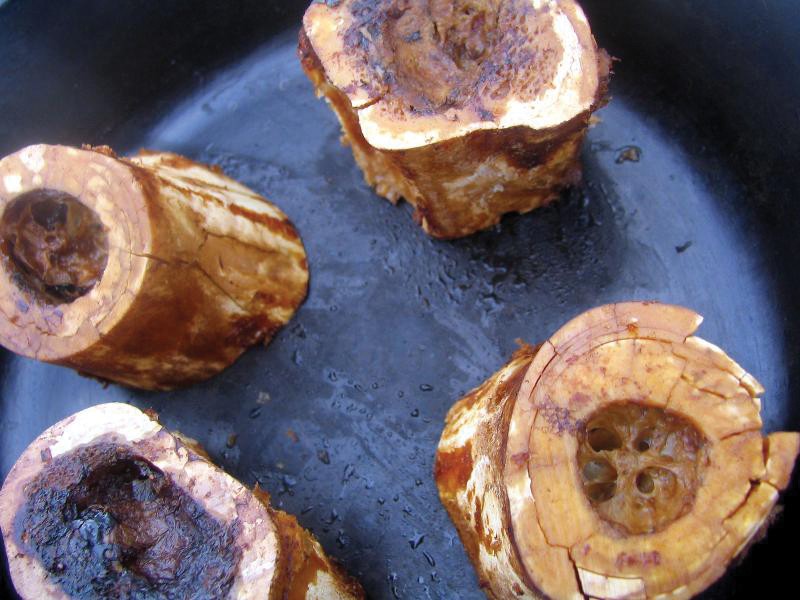 The expression "stocking up" refers to the many acts of gathering and processing food, usually in preparation for winter. Chopping chutney, canning pickles, freezer-bagging meat and simmering a pot of sauce are at the core of a lifestyle that a friend calls "Third World, first-class." And stock, the noun, is an essential ingredient in my Third World, first-class kitchen.

One of the more noteworthy nonsoupy applications of stock is in the making of espagnole sauce, one of the five "mother sauces" of classic French cooking. Espagnole sauce can be mixed with yet more stock and reduced by half to make demi-glace, a rich, flavorful and altogether labor-intensive sauce that is itself the base for many other sauces. Demi-glace is the most valued ingredient in many a chef's kitchen, and is frequently compared to gold.

For all the prestigious places it goes, a good stock can be made from ingredients that a wino could find in a dumpster, like bones, fish heads, chicken backs and vegetable scraps. Made from mammal bones, it's called "brown stock," which is what goes into demi-glace.

Long bones, i.e., the animal's front and rear leg bones, work best, as that's where the most marrow is. To allow the marrow to melt into the stock, the bones need to be opened. Purchased bones usually come pre-cut. If you're processing meat at home, a bone saw really helps. Or do like me: wrap bones in a towel and smash them with a cast-iron skillet on the sidewalk. But that comes later.

I begin by placing the bones on a pan in the oven at 350 degrees for about an hour, stirring occasionally so they're golden brown all the way around but not burned. Twenty minutes before you're done browning the bones, remove them from the oven and allow them to cool to the point where you can comfortably rub the bones with tomato paste (I use homemade ketchup). Roast for another 20 minutes, checking often to make sure the tomato paste doesn't burn.

Remove the bones from the roasting pan. Now is the time to smash them with that frying pan or hammer. Place the broken, browned bones in a large empty pot along with the roasting pan drippings. Put the pan on the stove over medium heat and deglaze with wine or water, gently scraping the bits of goodness stuck to the bottom of the pan—assuming said fond is not burned. Pour the deglazed pan contents into the stock pot.

Add a bay leaf and a few peppercorns, and cover everything with water. Cook very slowly, at your stovetop's lowest setting, for 12 to 24 hours, maintaining full coverage of water over the bones. You don't want the stock to boil; try to keep the pot at the "lazy bubble" stage.

Let the stock cool to room temperature and then put it in the fridge overnight. By morning, the fat will be floating on top in a solid raft that you can easily remove.

Reheat the stock back to the lazy bubble. While it's heating, prepare a mixture of equal parts celery, carrot and onion. Add this mirepoix to the stock and cook for three more hours of lazy bubble. Strain the bones and mirepoix, and freeze or refrigerate your stock.

And as the mercury drops, your stock's value will go through the roof. In the Third World, first-class lifestyle, bone stock is a valuable asset, already liquid.