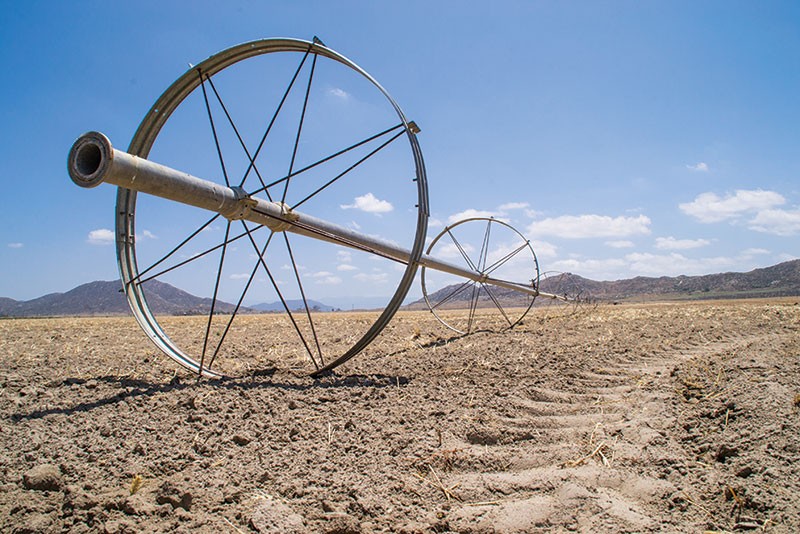 For the first time in 15 years, all of the Golden State suffers from a water shortage, and while that's very bad for the region, it may also send food prices skyrocketing throughout the country.

An April study from Arizona State University said the price of lettuce could jump by as much as 34 percent; the price of a single avocado is estimated to rise by some 28 percent, to $1.60.

Gov. Jerry Brown declared a state of emergency in January when it became clear that 2013 closed out the driest year ever for many parts of the state.

The U.S. Drought Monitor, a weekly map of drought conditions produced jointly by the National Oceanic and Atmospheric Administration, Department of Agriculture and the National Drought Mitigation Center at the University of Nebraska-Lincoln, says that the entire state suffers from conditions ranging from "abnormally dry" to "exceptional drought." The heavy-population centers all suffer from "extreme drought" or "exceptional drought."

The drought is hitting the farm industry. Fresno County, the No. 1 farming county in the nation, may lose up to a quarter of its orchards and fields this year for lack of water. The UC Davis study estimated 14,500 Central Valley farm jobs would be lost to the drought.

The state's farmers will leave about 800,000 acres idle this year, according to estimates by the California Farm Water Coalition, which will negatively impact the state's entire economy. As a result, consumers can expect to pay more at the grocery store for a range of staple foods.

Richards notes in a statement that between 10 and 20 percent of some crops will be lost to the drought—and that California produces the highest yield of the crops most at risk, especially avocados.

The Arizona study has gotten some pushback from local ag experts, as it highlighted an expected jump in grape prices of up to 50 cents a pound.

Grocers will typically try to replace California produce with other sources in a pinch, which makes it "hard to really determine the extent to which consumer pricing is affected because of a drought," says Sandy Elles, executive director of the Napa County Farm Bureau.

Elles adds that Napa wine grapes got a "very lucky reprieve with the late seasonal rains" this year.

This story was sourced from Alternet, with additional reporting by Tom Gogola.