You can purchase Wise Acre eggs at 631 Arata Lane in Windsor. 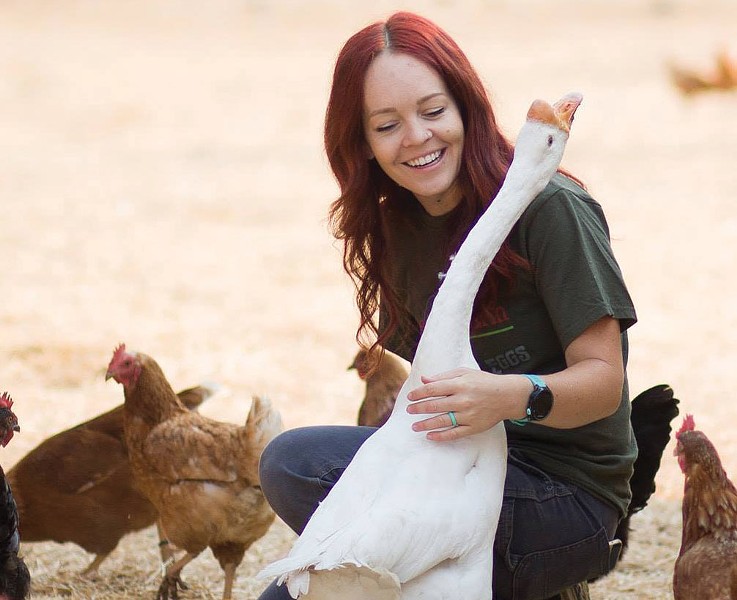 The North Bay has long centered its identity around its agriculture and food. Latest on the menu? Designer eggs, courtesy of Wise Acre Farm in Windsor.

"Designer eggs, that's my thing," says owner Tiffany Holbrook, "It's food from a source where the animals are truly cared for."

Holbrook, a vegetarian, is open about the age when hens are culled—two years for heritage breeds; 18 months for hybrid-laying breeds. "I refer to myself as a vegetarian butcher. I do the slaughters on the farm myself."

A vegetarian since she was a kid, Holbrook doesn't like the thought of eating an animal. The slaughter of old hens, however, is an unavoidable aspect of poultry farming. As a responsible, humane farmer, she feels she must do it herself to honor the lives of the hens.

When it comes to the debate about whether eating vegan or omnivorously is best for the planet, however, Holbrook wishes people would focus more on where the food is coming from and less on what it is. Environmental sustainability is a priority at Wise Acre. She practices regenerative agriculture and works with markets nearby.

What's good for the animals is good for the earth. At Wise Acre, hens range freely and Holbrook moves the coops often to avoid overloading carbon, aka manure. This also lets the chickens eat fresh grass and insects. Holbrook, who leases the farm, says the landlord told her the pastures are the healthiest they've been in the last century. "We need livestock moving through fields to heal the planet," says Holbrook.

Treating the hens as animals instead of machines is costly. Letting the hens range outside, Holbrook says, makes them prone to predator attacks and parasites, and she accrues expenses conventional egg farms avoid by confining their chickens.

Holbrook is actively trying to lower the costs for her customers. It costs $126 per day to feed her 1,600 laying hens and 250 chicks. A dozen eggs range from $4.50 to $10, depending on size. To cut down on feed expenses, Holbrook started growing barley with hydroponics—half as expensive as the local, package-free grain the hens eat. She also hopes to start an insect farm, using manure to amend the nutritional deficiencies of barley for the hens.

As a former elementary school teacher, Holbrook is new to professional farming. She dove in a year or so ago after seeing Wise Acre was for sale. Holbrook's proud to be part of a nationwide wave of women taking the reigns on farms, mentioning that since she's taken over she's learned to operate heavy machinery and weld. "I hold my head high."

"What's amazing about Windsor is how this farm is so heavily supported," Holbrook says. Residents come straight to the farm to buy eggs from Wise Acre's signature egg vending machine. Off the farm, Windsor's BurtoNZ Bakery uses Wise Acre's eggs exclusively. "It's why they're the best quiches in town."

It's clear that Holbrook knows the hens intimately. Star loves water and likes hoses. Then there's Brittany, who decided to live with the goats for a few weeks

"You have a doctor, you should have a farmer, too."