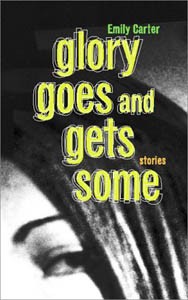 LIFE, as no less a philosopher than Pauly Shore once observed, is like a box of needles. It's full of little pricks. Unfortunately for Glory B., the heroin-using heroine of Glory Goes and Gets Some, one of those little pricks--either a hypodermic needle or a penis; she's not sure which--packed an extra-special punch. Before it slid back out of her body, it flooded her bloodstream with the AIDS virus.

On the one hand, Glory Goes and Gets Some (Coffee House Press; $20.95) is a collection of 21 interlinked tales about (and almost all narrated by) a sardonic New York hipster going through her own private apocalypse. Imagine the worst thing that could happen, and it might look like what happens to Glory: she becomes a drug addict, she becomes a prostitute, she becomes infected with HIV.

After things can't get any worse, she somehow frees herself from the dope and the booze and the habit of trading her body for dope and booze. Exiled from the streets of Manhattan, Glory winds up in Minnesota, emerging from a rehab center to lead a semi-normal life. Only she's not normal at all.

But, on the other hand, Glory Goes and Get Some is less about sex and drugs and the search for redemption than it is about words--about what they can do in the extraordinarily talented hands of author Emily Carter.

The magic starts with the very first sentence of the opening tale, "East on Houston," a prologue of sorts: "There was this one summer that began in June and ended quite some time later, when I could hear the voices of men in traffic, while I was walking east on Houston. They honked and squealed, barked, drawled, groaned, purred, hissed, whispered, and raggedly begged at me as I twitched down the street in a borrowed dress that was as red as the stoplights, the stoplights gleaming in the black air like costume jewelry from a sunken Spanish galleon, gleaming from the bottom of the sea: the night on Houston like a black tropical shipwreck ocean, fathoms deep and full of trinkets for a young girl like yours-ever-true."

After enduring a slew of unsuitable suitors and fighting hard against her own self-destructive impulses, she finds the right guy: "Apparently the man in question feels the same, because after our second night together, he told me he had never thought this was going to be a part of his life again, and he'd answered my ad out of sheer desperation, which, out of all human motivations, is, in my opinion, the only one you can absolutely trust."

The dust jacket on Glory features a laudatory quote from Erica Jong describing the author's voice as "sassy." Sassy? That's the name of a now defunct magazine that existed to sell makeup and panty liners to teenage girls. There's a better word to describe Glory Goes and Gets Some: masterpiece.

From the November 2-8, 2000 issue of the Northern California Bohemian.