Trebuchet open up on new album 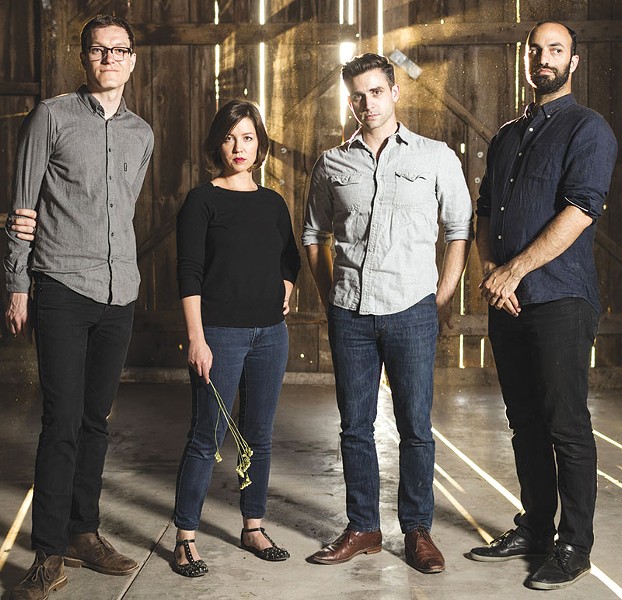 In the four years since Petaluma indie-rock quartet Trebuchet released their debut album, much has changed. Woes and victories, both personal and collective, inspired an expanded, heart-on-the-sleeve sound that marks the band's excellent sophomore album, Volte-Face, available on vinyl, CD and digitally on April 14.

The four-piece outfit is made up of guitarist and lyricist Eliott Whitehurst, bassist Navid Manoochehri and husband-and-wife drummer and keyboardist Paul and Lauren Haile. Friends since meeting at Sonoma State University in 2006, the band members have an intuitive musical chemistry that's matched by their most honest and personal songwriting yet on the new album.

"We write the music all together," Whitehurst says. "It's really collaborative to the point of working on melodies and harmonies before there are lyrics."

An added bonus to that is that Paul Haile and Manoochehri operate Greenhouse Recording in Petaluma, and Volte-Face is one of the most professional sounding records to come out of Sonoma County in the last year. Layers of synth and vocal harmonies dance around the acoustic guitars, and shimmering cymbal crashes amplify the album's heaviest moments.

Once the music is in place, Whitehurst pens lyrics to match to mood of the song.

Thematically, Whitehurst says, the content of the new record was tough to deliver. "Lyrically, I've always been someone who wanted to delve into really difficult subjects," he says, "but for every song there was always a breaking point. Like, if I put down this lyric, that's painful and I'm going to have to revisit it a lot, so with everything before, I had an out to make the song about something else."

On Volte-Face, Whitehurst avoided the outs and stayed true to sharing his personal struggles in an authentic way. The album's title, French for "about face," and the overarching mood of the record, is a reflection of the songwriter's recent tumultuous past, which included a called-off marriage engagement.

"Mentally, I had kind of checked out of my life," he says. "I was trying to be OK with the fact that what my life had become was not what I wanted it to be."

Through the turmoil and the heartache, Whitehurst was able to diverge onto a new life path and the new album, while vulnerable in its tone, is also a cathartic experience. "It was very difficult, but from that point on my life became what I wanted it to be," says Whitehurst. "I had control of my life again."