Pair of West County brothers head the vanguard of alt-snacks 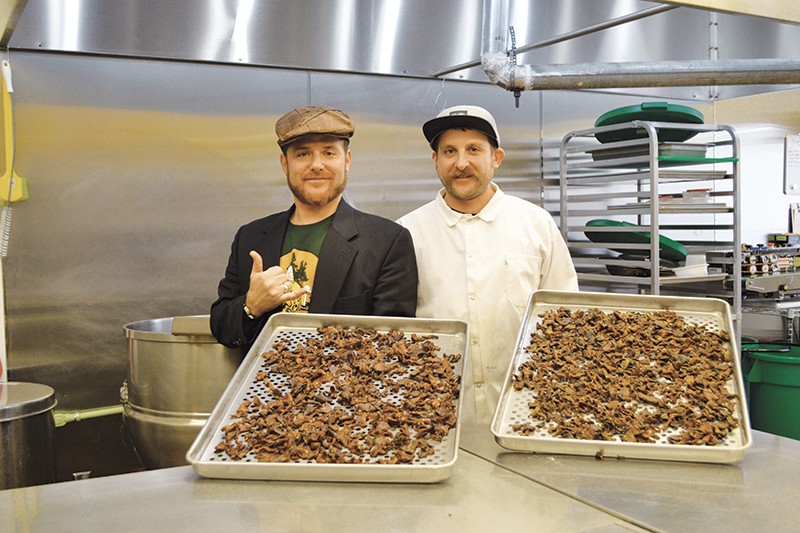 Sprouting up like mushrooms after rain, frozen yogurt shops seem to have taken over every shopping mall nook and retail strip cranny in 21st-century America, including a quiet little corner on the western edge of Sebastopol, Calif.

So it is a morsel of tasty, and, indeed, somewhat more savory, irony to learn that a failed fro-yo shop has been improbably replaced with a mushroom shop. Or is that "mushroom shoppe"?

The unfortunate venture might have done better than to open in November, speculates Wyatt Bryson, co-proprietor of Jewels of the Forest, the mushroom shop that popped up in its place. But it was fine timing for a business whose principal product crops out of the ground after a late fall rain.

The tiny retail space, which seems to have an air of things fungal about it—in a good, antiquarian sort of way—is dedicated to all things mycological, albeit in a limited and eclectic selection. Here are books, T-shirts, shroom-related baubles, edible items and even some disarmingly Old World–style hats and handbags that are hand-made from a kind of velvety-smooth mushroom by a craftsman in Romania, and wouldn't look out of place on Radagast the Brown. Wyatt swears the hat won't melt, like a mushroom, under the next rain it meets.

Pointing to a colorful sign at the back of the shop, Wyatt explains that the Jewels of the Forest logo—a grayscale assembly of a mushroom with a forested background—was adapted from the sign for a video store his father operated in Occidental, where the family has a multi-generational history.

But is there more to it than a quirky little homespun mushroom shoppe? Back to those edible options mentioned above: the real business of Jewels of the Forest happens beyond the swinging doors to the commercial kitchen where, thanks in part to the yogurt setup (plus $50,000 in extra renovations), Wyatt's brother, Hunter, is cooking up a new batch of mushroom jerky, and Wyatt starts talking about the hard-nosed world of snack-food entrepreneurship.

These are hard times no more for vegans who love the taste of jerky but cannot abide texturized soy protein versions of meatless pretenders to the cured-meat category. Mushroom jerky is trending lately, as are all things mycelial, according to Wyatt. He got bit by the shroom bug eight years back while working in shipping logistics in Hawaii (he retains a habit of greeting emails with "aloha"), when he bought some used lab equipment off craigslist and began growing oyster mushrooms.

I'd never heard of this fashion of toadstool treat until I happened upon a booth they'd set up on a quiet backwater of last year's Taste of Sonoma wine event at the Green Music Center. I was skeptical, maybe because of the bad reputation of the kind of dried mushrooms that are endured with a hearty slug of red wine, as a foul tasting means to a mind-altering end—or so I've been told.

But Jewels of the Forest mushroom jerky, which the Bryson brothers have named "Shroom Snack" in hopes of adding products, is steeped with spice and savory flavors—even though the organically grown oyster mushrooms do arrive in dried condition, from suppliers in Asia. The retail price, $8.99 for a 2.5-ounce packet, would be twice that if they sourced locally grown mushrooms, according to Wyatt.

After the mushroom pieces are rehydrated, washed, cut and sorted by Hunter, who has worked for Stark's restaurants for eight years, they are fresh-looking enough, shining with juicy vitality. The mushrooms are cooked, principally for food safety and because raw mushrooms contain a hard-to-digest substance called chitin; treated to sesame or sweet chili seasoning (they make a black pepper version exclusively for HenHouse Brewing's taproom) with tamari sauce and organic cane sugar; and then put in the dehydrator. That's the part that takes "some finesse," says Wyatt, to get just the right texture—Shroom Snack mushroom jerky is gummy, and sticks to the teeth like very moist beef jerky, but the seasoning doesn't stick to the fingers.

The snack was a hit at its debut a few years ago at a West County ethnobotany festival, selling out within an hour or so. "That was really our proof of concept and validating moment," says Wyatt. To prepare for their next move, they've already attended a New York scale-up accelerator workshop, had "speed dating" sessions with venture capitalists, and are talking level one (or is it round two?) financing—it's all a fast-moving blur in the reporter's notebook.

They're also a few steps ahead on that old homemade logo: soon, new packaging will emphasize the spinoff-savvy Shroom Snack brand, and shrink the Jewels of the Forest logo, which they hope to keep after any potential multimillion dollar sellout, for their mycological education efforts. The Bryson brothers present beginner courses on growing mushrooms several times a year at Santa Rosa's Finley Center. Participants get to bring home a bag of sawdust medium that will grow oyster mushrooms. The brothers have also worked with landscapers to create mushroom landscape designs.

Alas, there is no sweet scoops of frozen mushroom dessert in the pipeline yet, but who knows what will trend next: fro-oy?