Curating mountain biking's roots in the place where it all began 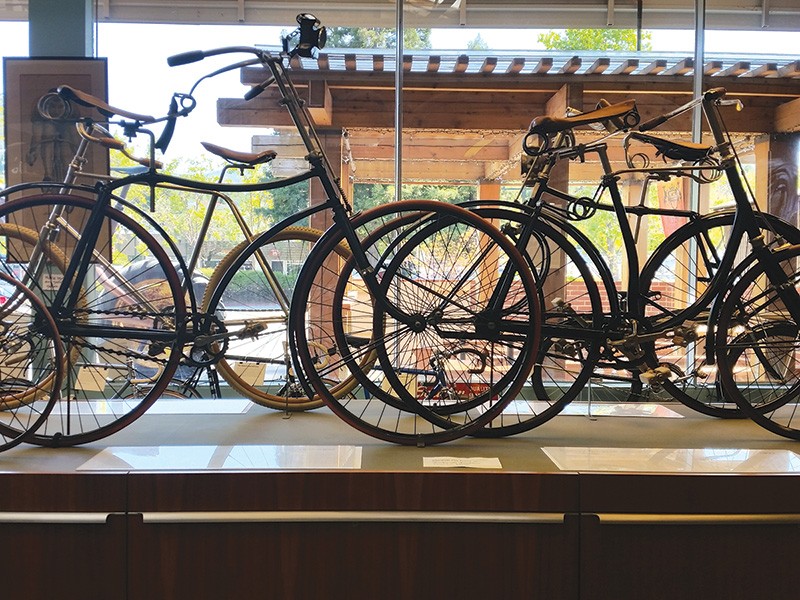 Bicycles predate paved roads, so in a way, mountain biking has always existed.

Yet Marin County is considered the birthplace of the sport, because in the 1970s local riders organized the first mountain bike race on Mt. Tamalpais, the Repack, and designed bikes that would set the path for modern bike design. The four-week-old Marin Museum of Bicycling and Mountain Bike Hall of Fame offers tribute to that history, and to bicycles in general.

"There was only one place where that activity reached a critical mass," says Connie Breeze, curator of the museum along with her husband, Joe, a Hall of Fame inductee and mountain biking pioneer. Joe Breeze also serves on the museum's board.

Joe Breeze and fellow pillar of the sport Charlie Kelly helped organize the first Repack race in 1976, a downhill trail on Pine Mountain that Breeze went on to win 10 times. He also welded the first ever mountain bike from new parts, dubbed it the "Breezer," and won Repack on it the next year.

"This was our off-season fun, exploring the territory we grew up hiking around," says Joe Breeze, at the time a road racer.

Breezer No. 1, the first bike he made, is in the Smithsonian museum; Breezer No. 2 is on display at the Marin museum. The museum plans on more exhibits, but if Joe Breeze is around, be sure to listen to his stories and check out the Mountain Bike Hall of Fame to read about his achievements in the sport, because he will humbly downplay them on his walk around the museum.

From retrofitted 1940s Schwinn clunkers to sleek, $10,000 carbon fiber bikes with finely tuned suspension, the history of cycling is told through the bikes themselves. To complete the story, a separate exhibit features a rare collection of 19th-century bikes, including the Victorian classic with the giant front tire and another model, with a chainless, shaft-drive design.

All of the bikes in this exhibit are on long-term loan from David Igler, son of prolific bike collector Ralph Igler, whom Joe Breeze met in 1975.

"We were able to cherry-pick to show the stepping stones in the evolution," says Joe Breeze. "These are really hard to come by."

The first bike in the exhibit is a French model from 1868 made of forged iron. It's also the first bicycle with pedals and the first to be commercially produced. The tires look like wagon wheels, yet the design is modern compared to some of the comical and creative design that followed in the next 10 years.

In 1890, the addition of rubber tires and a chain made riding safer and more efficient, ushering in a decade known as cycling's golden age. In the 1890s, there were two patent offices in the United States, one for bicycle inventions, one for all other inventions.

Many companies that made bikes in the late 1800s went on to make cars and car parts. "Cycling paved the way for the automobile— literally paved the way," says Joe Breeze, explaining how roads were initially paved for cyclists, not cars. (The museum recently hosted a lecture by Carlton Reid, author of Roads Were Not Built for Cars.)

The Marin Museum of Bicycling has been in the works for years. Though organizers are still seeking a major donor, the museum opened thanks to volunteer and community support. There are no paid employees. Joe Breeze estimates he's put in around 2,000 hours of unpaid work on the museum.

To raise money, the museum sells bricks that range from $250 for a 4-by-8-inch brick to $1,000 for a 1-foot-square brick. The bricks form part of a wall in the shape of Mount Tamalpais in front of the museum—the mountain where it all began.