Ana Popovic brings the blues to Guerneville via Serbia 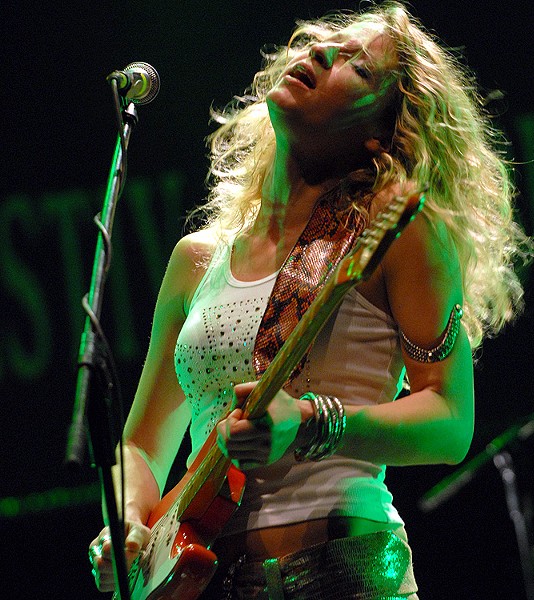 Writer Thomas Wolfe once said you can't go home again, but you won't convince blues guitarist and vocalist Ana Popovic of that.

Popovic, a headliner at this year's Russian River Blues Festival on Sept. 21, left her native Serbia for Holland in 1998, just before war and terror became the norm. Though she managed to avoid the fighting, she wasn't allowed to come back during that period, even to see her family. In 2010, she performed for 75,000 people, the largest turnout ever in Belgrade.

Popovic, who has garnered five Blues Music Award nominations, returns to the Russian River Jazz & Blues Festival after a smashing 2011 performance, with a whole new show, backed by her band, that includes Hammond organ, bass and drums. The new set will focus on her latest release, Can You Stand the Heat? which she describes by phone from her Memphis home as a tribute to deceased blues masters Albert King and Albert Collins.

"I thought they were missing on the blues scene nowadays," she says. "The album is old-school blues and funk, something different for me, and a challenge in terms of writing for a modern audience, without having the personal experiences those artists had. It's much easier to write a pop song than to write a good blues song."

The 38-year-old says she grew up listening to American blues. She formed her first band, Hush, as a teenager in Belgrade, playing the music of Albert King, Roy Rogers, Sonny Landreth and Jimi Hendrix. She's been part of the Experience Hendrix tour for 12 years.

"I thought I was born to do that tour," she says. "It's real to be there, and a huge honor. For me, it's only Jimi and Dylan as far as that kind of songwriting goes."

When she came to America 10 years ago, Popovic found it challenging being a female guitarist from Serbia, playing the blues. "I didn't want to give up what's special and different about me," she says. "It's very important for women to stand up for what they do."

The other side of her life is her two children, a son born in 2008 and a daughter in 2012. She brought them on tours shortly after they were born, breastfeeding them backstage between sets.

"They absolutely were rock 'n' roll babies," she says. "Here's thumbs up for all the mothers with careers."

Now, with the invaluable help of her husband, she confines her music to weekends, avoiding traveling with the kids. "It's a lot of juggling. During the week, I'm a mommy, leading a kind of double-life, which I love as much as being on the road. I've become more serious, and a better musician, after the kids were born."

While living in Holland, the war in her homeland was very hard to watch, Popovic says. "What kept me going was my passion and love for music. When I'm onstage, I'm very concentrated on the band and the groove. I'm searching for that specific moment when nothing comes between me and my instrument."