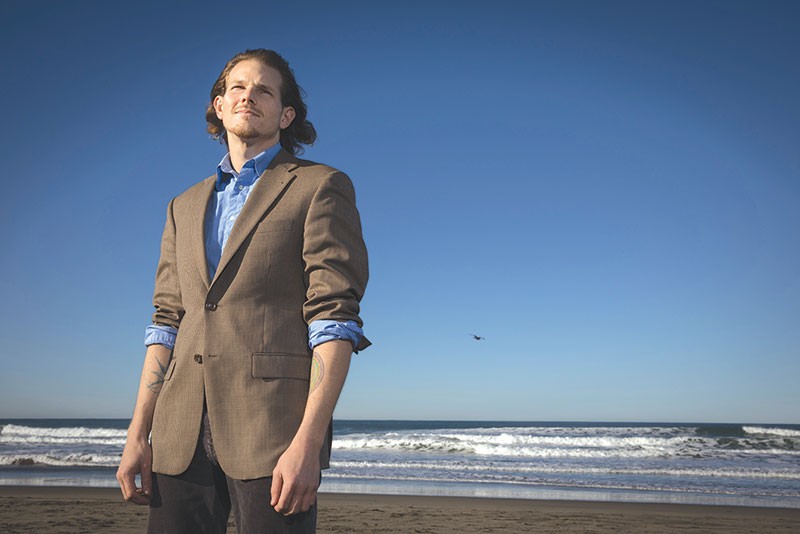 North Bay voters may wake up on Nov. 7 to the news that there are two progressives representing the region in Congress—and one of them is a bona fide Berniecrat.

Palsson, 32, is a working dad who works for Transition US, a environmental nonprofit, and was a delegate for the Vermont senator in the 2016 Democratic primary. The Santa Rosa resident is running as an Independent this year. It's his second run for the seat, which Thompson has held since 1999.

Palsson ran in 2016 and came in third behind Thompson and Republican Carlos Santamaria in the primary that year, earning 23,639 votes to Thompson's 124,634. The pro-gun Thompson went on to handily dispatch Santamaria by a margin of 3–1 in the general election. His district includes Santa Rosa, Napa County and parts of Contra Costa and Solano counties.

But there's no Republican in the race for the 5th this year, and Palsson believes he's got a real shot at taking down Thompson from the left.

In a recent campaign e-blast, Palsson flatly declared, "I'm running for congress against the infamous Zodiac Killer." What?

The jibe played off the difficulty in defeating a popular and long-standing incumbent. An editorial that ran in the Sonoma Press-Index in 2016 noted that "for Thompson to lose, something extraordinary would have to happen, like he were revealed to be the never-captured Zodiac Killer from the 1970s."

Two years later, the Zodiac Killer has still not been caught, and Palsson's having some fun with it. He goes on to immediately say he's joking but that the point he's making is a real one: the 67-year-old Thompson represents a retrograde Democratic Party that's overly obedient to the demands of the centrist Democratic Congressional Campaign Committee.

"Let me make it abundantly clear," Palsson goes on to write. "Mike Thompson is not the Zodiac Killer. But there is a hidden truth that, if revealed, might have roughly the same effect on local voters as if he were to be revealed as the notorious murderer of yore."

The point about Thompson, he says, is that he represents the worst of the worst when it comes to the constellation of his contributor base.

"The fact is that Thompson has accepted an alarming number of huge political contributions from lobbyists representing some of the world's most destructive corporations," he writes, "including Walmart, Verizon, Comcast, Bank of America, fossil-fuel companies like Tesoro, weapons manufacturers like Lockheed Martin, Raytheon and Honeywell, and a staggering litany of Wall Street entities, big banks, global accounting firms, Big Pharma and health-insurance goliaths, big agriculture groups and telecom giants—not to mention the to-be-expected donations from big alcohol, the powerful wine industry and wealthy real estate developers."

The other North Bay congressman, Jared Huffman is, for all intents and purposes, running unopposed this year, so nobody has compared him to the outlaw D. B. Cooper, despite the resemblance between the men.

While he's more aligned with Huffman than Thompson, Palsson doesn't expect the popular North Coast progressive to hit the hustings with him this year, let alone offer an endorsement. "I haven't approached Huffman," Palsson says. "It is politically dangerous for him to support anyone outside the Democratic establishment."

Speaking of, Palsson says that while he's obviously no fan of the bigotry that defined the Trump campaign, he does see in his election the emergence of a populism that's keyed in on a moneyball system that's rigged against We the People.

He says he wants to continue a populist push to get the money out of politics—but concedes with a laugh that when it comes to the president, money now appears to be winding up in Donald Trump's swampy pockets.

Still, he says the outsider opportunity that Trump represents is something any candidate might look to for inspiration.

"A dark horse could win," he says. "Enough people could say, 'eff this' when it comes to climate change, the threat of nuclear war and other raging existential dilemmas of our time, and give Thompson the boot."

Palsson is intent on pushing a people-first agenda, he says, that's focused on wage equity and Medicare for all, dealing with the student debt crisis and pushing for higher wages. All very Bernie.

He's also weighing in on gun violence as part of his pitch to voters and says Thompson has come up short on that front, despite his prominence on the issue among Democrats. Thompson was named by House Speaker Nancy Pelosi several years ago to head up a gun-violence committee on behalf of congressional Democrats. Since that time, Thompson has held lots of meetings and dutifully called for expanded background checks, but has opposed any attempt to limit civilian access to high-capacity rifles such as the AR-15.

"I haven't seen visionary leadership from him on any issue," says Palsson, "including the gun thing."

Palsson adds that he isn't aligned with some of his Sonoma County "hippie friends" (or with retired Supreme Court Justice John Paul Stevens), and is not calling for the repeal of the Second Amendment.

"I don't go that far," he says and notes that the Second Amendment's original intention was as a bulwark against tyranny.

Indeed, he's wary of ongoing efforts to turn the gun-control debate into a push for legislation to raise the legal age for gun ownership to 21. "I'm not entirely sold on that," he says, arguing that when youth turn 18, they're granted full citizenship—and can be given a gun and sent off to war.

And he's got his own war to fight between now and the June 5 primary. Palsson's hoping to nab some high-level endorsements, and says he needs to ramp up the fundraising.

"I feel pretty strong going into the primary," he says, and if he makes it through and squares off against Thompson in the general, who knows. "People will come out of the woodwork," he says.