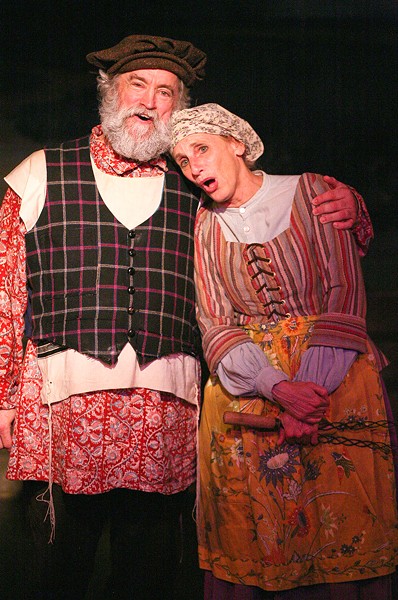 Few American musicals inspire deeper sighs of love, affection, nostalgia and bliss than Jerry Bock, Sheldon Harnick and Joseph Stein's 1964 masterpiece Fiddler on the Roof. Based on the writings of Sholem Aleichem, Fiddler is arguably the greatest American musical of all time.

Fiddler, the story of a Jewish father holding on to his faith and traditions in a rapidly changing world, stands apart form other shows through the sheer emotional power of its sweeping yet intimate story, and for the number of songs in the score that went on to stand alone as instantly recognizable American pop classics: "Matchmaker, Matchmaker," "Sunrise, Sunset," "If I Were a Rich Man," "Miracle of Miracles," "Far from the Home I Love" and "Tradition," quite possibly the best show-starter of any musical.

In the joyously overstuffed production now playing at Cinnabar Theater—an already extended run designed to overlap with Fiddler's official 50th anniversary on Sept. 22—director John Shillington has put the tiny Ukrainian village of Anatevka on Cinnabar's compact stage, with a cast of 40 actors that give the town, and the show, a pleasantly bursting-at-the-seams quality.

In the opening song, as poor milkman Tevye (a wonderful Stephen Walsh) sings of the traditions that hold his community together, the stage rapidly fills with singing, dancing villagers, backed up by a first-rate orchestra under the direction of Mary Chun, and a fiddler (Tyler Lewis, alternating with Claire-Jeanne Martin) who is perched on a stylized rooftop at the edge of the stage, nearly stealing the show as the story plays on.

There are rough patches here and there, a not-unexpected by-product of cramming a lot of action onto so small a stage, but Shillington dazzles the eye with so many clever moments and images—including a towering ghost puppet—that few in the happy, tune-humming audience are likely to notice the rough spots.